ossagp:
Lots of times you can hace cap and wire problems that act like that. Old switches etc .. ttim the plug wire and try a new cap . Sparkies are cheap and work
Click to expand...

Yes trim the plug wire and try a new cap. Also make sure your battery has a decent charge. Taking apart the kill switch or simply spraying it with PB Blaster will loosen up rust and corrosion that may be causing a short in the connections.
C

Found my manual. Thanks anyways. Hopefully I'll have this running for my son for our trip next week.

Chad1452:
Found my manual. Thanks anyways. Hopefully I'll have this running for my son for our trip next week.
Click to expand...

No rush is there? 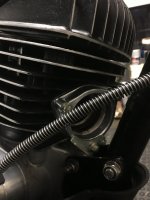 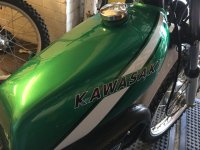 Hi I’m new to the forum.hello everyone.
I bought a 1977 Kawasaki ke250B1 originally it lived in Colorado. I bought from a UK importer,
I’ve fancied the big ke for a long time. Kawasaki never sold the ke250 in the uk. So no spares whatsoever. When I got it home it was in a sorry condition. And they cost a lot more over here too mine was £2000 /2600 dollars
I saw one for sale in fairly good condition for £5500.
My bike had a lot of parts missing, sun bleached tank rusty inside. Ripped seat with rusty pan back light and rear turn signals missing. Cracked tyres but my biggest problem was all the missing parts. But it is a very good bike and it had only done 2700 miles. Like any old Kawasaki it was a joy to work on. At some point I came across big Dans you tube video. Wow that was great to see how good they ran and sounded. Thanks for that Dan it’s the best ke250 video I’ve seen. I bought a lot of parts from Texas including a manual but I bought parts from all over the US.
I think the only part I’m missing now is the toolbox under the seat. If I can work out how I’ll post some pictures.
The bike was built to do a coast to coast trip across four national parks in the Lake District across England. The bike is now finished and running fantastic. Thanks Paul

PaulSPG:
Cheers Dan I’m finding it hard to put pictures and videos on thanks Paul
Click to expand...

You'll need to resiize them for the forum to accept them directly onto our server. (limited space)
Online photos, already with a url, can be hotlinked/pasted into the forum with no restrictions using the photo button.
Use the video button to link videos. -BIG DAN 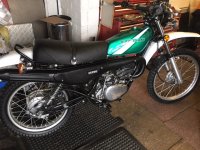 A better picture of the ke250

Thanks I’ll try to put a few more pictures on maybe a small video.
I’m going to take it to Scotland do a 500 mile trip around there, the trip is called the Scottish 500 and it go’s from village to village through historic towns with my wife, she’s going to ride a 1975 Honda MT250. We’ve also decided to drive up to lochness, take the bikes in the van, stay in a hotel on the loch for the night and next morning ride clockwise to the far side of the loch camp there for the night next to a pub carry on around the loch next day back to the hotel for dinner a good night s sleep and drive back the next day.
It should be a good ride on these fantastic 40 yoear old trail bikes,
take our time and take some good pictures, I’m told some of the tracks around the loch are perfect for bikes.
To rough for cars so should be nice and quite. Cheers Paul

Staff member
Sounds like a dream! Be sure to document that trip! -BIG DAN 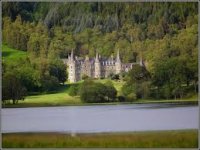 PaulSPG:
Thanks I’ll try to put a few more pictures on maybe a small video.
I’m going to take it to Scotland do a 500 mile trip around there, the trip is called the Scottish 500 and it go’s from village to village through historic towns with my wife, she’s going to ride a 1975 Honda MT250. Cheers Paul
Click to expand...

https://m.youtube.com/watch?v=0kvg2MfcBm0
Hey Paul, I'm up in Glasgow and love the roads up here, on your way up you need to ride the A831 Aberfoyle to Callendar! EPIC!!!

The old Duke of the castle above built the road as a shortcut through his estate, His castle sits at the end of the pass! Just 30 miles north of Glasgow in the Trossachs national park