Hello everyone I am starting a project on my 1998 cr250r, I am going to do the gen 3 plastic on my bike. I figured I would post a thread and show my progession as I go I figured I would have some questions on the way. I will post pics around saturday I just got done taking all my plastic off and I am trying to find a 02+ airbox which I can not find no were. Also is 02 plastics the same as 03 plastics?

Thanks for all replies

so this is the best I could get it cleaned. This is a work in progess so hopefully you guys don't get upset lol. 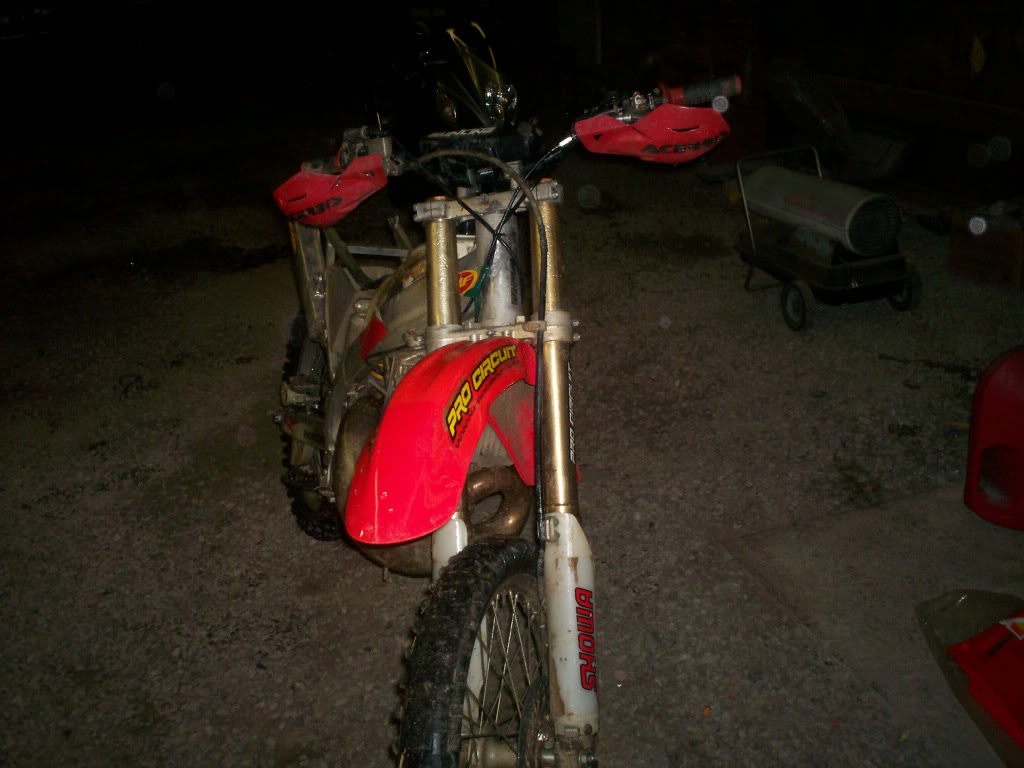 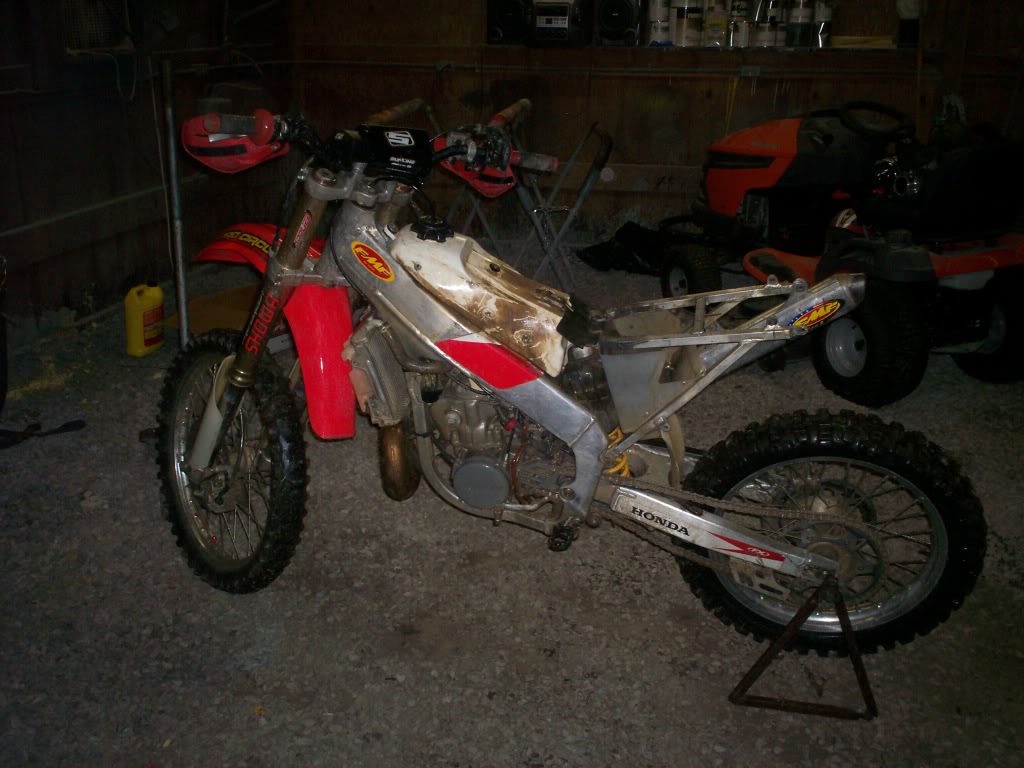 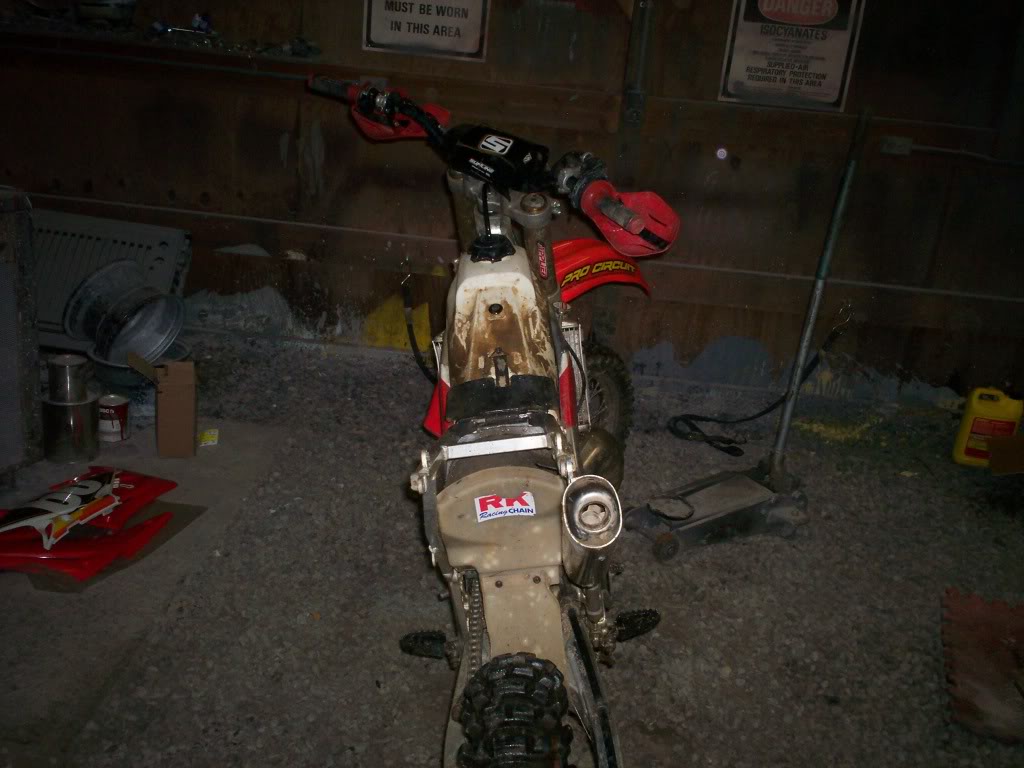 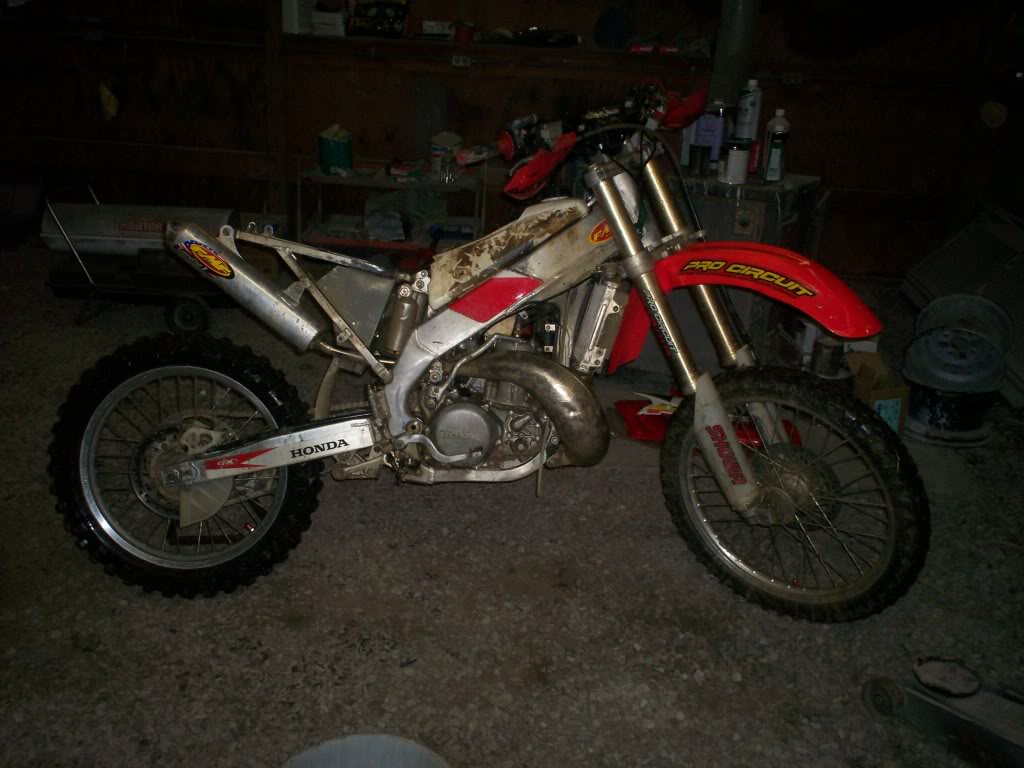 Well I made some progesss today. We achieved to get the raditor shrouds on and the front number plate on, all together it took about 3hrs not to bad I thought. Now since I told you guys about what I have done I figured I would show pics of the bike and the modifications that we had to make the shrouds fit.

The first bracket that I am going to show is the right raditor shroud. All that I done was took a digrinder and cut some metal off of a frame that we had and it was approximantly about 3 1/2 inches long and about 1 inch wide so after that I sanded the piece of metal and spray painted it black. After I got done with that step I bolted it on the frame and then just started to bend it were it would fit and then bolted it up. It was not that hard suprisingly just took some time. Also it did not require no bracket to the raditor we just had to shape the plastic alittle bit. Now that I explained the right raditor shroud I am going to try to explain the left raditor shroud the best I can it was a pain in the butt

First I took the digrinder again and cut the frame again and made the metal approxmantly 3 1/2 inches long again and 1 inch wide.(I forgot to mention this is bracket goes to the frame.) Then we bent the piece of metal approximantly at a 45 degree angle then we bolted to the frame and then we just put it on and it worked fine. Another thing that I forgot to mention again was that I took a drill bit and drilled a whole in the bracket were the bolt could go through and screw into the plastic and the frame. On the bottom bracket that goes to the raditor I had to take the digrinder and cut the piece of metal off of the frame and it was approximantley about 4 inches long and 1 inch wide, after that I had to drill a whole in the metal and then made it into a U shape. Pretty much after that that bracket fit just fine and bolted right up. I hope you guys and gals like the thread it has been some work put into this bike and I hope I get some replies. 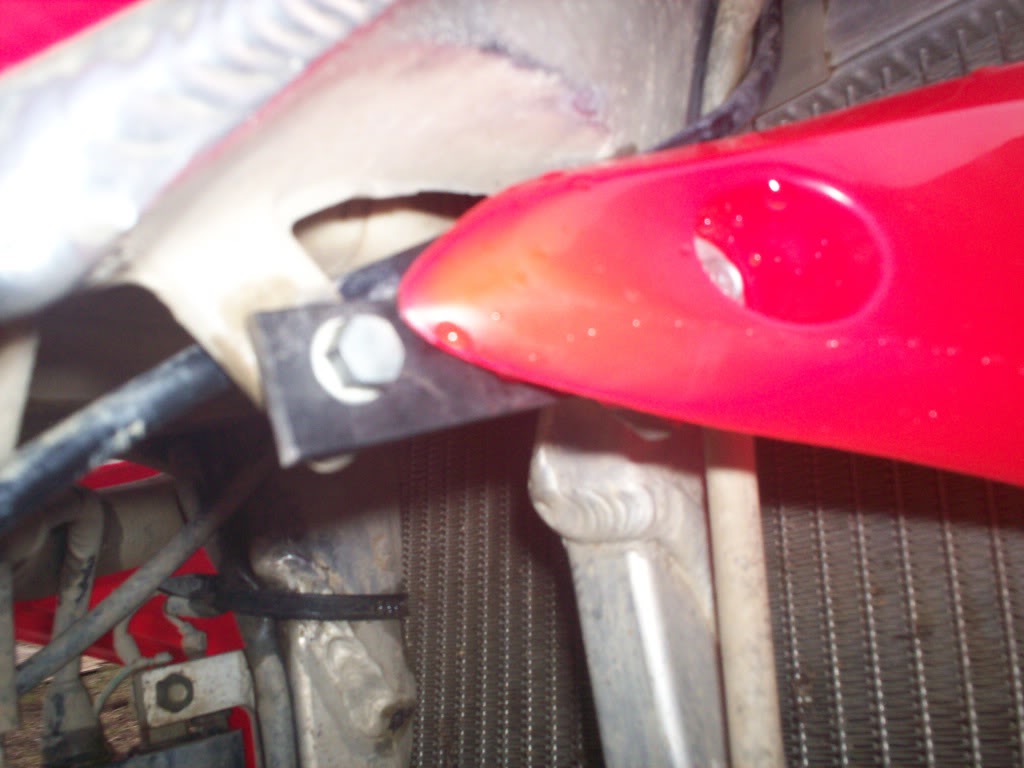 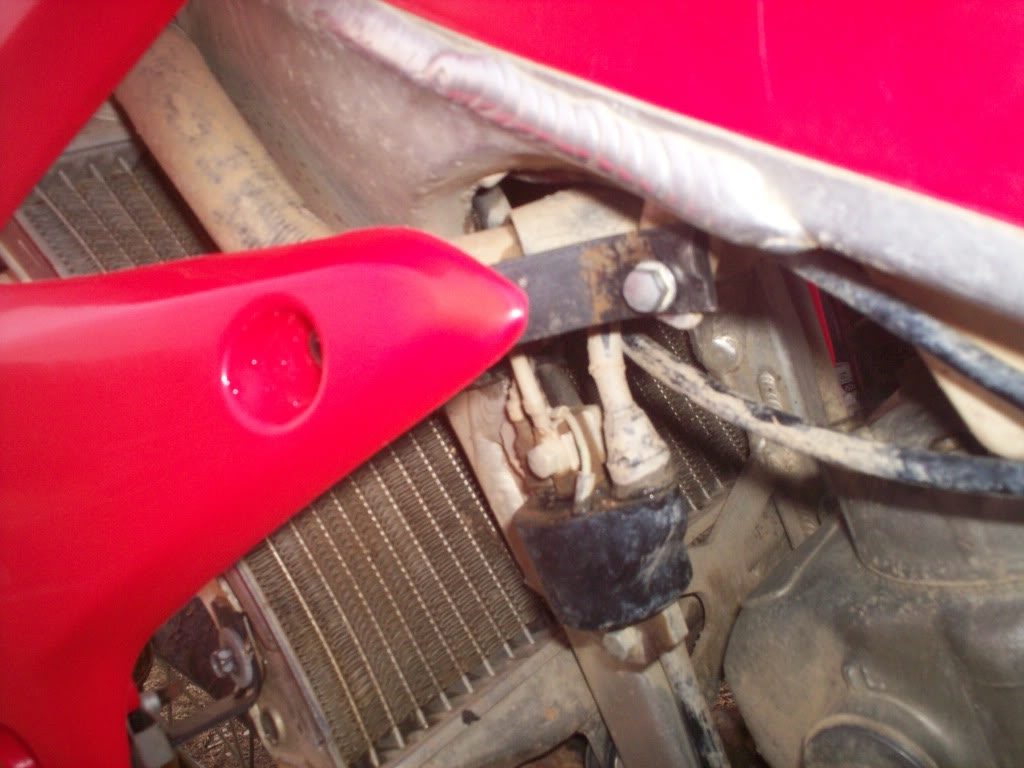 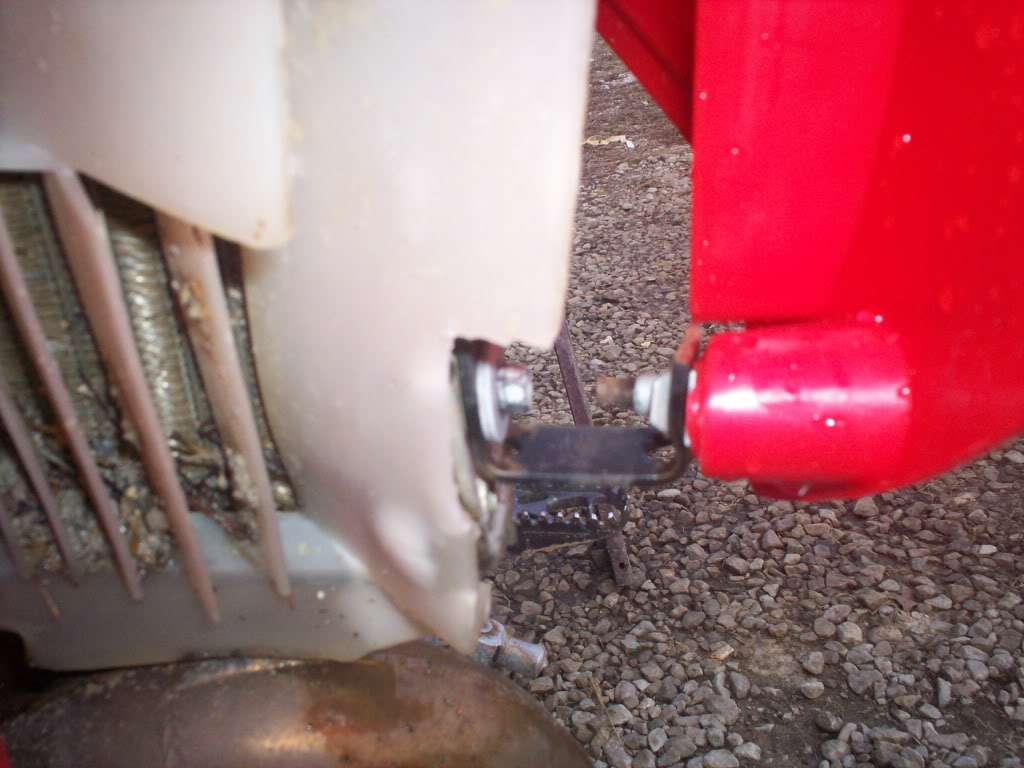 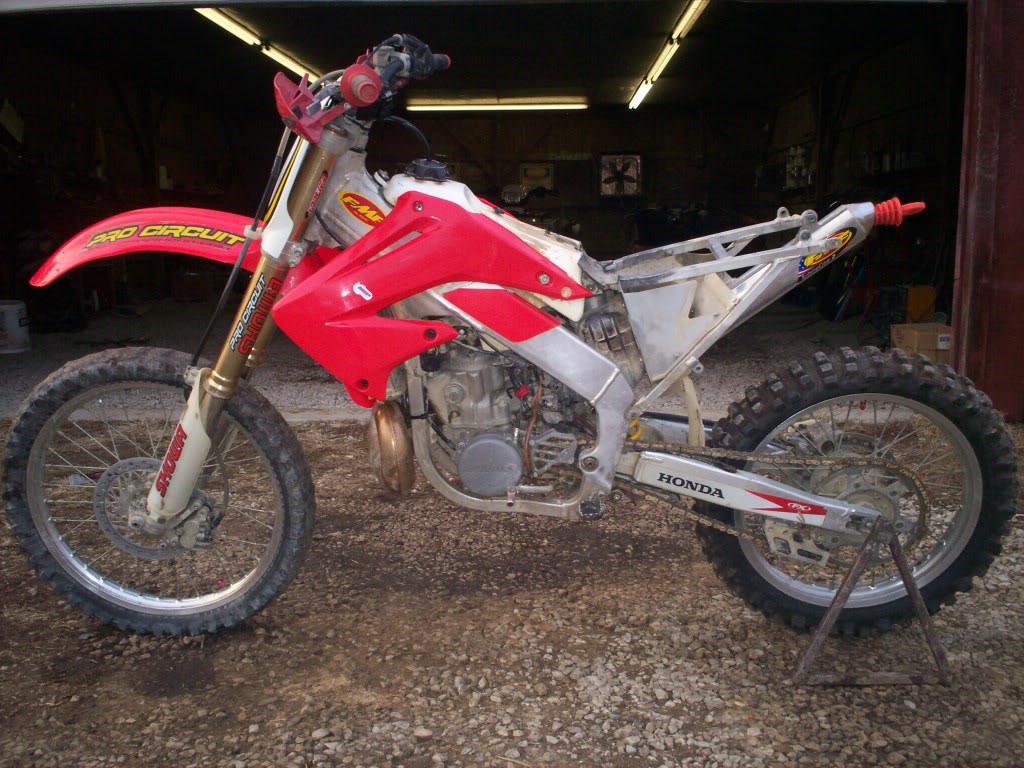 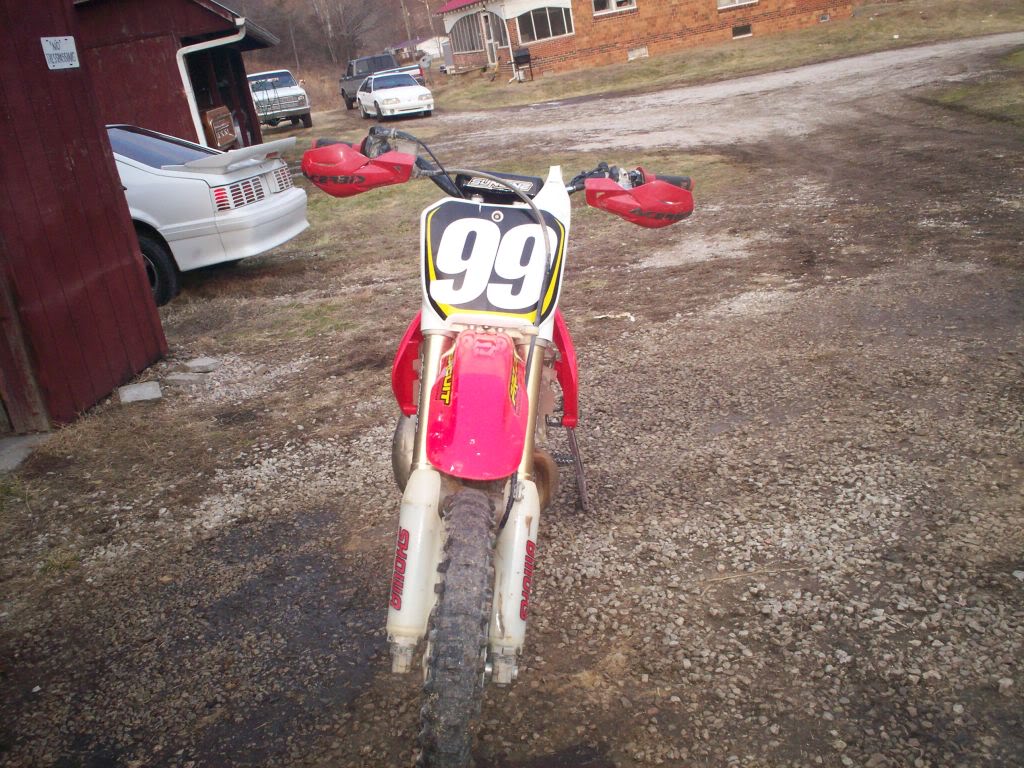 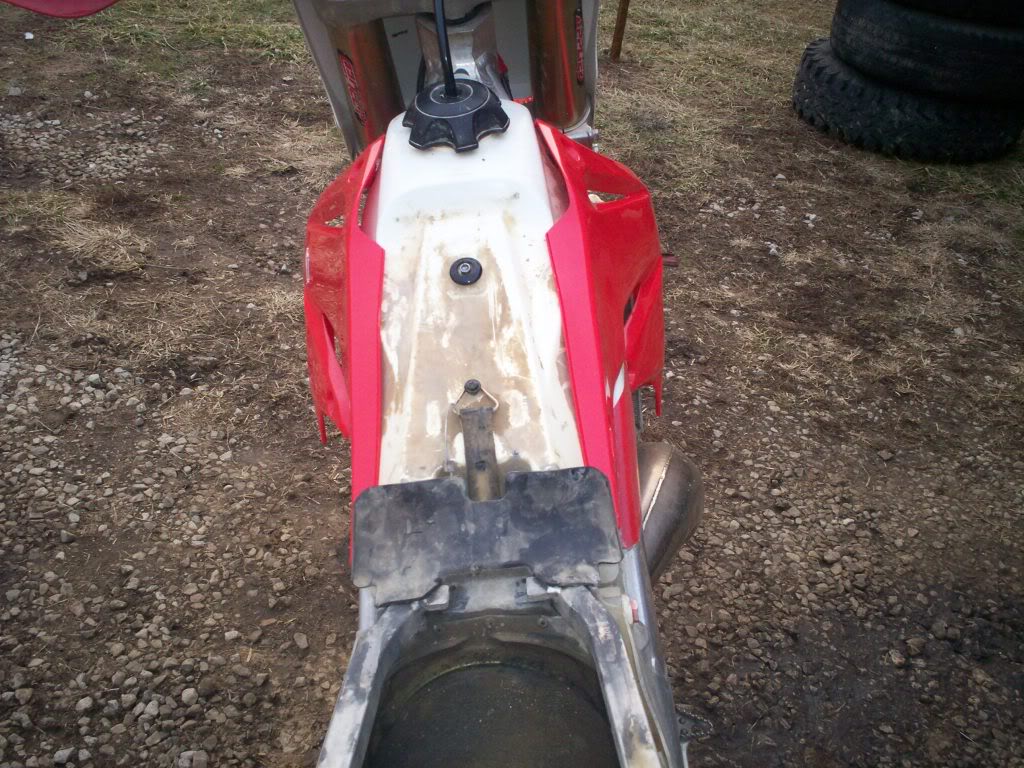 Well I got more accomplished on my bike tonight worked on it about for 4hrs today and this is all that I got accomplished. I got the side plastics on without a 02+ airbox which I will explain here in a minute, and I also cleaned up the bike which I am not done I am waiting for my seat to get done which it should be done saturday and I still need a rear fender, graphics and a air filter and then I should be done. Ok know to the side plastics. The first side we put on was the right side so we first just looked at what we had and then we went from thier. The next thing that we done was made a bracket that was appromantley 2 inchs long and a inch wide and then we drilled a whole in the bracket so it would mount up to the bottom of the sub frame and then we had to modify the airbox. We first drew a outline around the tabs on the side covers so were we would know were to cut around the airbox. The next thing that we done was just mainly cut alittle bit and just tried to make the best fit we could. Here is a pic of the right side cover. 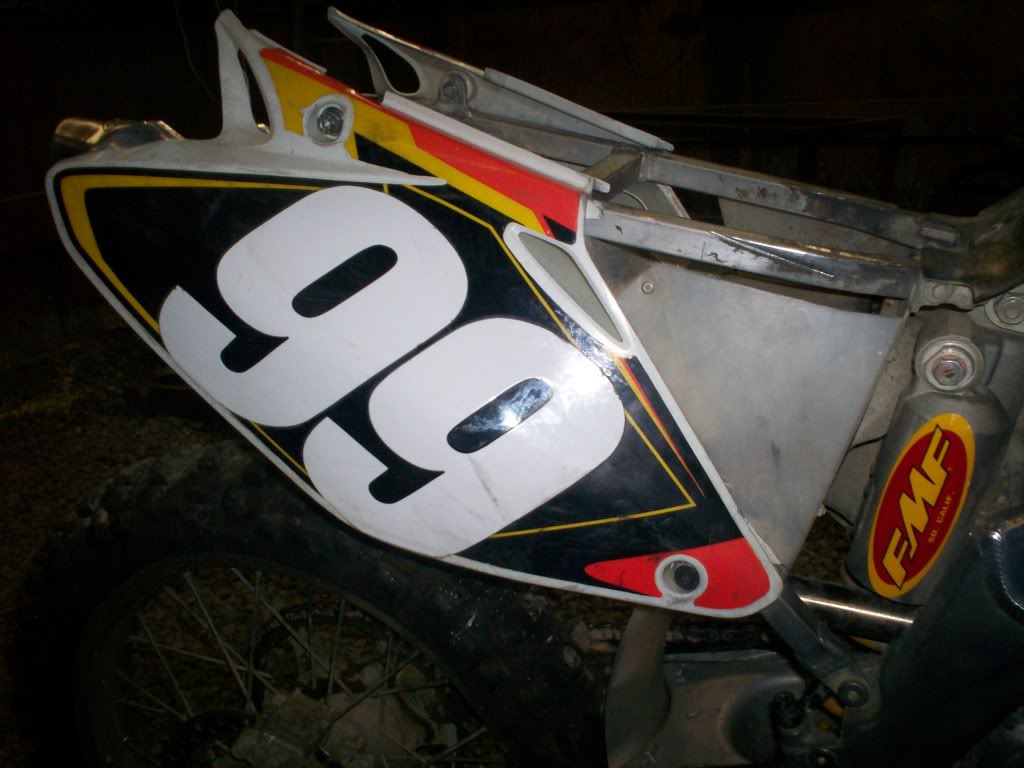 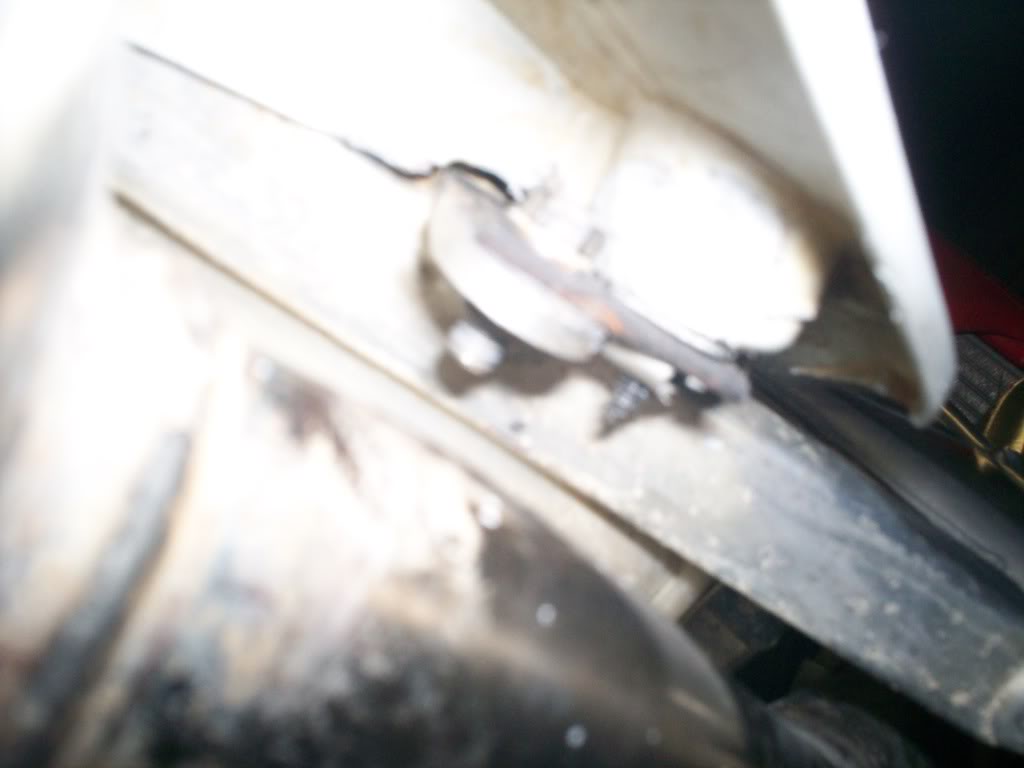 Know on the left side cover we done the same thing no different. This may sound easy but it takes alot of time and just measuring but it is all worth it at the end. Sorry that I did not take a up close pic of the airbox. 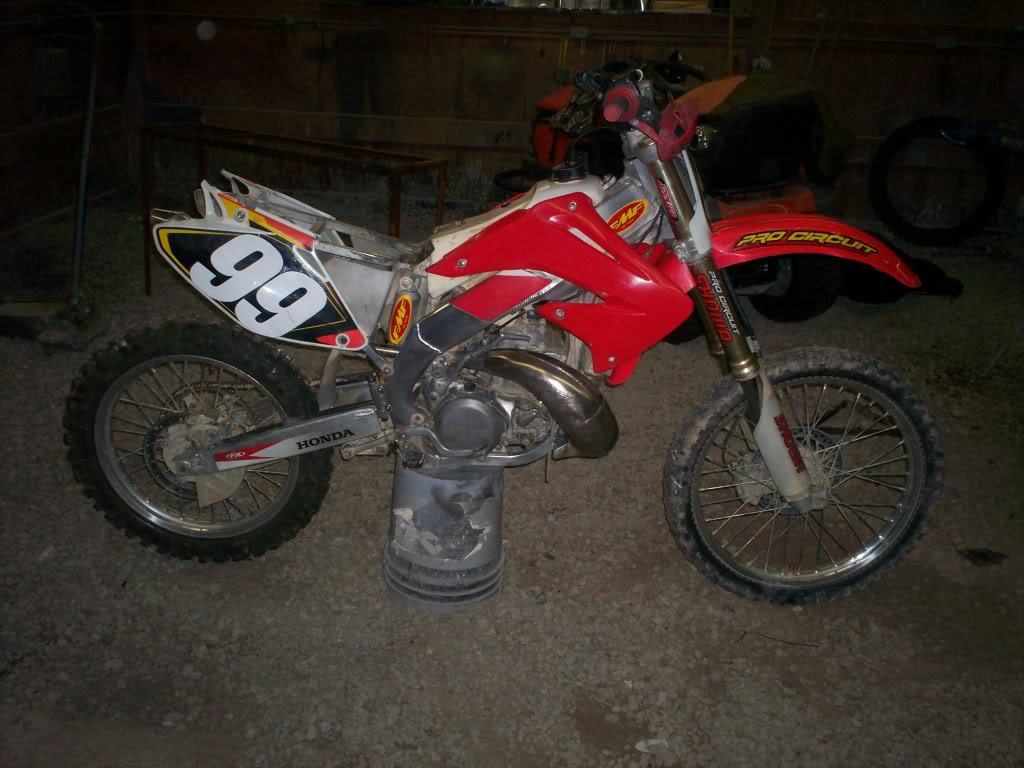 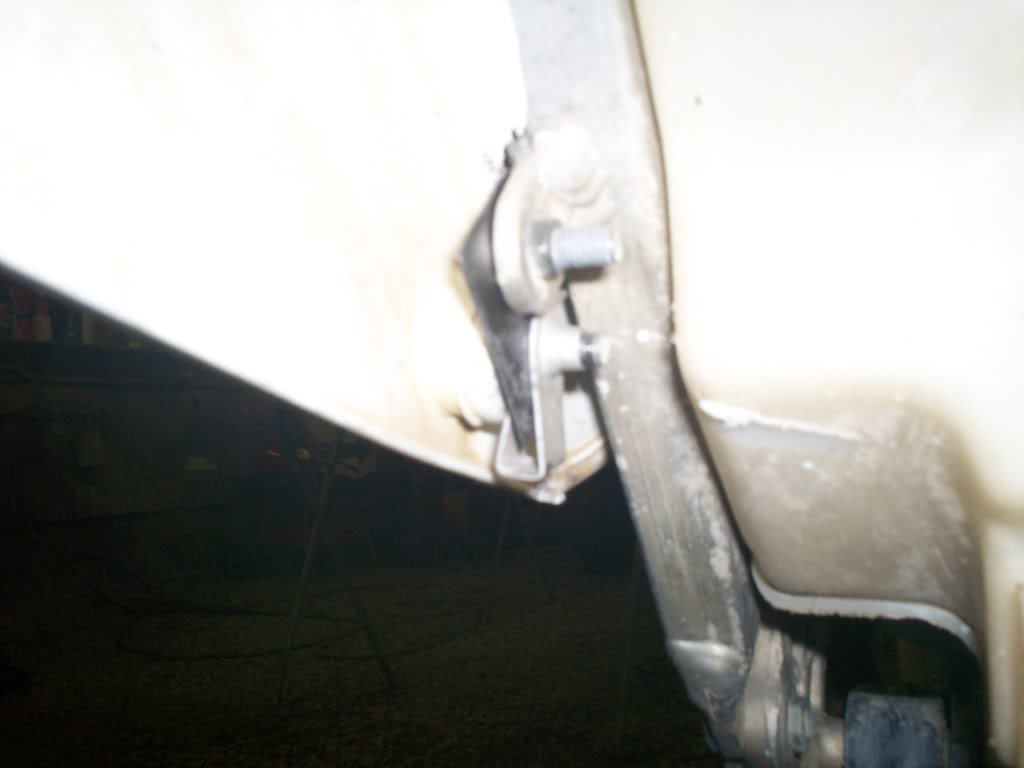 Here is pics of the bike. Hope you guys like the thread this is still a work in progess. 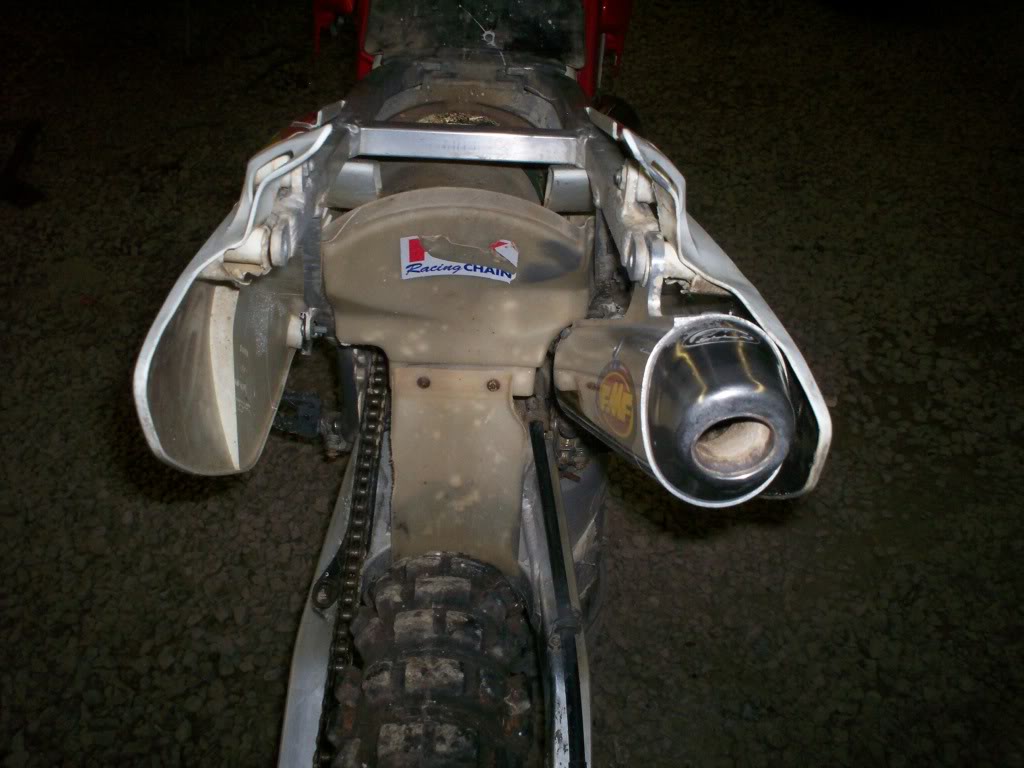 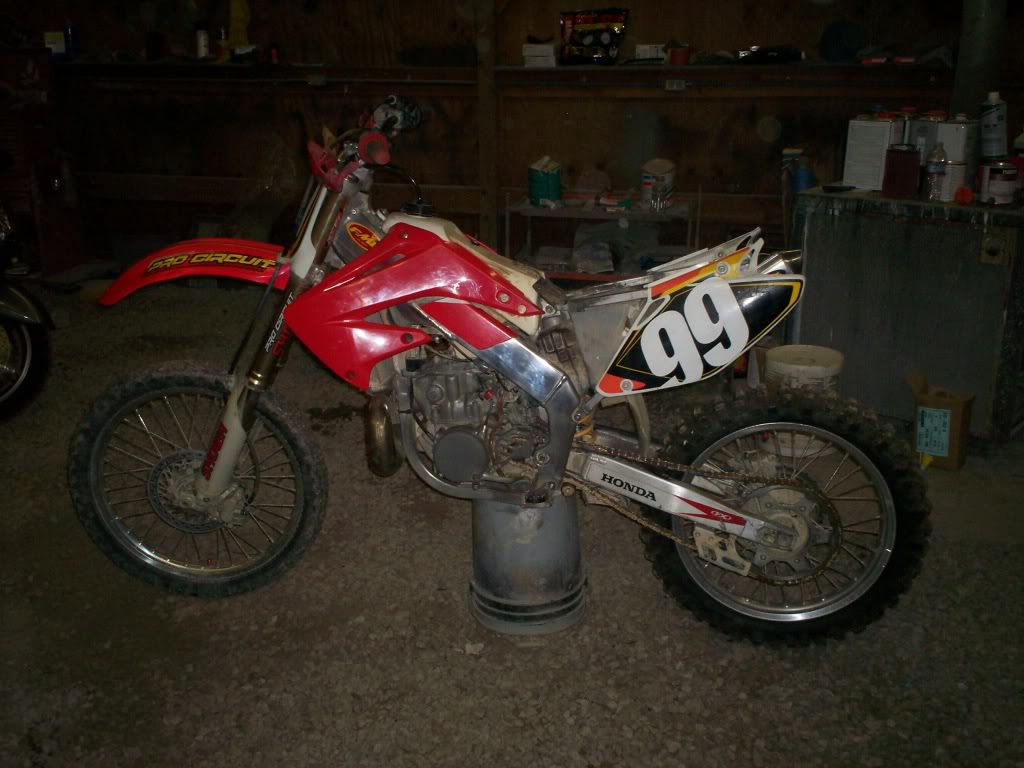 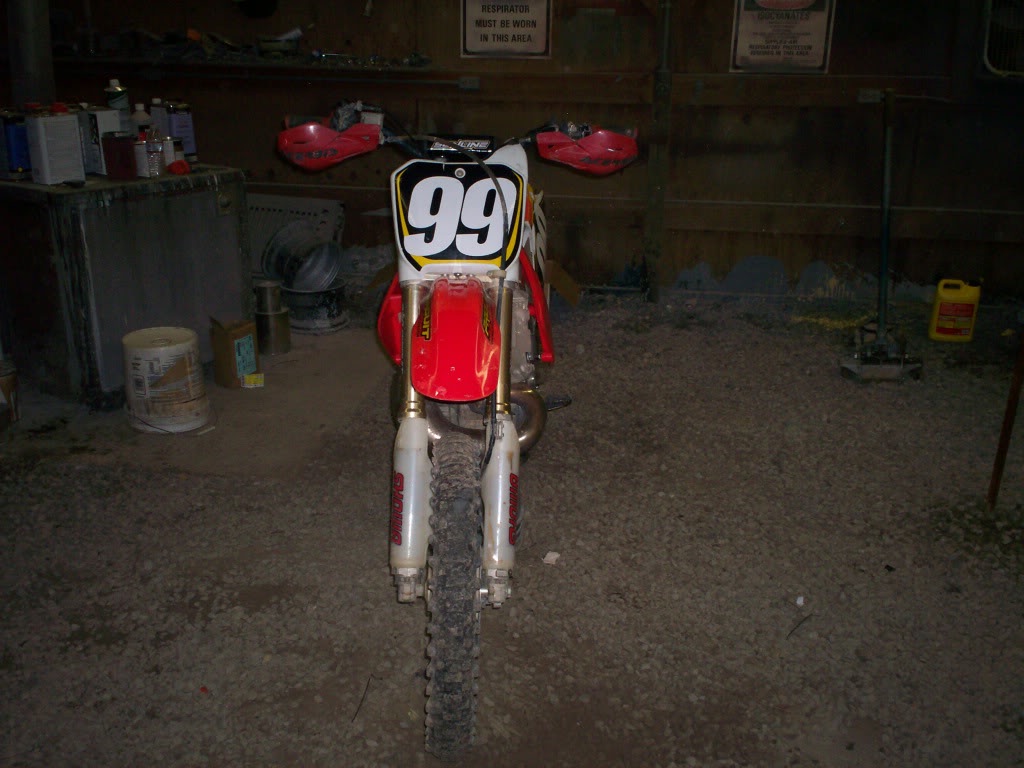 Well I worked on the bike again tonight I worked on it for about 4hrs. I mainly polished the frame and took the front tire off and dad painted the airbox black. See what you guys think so far. Feel free to post anything. 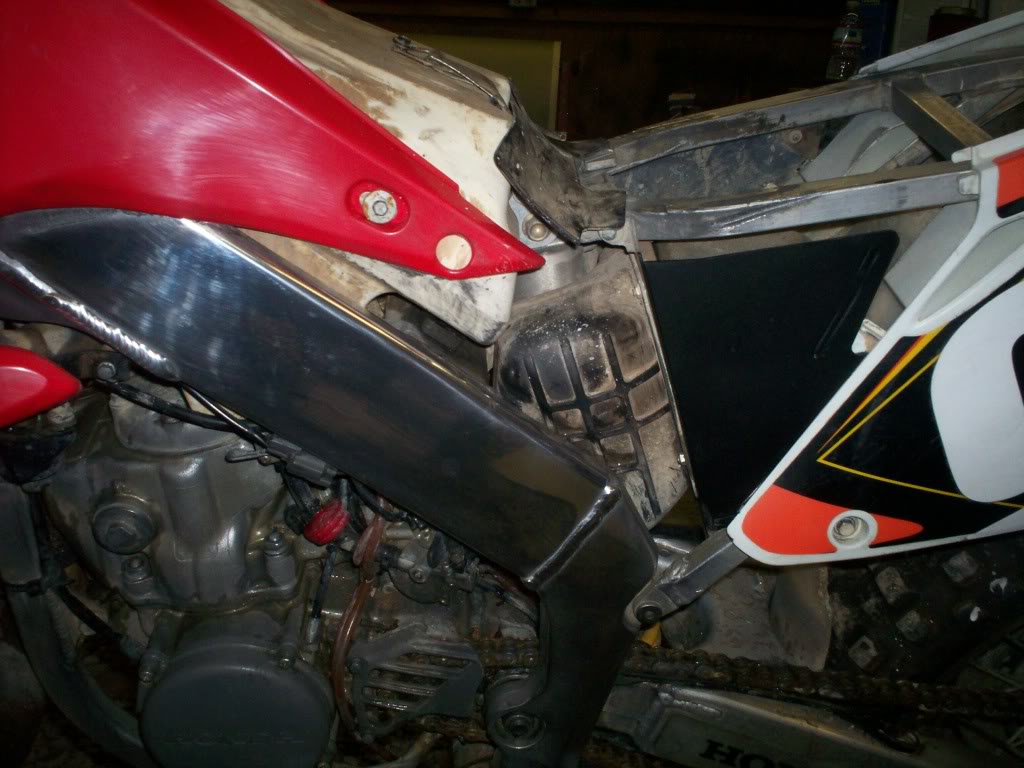 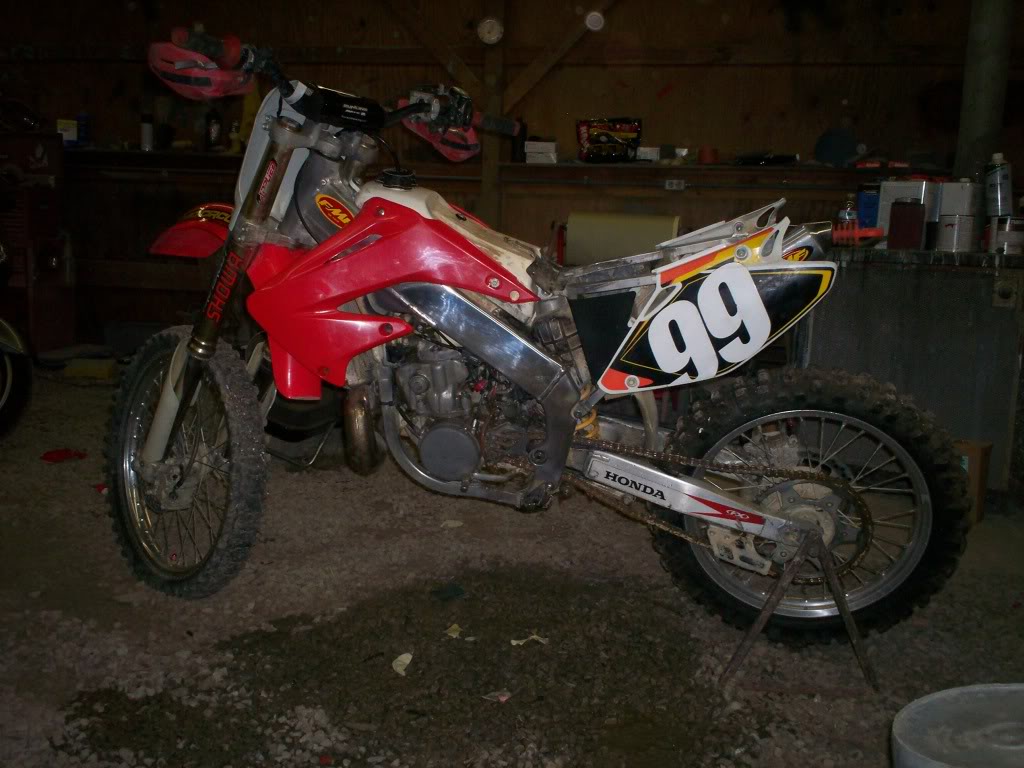 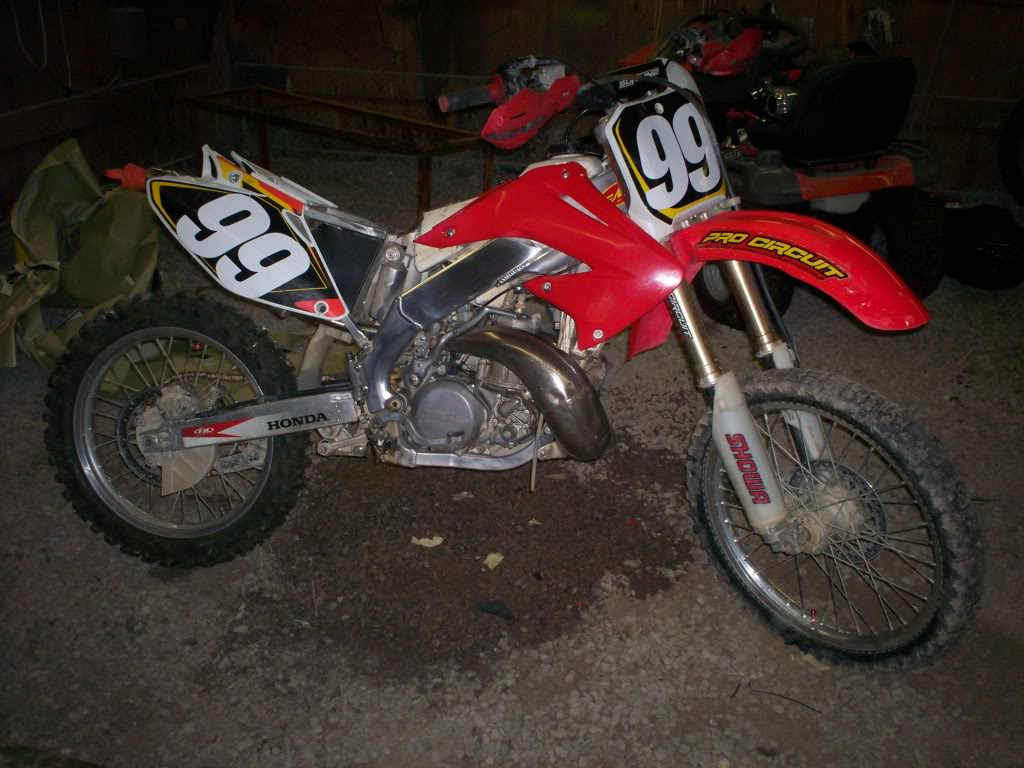 well i'll break the silence, it looks like a fun job. it looks great IMO, i hope your having fun with it

and put on my front tire I will post pics tonight

Nice report, although it is fun that we joke around a lot here, fact is we need more threads like this.
Good stuff, keep posting photos of the progress.
Roost for you.

Thanks, I will post pics this saturday I ran out of gas in heater.

Looks like you're progressing pretty well, keep us updated.

If you need something to clean the dirt/grease/grime off I'd suggest Scotch Brite pads and Engine Brite Cleaner. I've also used a generic stove cleaner I found at Dollar General, a lot cheaper and does a decent job. Here's what I did https://www.dirtbikeaddicts.com/forum/kawasaki/240-kx250f-engine-clean-up.html

Check your chain the next time you go work on the bike, it seems a little loose, could just be the picture though.

The chain looks loose because it is on the bucket that is why I was wandering the same thing here just a few days ago when I done that.

onefasthonda:
Hopefully I don't half to take my enigne out just to clean it

I was bored, plus I already had the swing-arm off, so it was only a couple bolts to remove. And I also wanted to clean up the frame.

onefasthonda:
The chain looks loose because it is on the bucket that is why I was wandering the same thing here just a few days ago when I done that.
Click to expand...