Well I did something I don't care to do, but I had no choice. I didn't have anyone to ride with this weekend so I went alone. I knew where some guys were going to meet for lunch on some jetboats so I decided to see if I could meet them on my bike. It was a gorgeous day with a high of about 85 degrees. I had a rough Idea of where I needed to go but wasn't totally sure. The bike was fueled and I was iching to go.

I unloaded the bike and tore off in search of the meeting point. The trick was I was on top of the flat desert and had to find the right roads to get down into the canyon. There is only one way in and out. So across the flat I go

and oh my god did this road suck! Anywhere from 6"-12" of moon dust. It flows like water and is thinner then flower and just flat sucks to ride in!

So not only am I on edge riding alone but now the bike is constantly floating and jumping around in this loose stuff. After 3 miles of this I say enough is enough and Jump into the sage brush and start a new route.

All was going well until I hit a badger hole that sent me in the wrong direction! Thank god I was standing and was able to keep on the bike but by the time I had recovered.......well lets just say I was heading towards the truck. I whip it around and back on the shitty road.

another 3 miles of this crap. Finally the road turns to rock!

The road now was cake and could have been driven in a car. I was loving life and just enjoying the ride when I came to a split. To the right the road went above the dam to the left it went below. I needed to be below the dam so off I turned off. The road was a little steeper and again nice moon dust. The 4x4's had tore things up pretty bad trying to get out and made some monster dust bowls that you never new how deep they were.

I took it extra careful and worked my way through until finally reaching my desination. Only problem was there were no boats.

Well they must not have made it there yet. So I deside to see how far I can go down the river. The two track was awesome! Kinda dished out and smooth as a babies butt. I got a little excited and had the ole WR opened up and crusing about 40 mph.

After about 5 miles the road ends and turns into a trail. I start working down the trail and wondering if I should call it good when I finally I see a string of jetboats heading up the river.

Its lunch time baby! So I spin around and head back for the beach. After about 3 hours of walking on the beach eating and enjoying the cool water everyone is ready to head out. I say my good bye and head up the road.

Again fighting the dust and the nasty road, I hit a spot that there is just no way around. You have to take the road. So it was right rut or left rut........Well the right rut looked smooth so I went for it.

All was going well until I found the hole. The front tire started to drop so I kicked it down a gear and gave her hell. Dirt flew, the starting sinking and well I let off when the front end was about a foot higher then the rear and I could no longer see my pegs. The bike had sunk and was not getting any traction just settling deeper.

I turned off the bike and stepped up as I got off the bike. The powder just flowed back into the hole. There sat my bike in a dust hole buried to just over the pegs and the rear tire was completely covered.

I heaved and hoed and pulled but the bike was stuck!

I needed help but no one was around. What was i going to do? The bike was just too far in the hole and I couldn't lift it high enough to get it out. After some rock packing and working the bike I finally got a couple rocks where they could slide under the tire. Now I could hopefully I could get bike out of the rut and be riding again. I grabbed the bike at the fender and lifted there first. I literally stood over the bike and reached down below my waist for this first pick. The rocks flowed down under the tires and now it set a little higher. I reached down and grabbed the swing arm and started to lift and fall all at the same time. I MADE IT! The rear of the bike was out of the hole. I grabbed the front and pulled it over the hump and we were ready to

Now that I was under power again I booked out of there and hit the top. Not wanting to go home yet and not liking the road I would have to ride I desided to try some other roads. After a few ended on top of the canyon wall I found one that went across the desert. here I was crusing along when 8 antelope jumped up beside me. The race was on! I opened it up and paced them for about a mile (Man they can run!) Then they started towards me. What the hell were they doing?

Now they were closer, and closer, they were going to run into me. I got all over the brakes and they hit the road and went through the gate and then headed across the desert. That was good and exciting but I'm not sure it was very smart

The road I ended up on just kinda cruised around the country. It was fun, it had nice gentle turns, it was nice and hard but kinda rutted to where you could stay in the rut and really keep in the gas. I kept the gas on pretty steady the whole time and just enjoyed the cool air.....wait what the hell. Its cool! Shit a thunderstorm had formed and it was gaining fast. Thunder and lightning headed my way and I needed to get out of dodge since I was the only metal thing out there and the tallest thing out there.

Well half way back it hit. It rained so hard if I would have had a place to hide I would have. But there was nothing. I was a little wet and cold when I hit the truck but when I got to the truck the storm was over. The sun was coming out and I figured screw it I will dry out and there is more day light.....

Lets Ride! Again I was off checking out a few more roads.

After a while I had dried out and I was starting to think about the sun starting to drop so i figured I best head for the truck before I get into trouble and it got dark on me. After a quick trip back the truck I loaded up and headed for home.

friends cause the day could have ended a lot different.

I didn't think about taking any pictures of my bike when i was stuck but I did take a bunch of others that I will post a little later.

so is your name GEORGE THOROGOOD?

yeah man, some pics would be nice. I usally ride with my boy so atleast someone is there if things get bad. If you are going to ride alone you ought to look into one of those GPS alert responders things. If you get hurt or lost you can hit a button and it calls out for help. It is a monthly fee but better safe than sorry.

jackson409:
yeah man, some pics would be nice. I usally ride with my boy so atleast someone is there if things get bad. If you are going to ride alone you ought to look into one of those GPS alert responders things. If you get hurt or lost you can hit a button and it calls out for help. It is a monthly fee but better safe than sorry.
Click to expand... 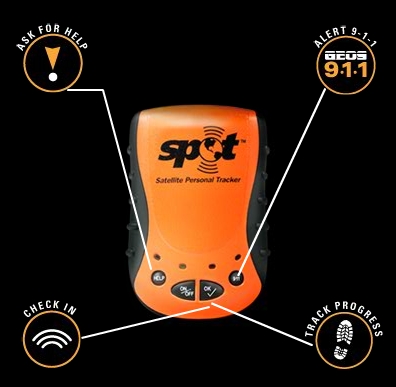 jackson409:
yeah man, some pics would be nice. I usally ride with my boy so atleast someone is there if things get bad. If you are going to ride alone you ought to look into one of those GPS alert responders things. If you get hurt or lost you can hit a button and it calls out for help. It is a monthly fee but better safe than sorry.
Click to expand...

I have looked into that and we are buying one soon. We need to have them, there are so many areas we ride were we don't have any way to communicate if something did happen.

Travace:
so is your name GEORGE THOROGOOD?

Ummm yeah BAD TO THE BONE!

Watching the boats come up the river. 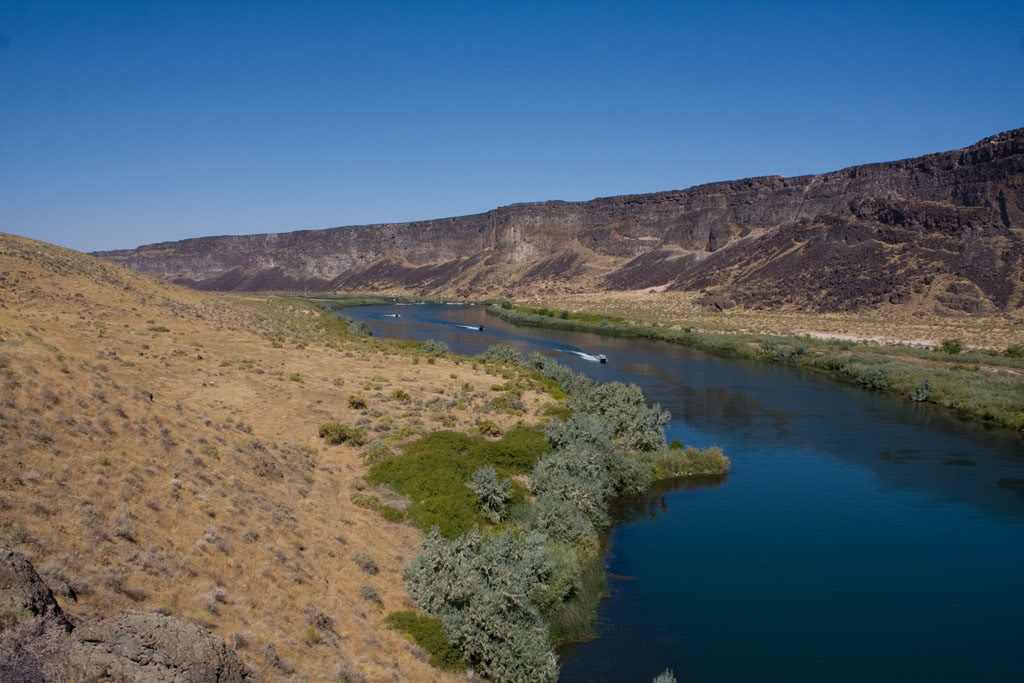 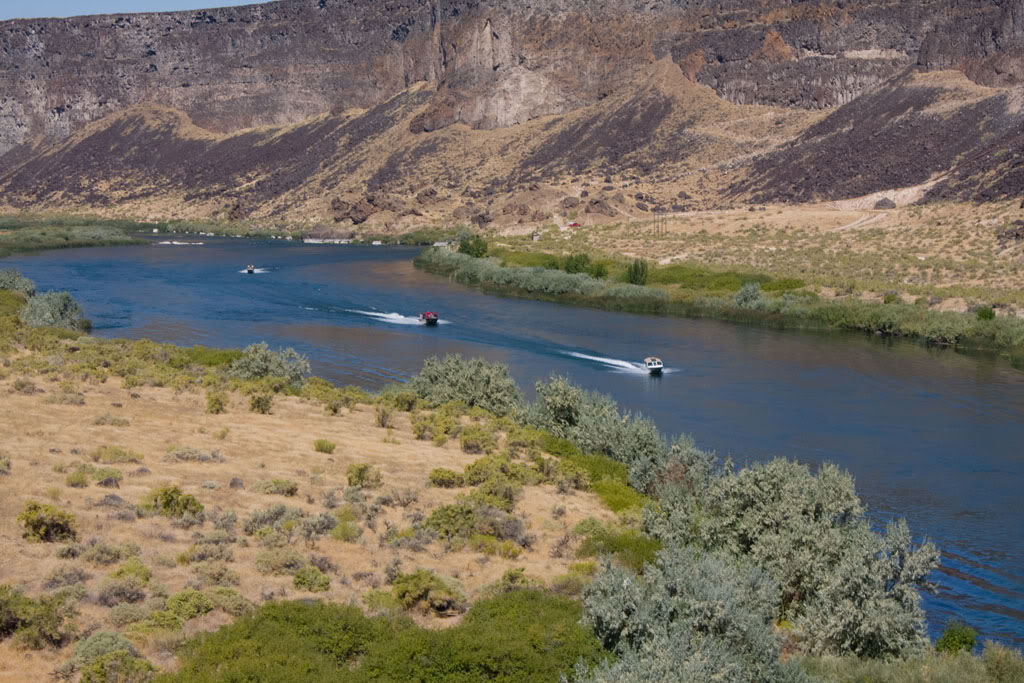 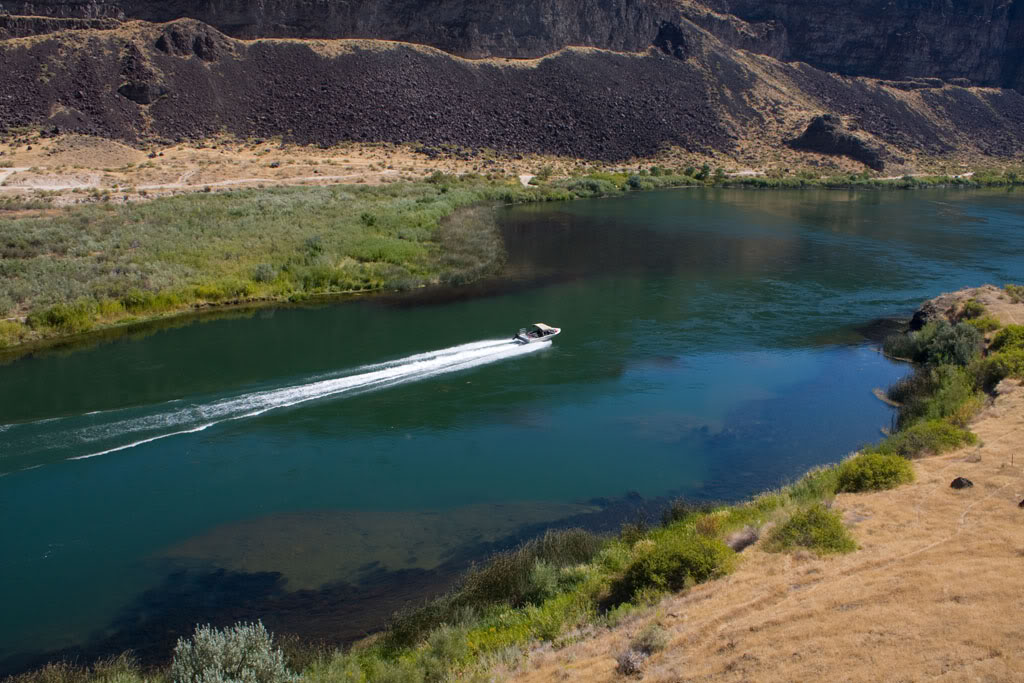 The beach for Lunch! 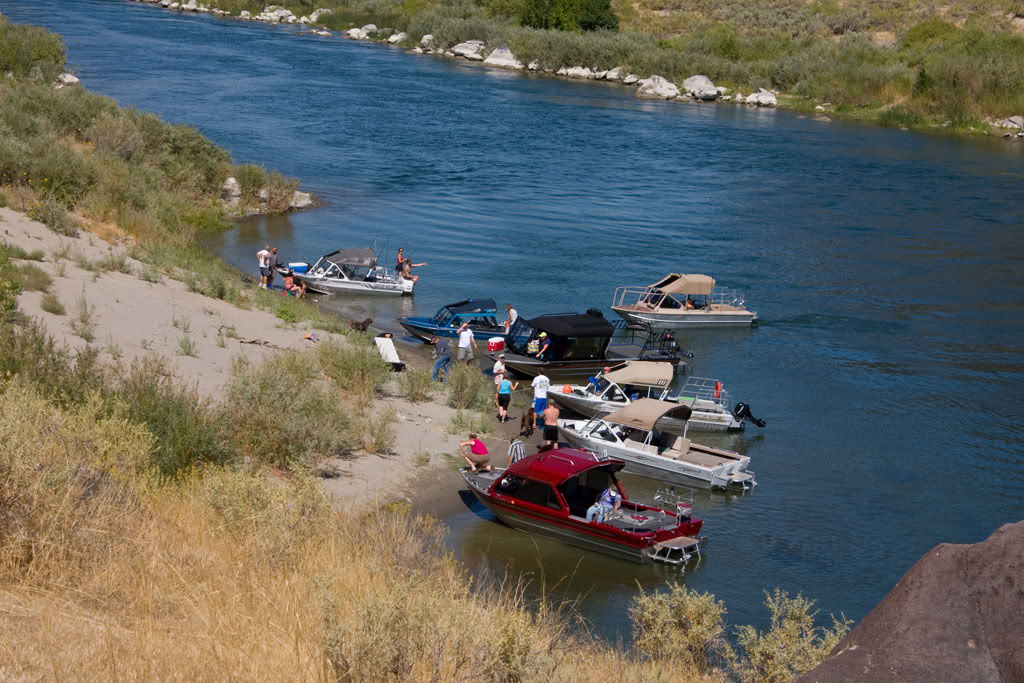 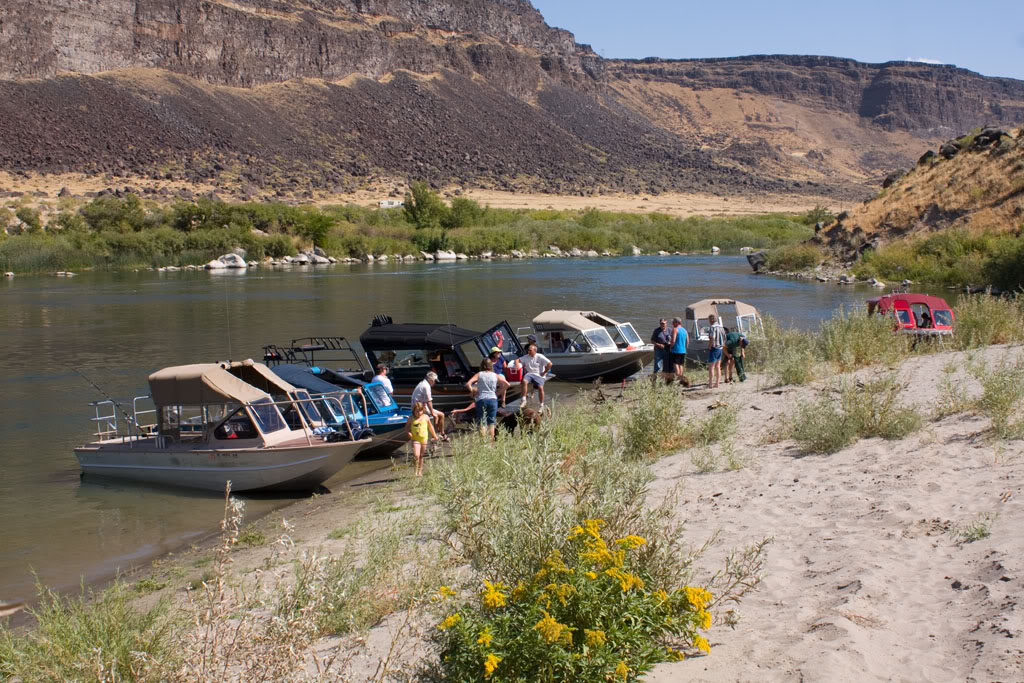 Watching the boats go down the river from the top of the canyon. 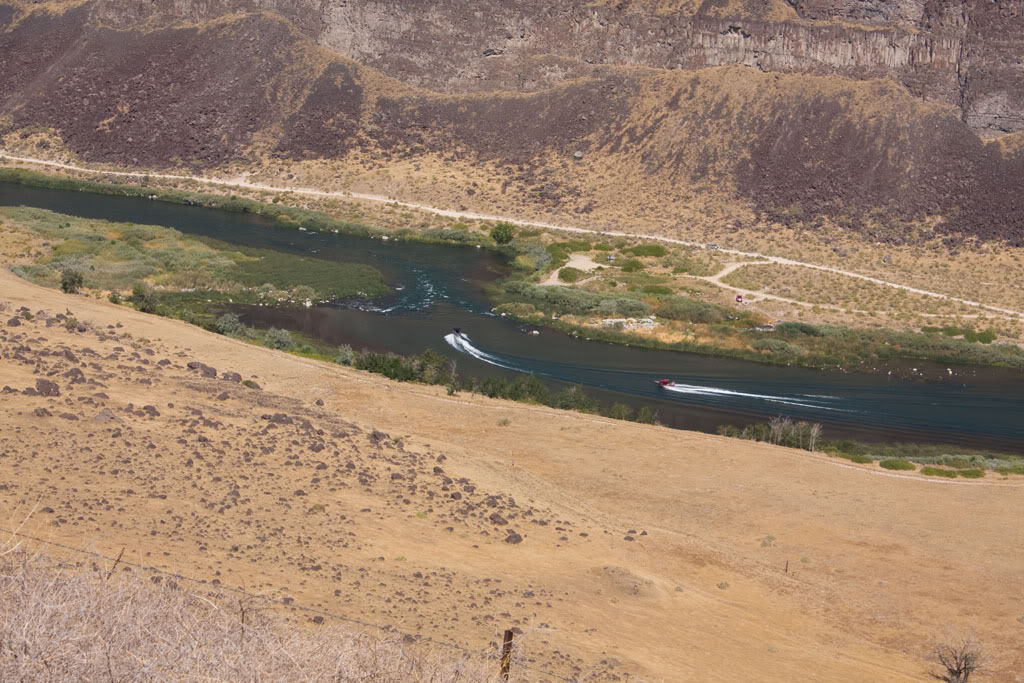 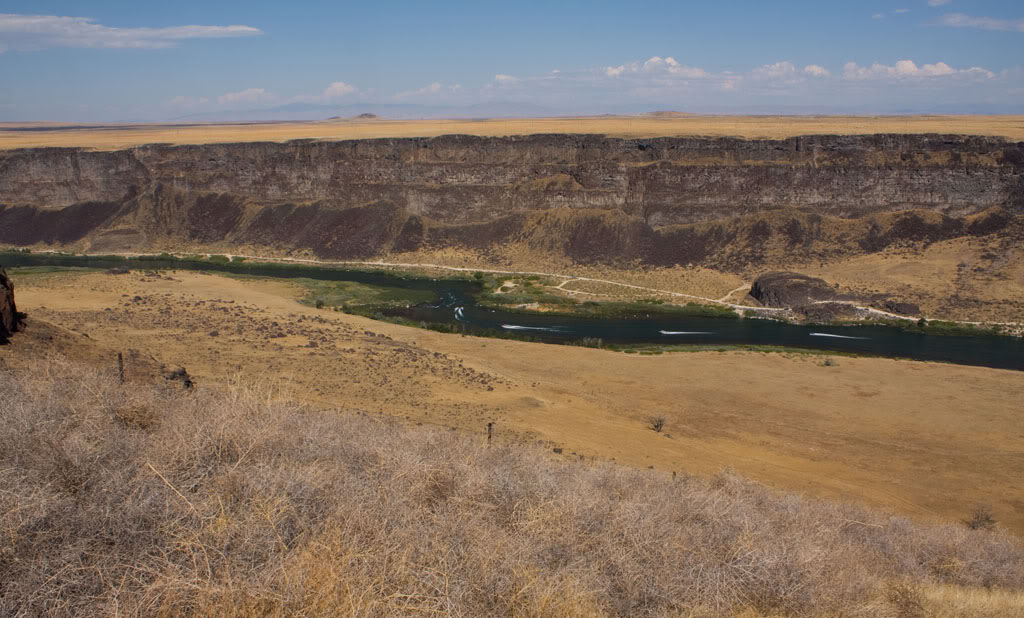 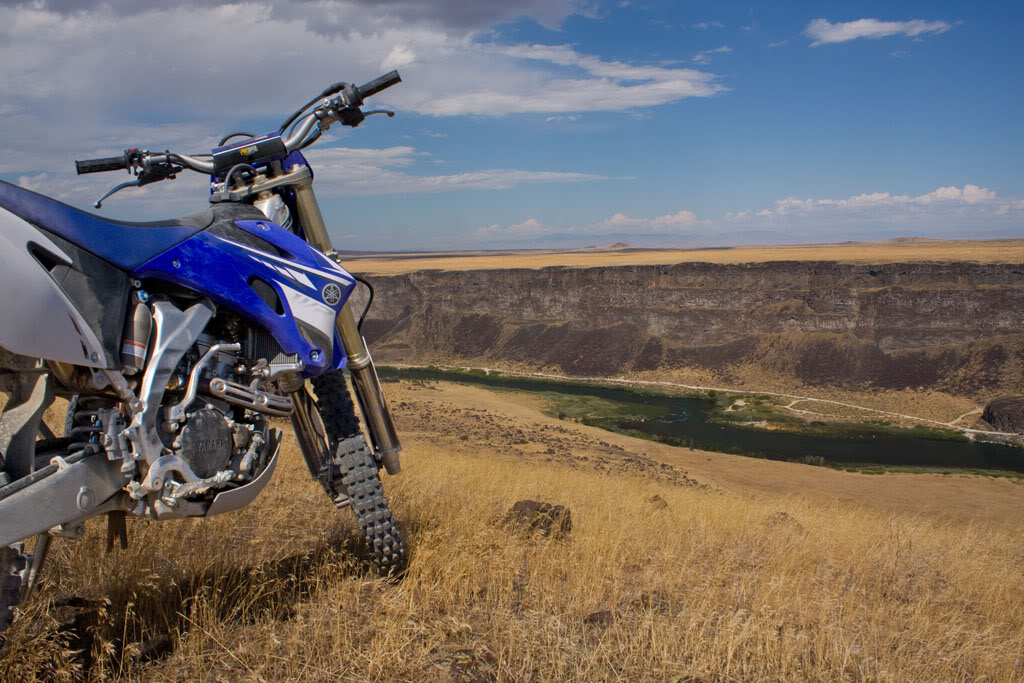 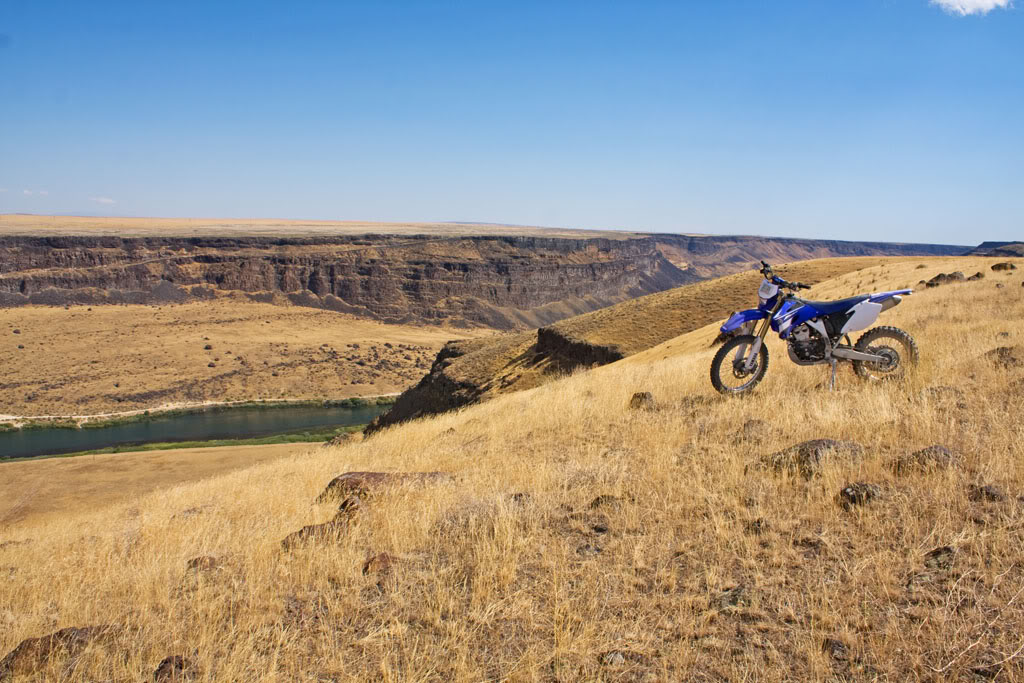 Another spot I rode too. 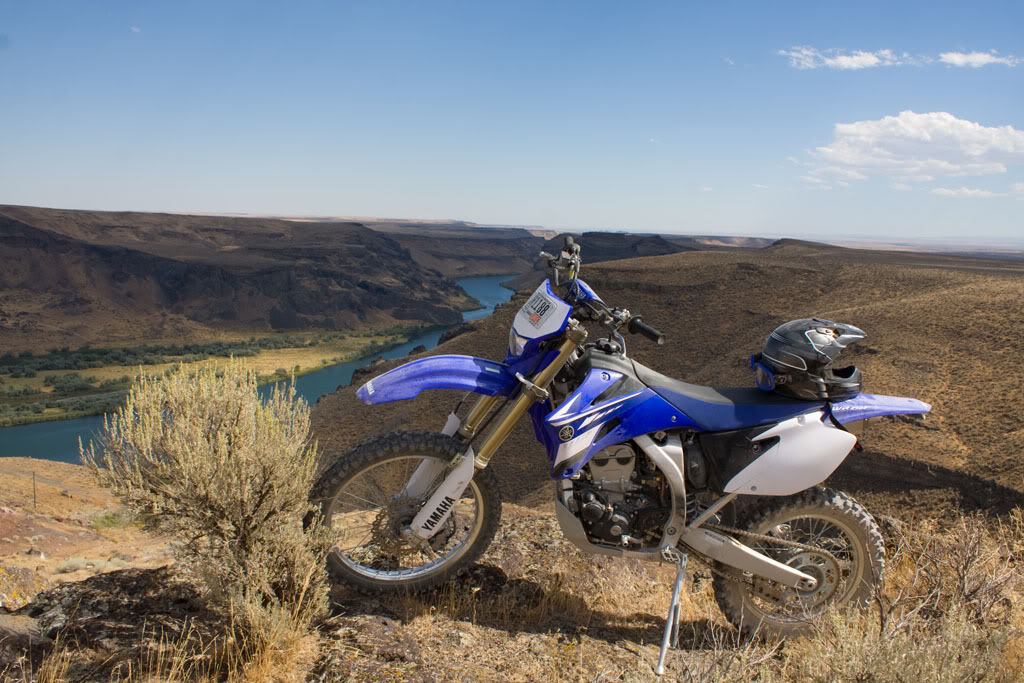 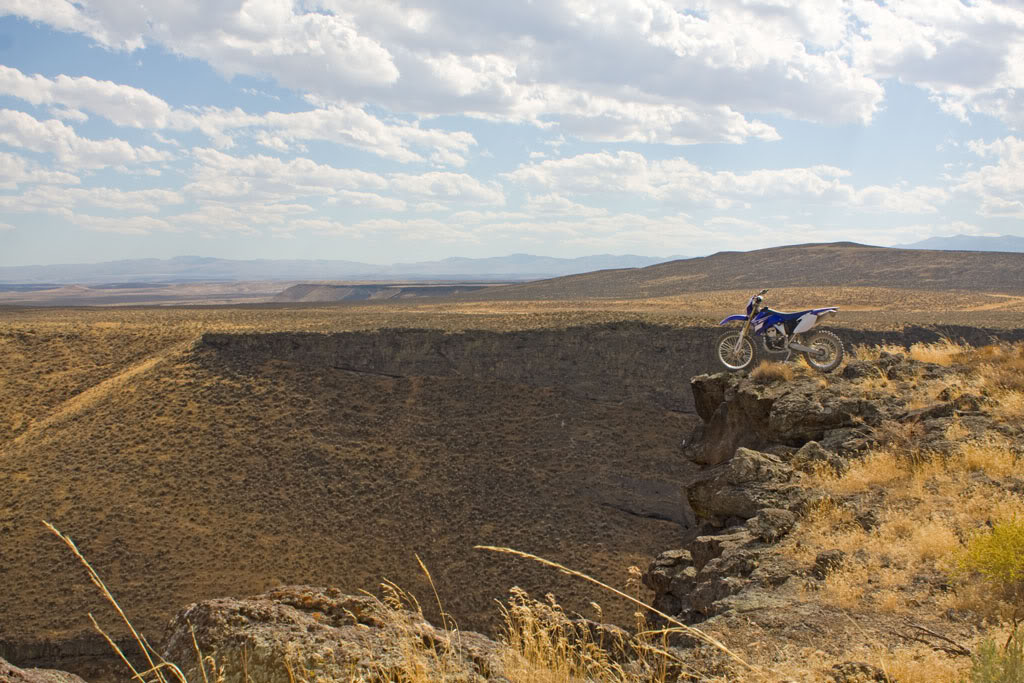 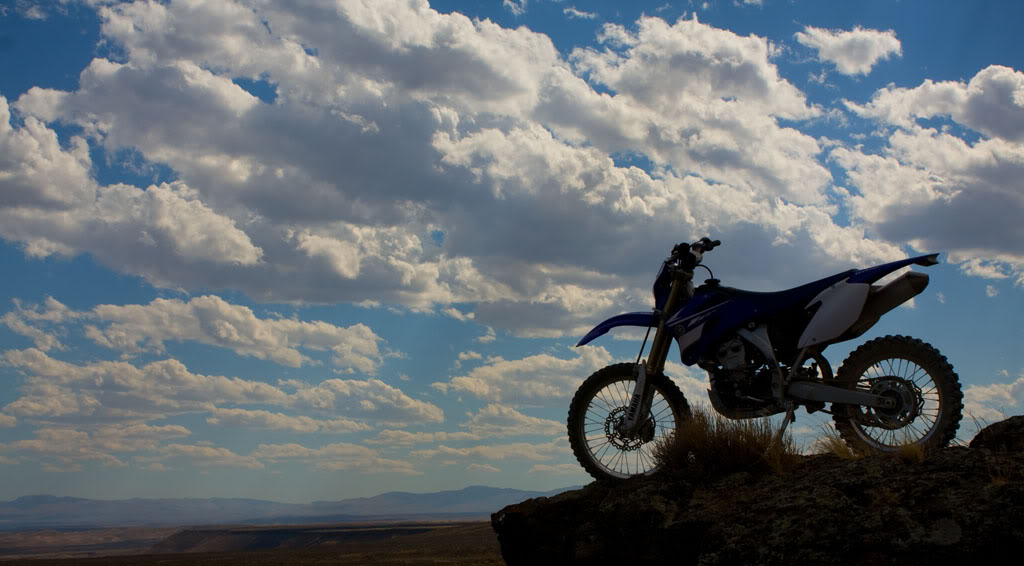 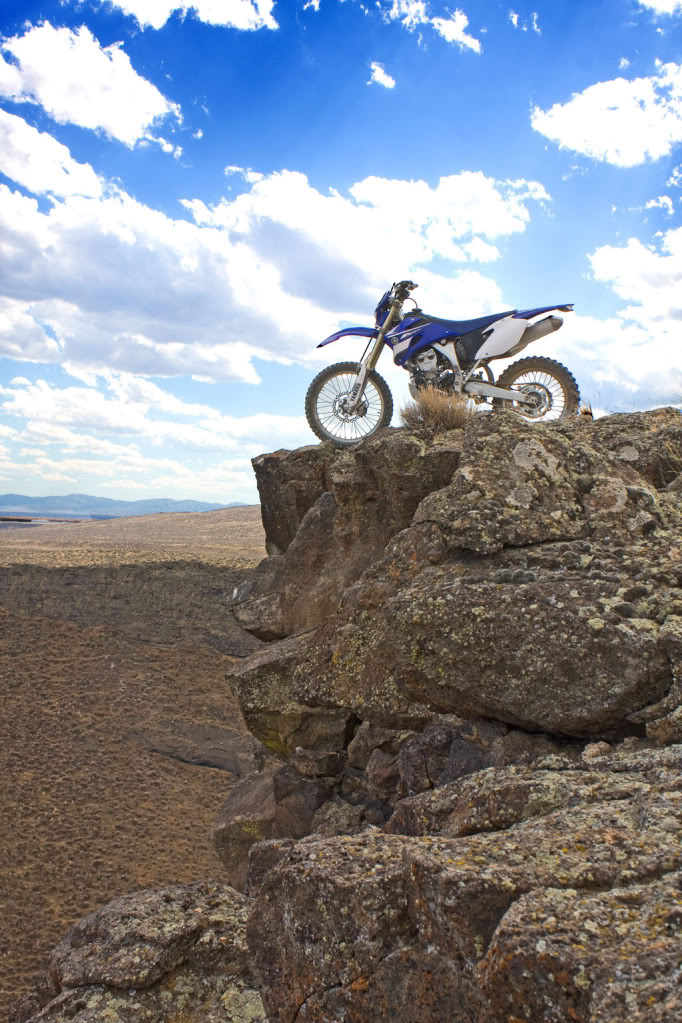 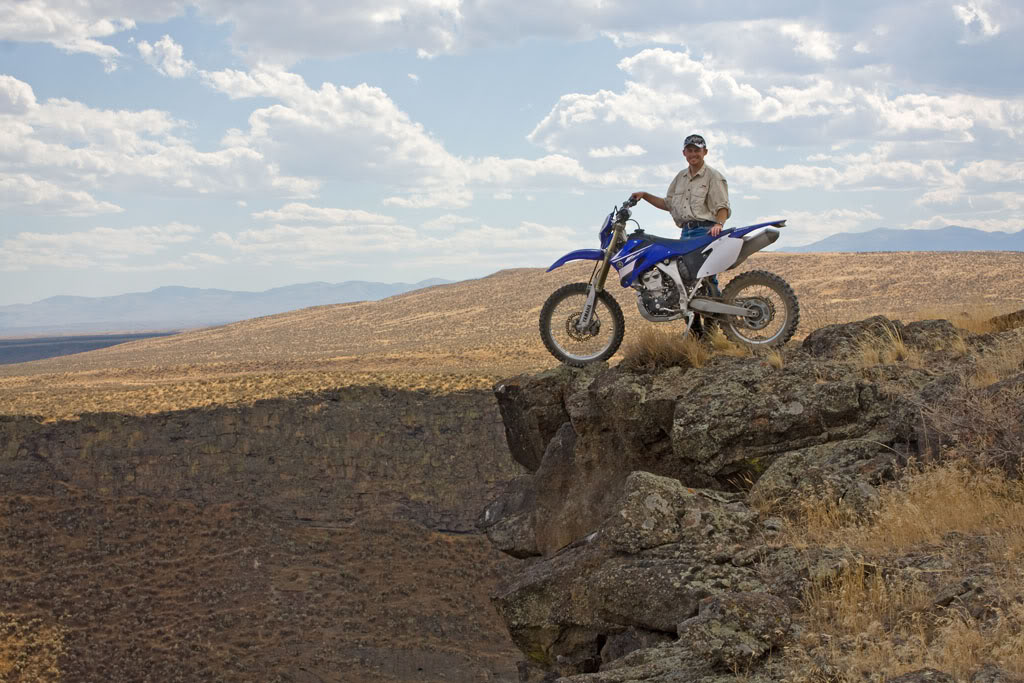 Looking at the world 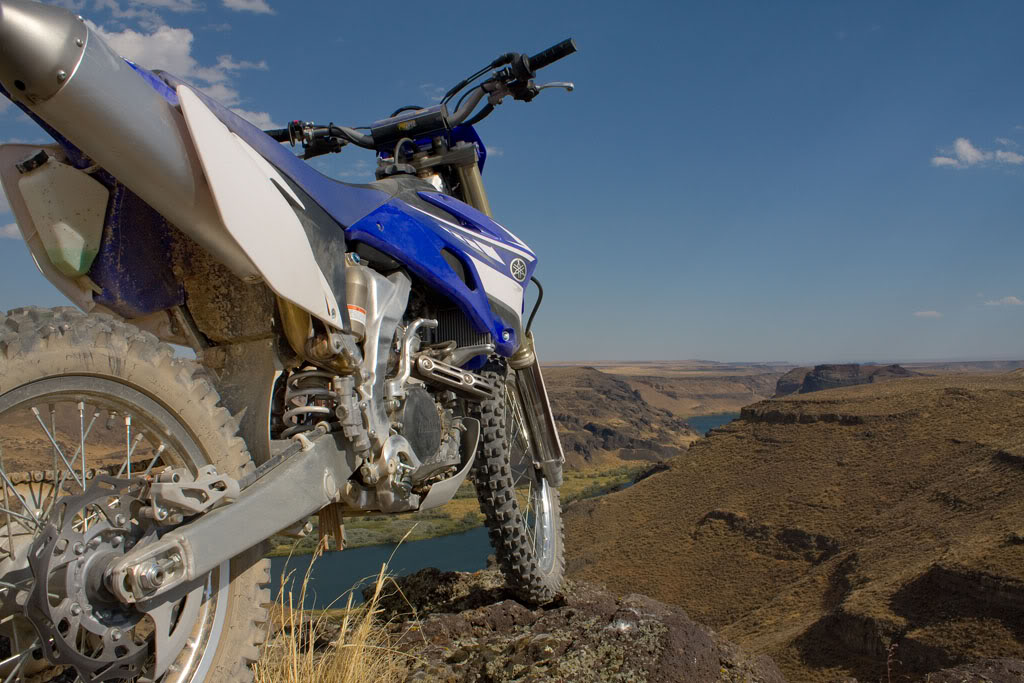 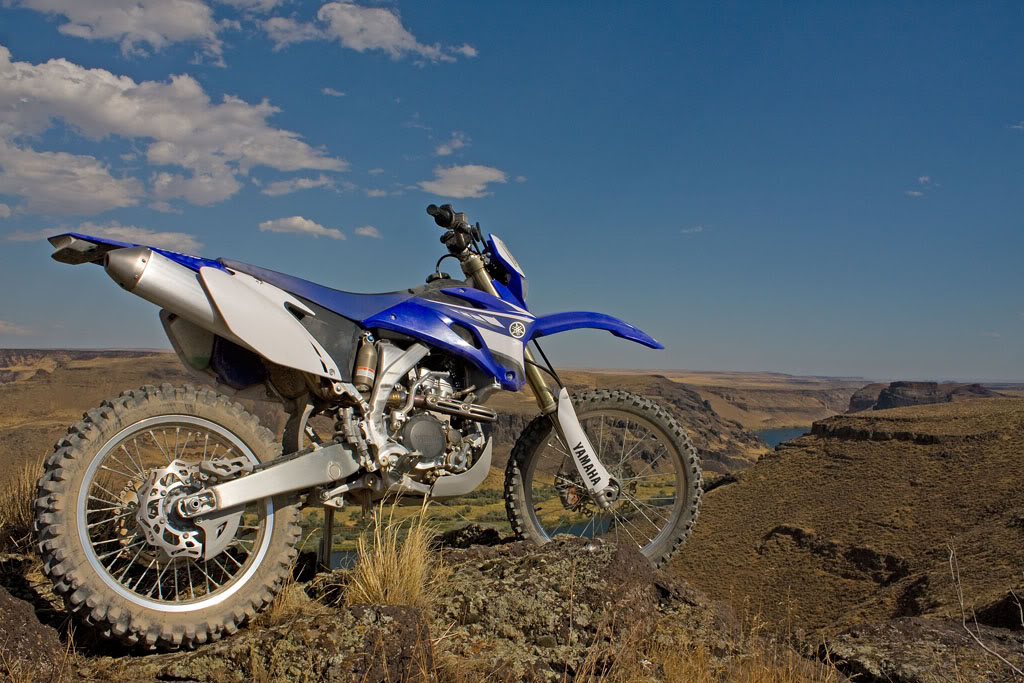 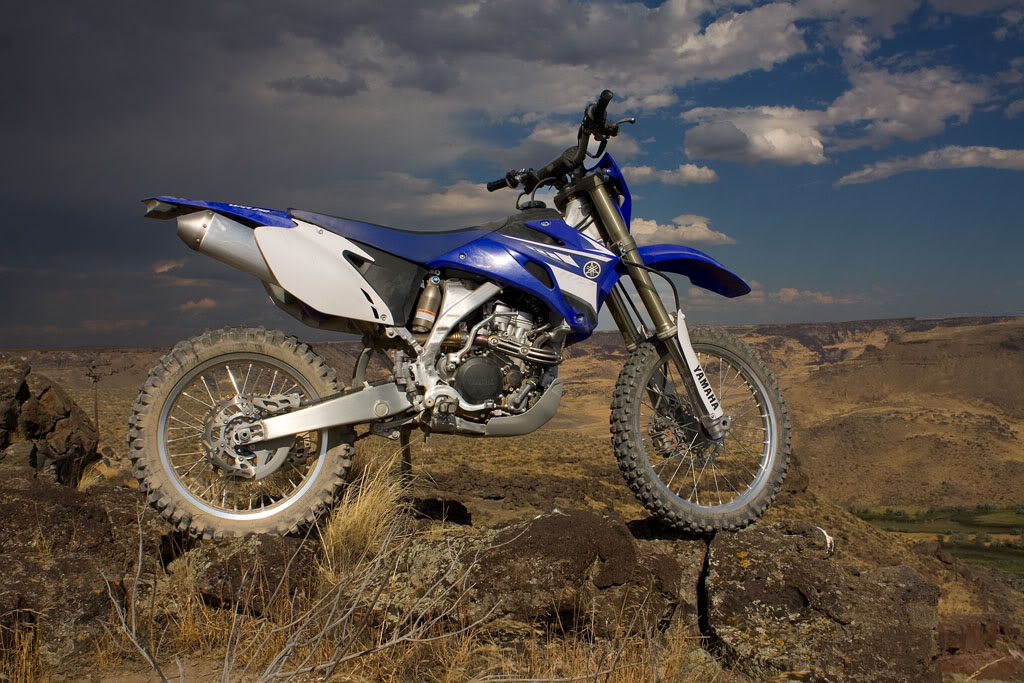 yeah that defiantly wants to make me move there. I keep telling my wife we got to move

jackson409:
yeah that defiantly wants to make me move there. I keep telling my wife we got to move

haha this is less then 20 minutes from my house.

well she goes for two interviews today for teaching jobs and if she don't get either of them I bet she;ll be ready

the pics of the bike on the edge are so awesome.

haha I actually did have a helmet, gloves, and boots. (Don't have the chest protector) I just put the hat on when my helmet is off.

What was that that you had said in the chat, something about cops.

Outstanding pics Bryce - thanks for sharing.