the something something jet is a little rich at this point (main jet?) we ride sea level to 4000 ft.

I can't answer your question but I have a question for you. How tall are you? I'm just wondering about a WR250 for my wife.

Well mine is really easy. 2008 WR 250 STOCK! Oh wait I did put a uni air filter on it. I have ordered some risers for the handle bars. I need to start waking this girl up now that its broke in. Problem is I would have to get off of it long enough to actually work on it and well I just haven't got off of it yet.

Try changing the rear sprocket first as that doesn't make as drastic of a change.

My bike runs SO much better with all the mods

hubby describes it as "running like a raped ape"

I am 5'4 1/2". THe bike was really tall stock, and we shaved the seat pretty good, which helped. I wrote this up to explain my "journey" with the link--
http://plushpuppymx.blogspot.com/2010/02/yamalink-review.html
I got a Yamalink on it though, which made the best difference, it lowered it just a tad more, but it also lowered the center of gravity making it way easier for me to keep the bike from falling over if I stopped wonky(the former more top heaviness of it gave it momentum which was hard for my short legs to stop). Also the lower CG makes it handle better in the tight stuff. The forks are also raised, we ride mostly woods, the bike turns awesome!

I have to say that I definately have to work out(being a short female) to be able to ride this bike well(or um, to not be dumb on it). Not that I force the bike to do stuff, but it really helps in picking it up(and not being wiped out), and frankly everyone who rides needs to wo anyways

Like to quantify at what point the strength made a usuable difference(like picking the bike up on the flat was"easy"), it was when I could deadlift 100# 3x12(which ain't much).

Here's a pic of how my seat is shaved. It's def not soft(it doesn't bother me tho), but it sure is still softer than a KTM board! It doesn't bother me. Also, speaking female-y, it helped to round off the seat a bit on the edges because I'm a little narrower and it made it more comfortable. My hub wants to get a spare stock seat so he can steal my bike (wah! git yer own, baby!) he is 6'. 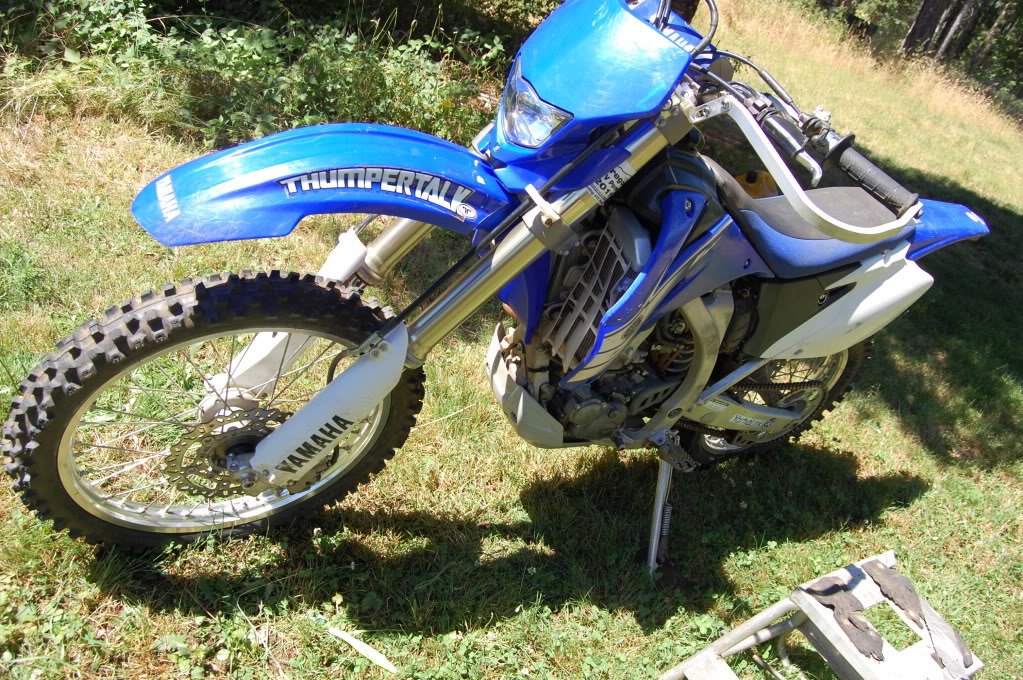 HUb says putting a different cam in it would make it run(power, response) just like a yzf (ha, just repeating what he said

I sure looked like a dork when I first got the bike though, if I couldn't find just the right spot on the trail to stop that I could reach with my foot, I tipped right over

Oh yeah, and the headlight works great for fun relaxed night rides in the dez

Nice bike minus 1 thing.. its got some really bad sticker on the front there.

Sweet. My wife is a little taller then you so with your changes she would be able to get her feet pretty firm on the ground. (Thats a big deal to her also) Now how can I persuade her to keeping my WR250 and I get a WR450. :0)

What is your wife riding now? what year wr would you get her?

Plushpuppy:
What is your wife riding now? what year wr would you get her?
Click to expand...

she will love the wr