MikeinFresno:
Damn!! See Pat, I told you that is the bike we need to get to do this stuff. Lots of parts and bling are made for it too.
Click to expand...


Kinda looks that way doesn't it. Mooney has tricked his out for this trip pretty good. I hope he sends me more pics later tonight.

MikeinFresno:
Damn!! See Pat, I told you that is the bike we need to get to do this stuff. Lots of parts and bling are made for it too.
Click to expand...


That was a bike??? I thought it was a three bedroom bungalow.

Well, I've made it home. Where to start, first I've got to say this was the BEST VACATION/TRIP I have ever done! Started out Saturday morning 0700 down the drive way. First stop was McDonald's in Oakhurst for more coffee. Then off through Yosemite. I've got to say Yosemite is beautiful and all but damn it takes a long time to get to the other side! Finally through and off to Ely Nevada for the first night. Had a really strong cross/head wind most of the day. 20-30 mph I would guess. Made it to Ely about 6 pm and set up camp at the local KOA for the night. Up early for the mandatory stop at McDonald's for coffee, then on the road around 0700 again. 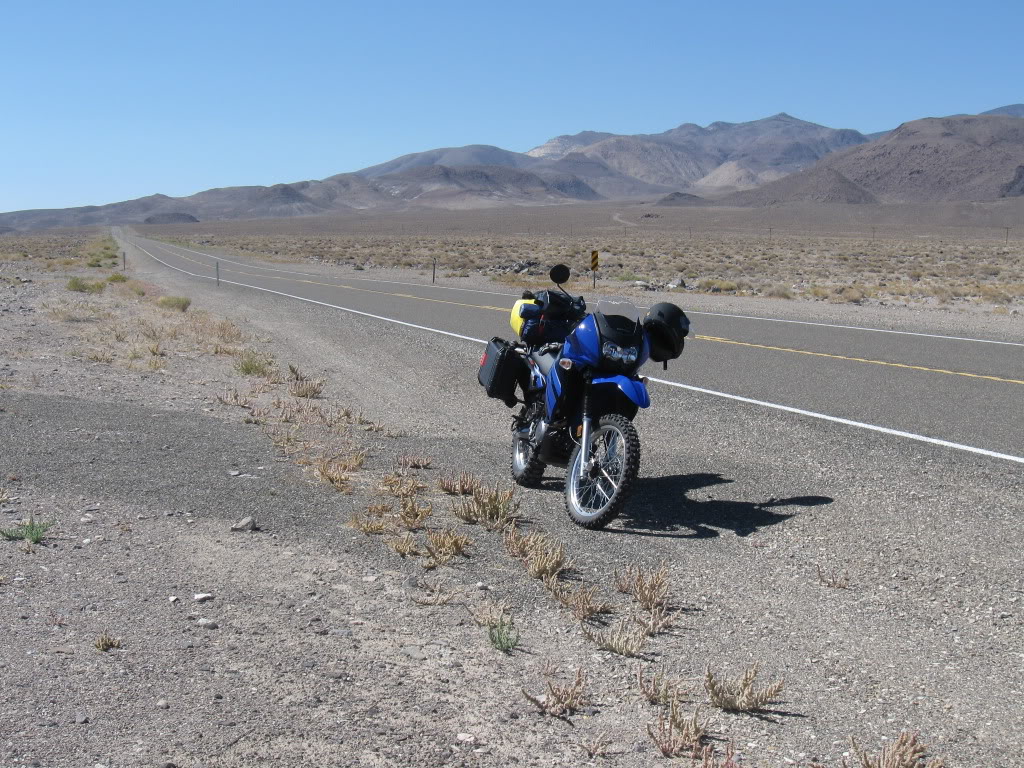 Who ever said these are the loneliest roads in America they were right! I would ride 100 miles or so and get off and stretch my legs. (read rub my ass) Lots of time to think, the miles just kept on and on. 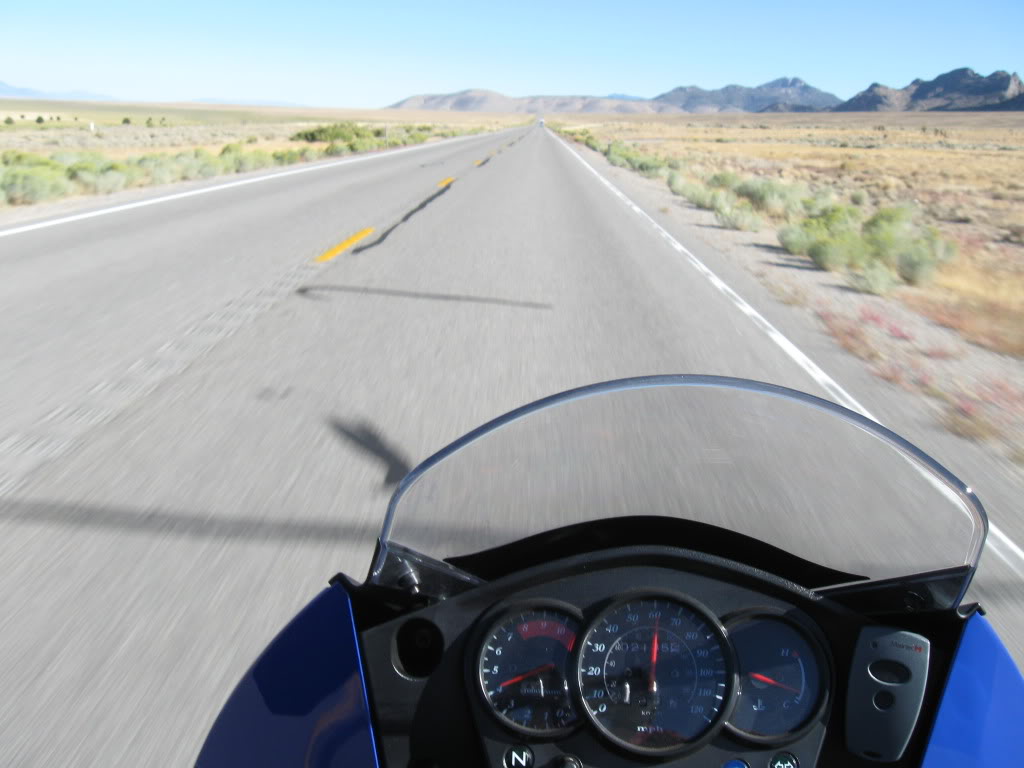 After being diverted for the fires in Utah and having to go about 130 miles out of my way I made it into Moab Sunday evening. Set up camp at the KOA, bought a box of Nutter Butter cookies and two quarts of Gatoraide and called it a day. 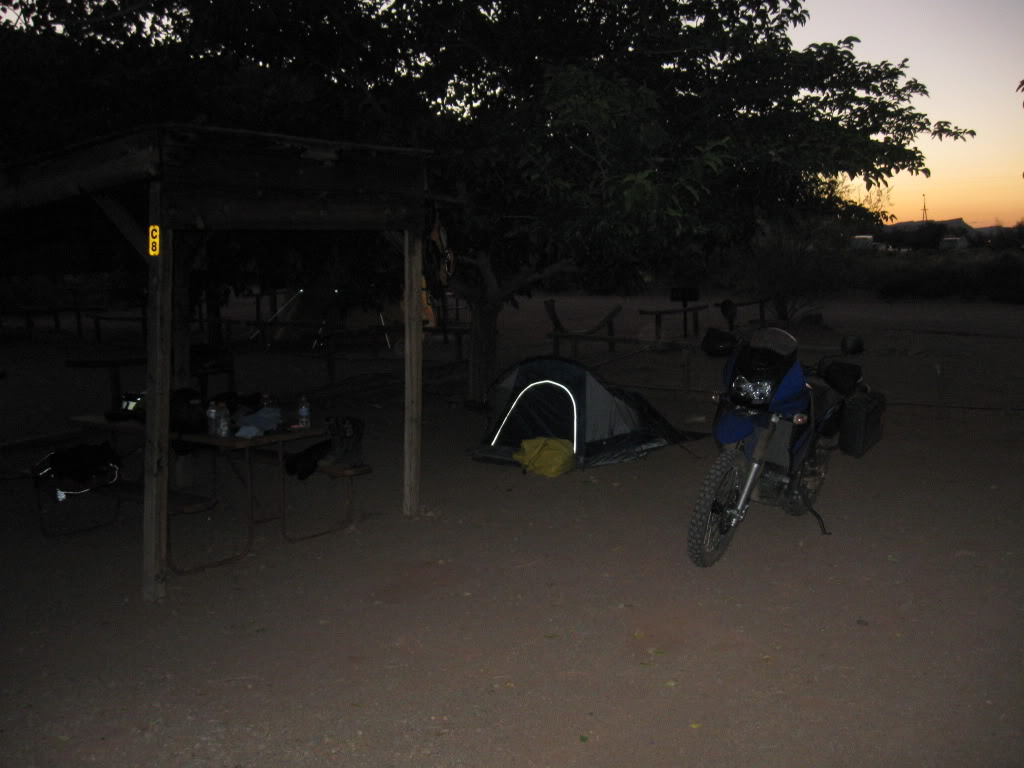 I started out Monday with the intent to scout the area and get a feel for the two areas I wanted to ride. Started out going to Arches national park first as it was the closest. Ended up riding for about 4 hours looking at the paved viewing points of intrest. Ballanced Rock, Petrified Dunes, Devils Garden and the like. All was fabulass! This was really something to see. Pictures and words do not do it justice. After "seeing the usual points of intrest I came across a sign that said "4 wheel drive high clearance vehicles only" seems as though I came to the right place, and off I went! I ended up riding about 50 miles of "maintained" dirt road that seemed to go on for ever. Nothing real challanging but for one spot on the Willow Flats trail out by Marching Men. On the KTM no problem but the KLR required a bit of planning. 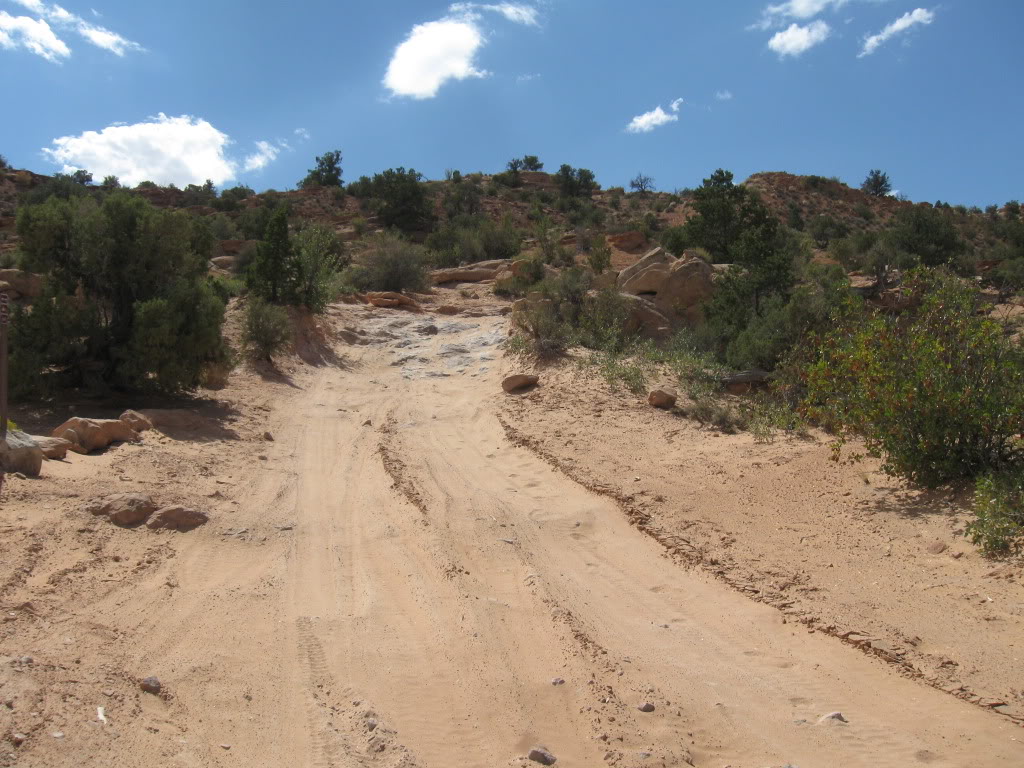 With the exception of a few sand washes pretty much not much of a riding challenge. The scenery was spectacular though and that is what I really came for.
The end of Willow Flats puts you out at hwy 191 just about across to the road entering Canyonlands National Park, home of the White Rim Road. That was the ride that I came there for. I took the remaining part of Monday and scouted the park for the trail head and get the low down on the wash out on White Rim from the park staff. Must say a better group of people you couldn't find anywhere. In particular a Mike Townsend, he was working the entrance booth and gave me a bunch of advice on which places to see and how far back I could go before needing to turn around. He was really great. Actually ran into him on Tuesday out on the trail and chatted again. He was really interested on how it was going and if I was finding all of the places we talked about the day before. Truly a great guy.
So, Tuesday bright and early I headed to Canyonlands for the big ride of the trip. 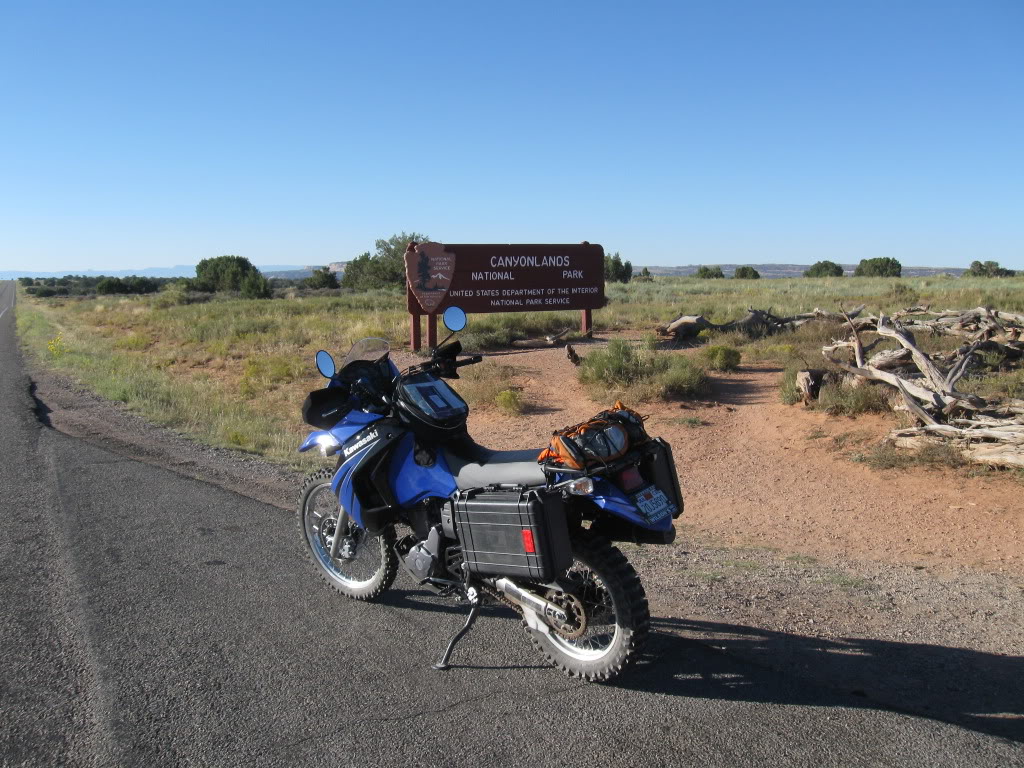 The trail starts off spectacular with the Shafer switchbacks that lead you to the bottom of the mesa. 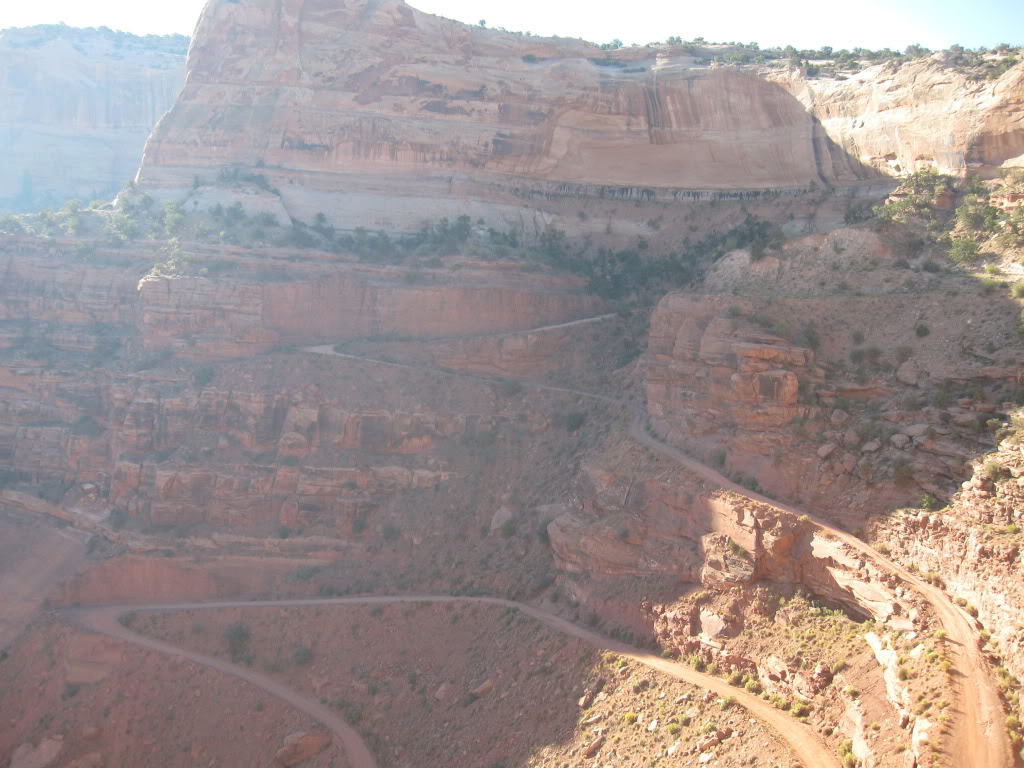 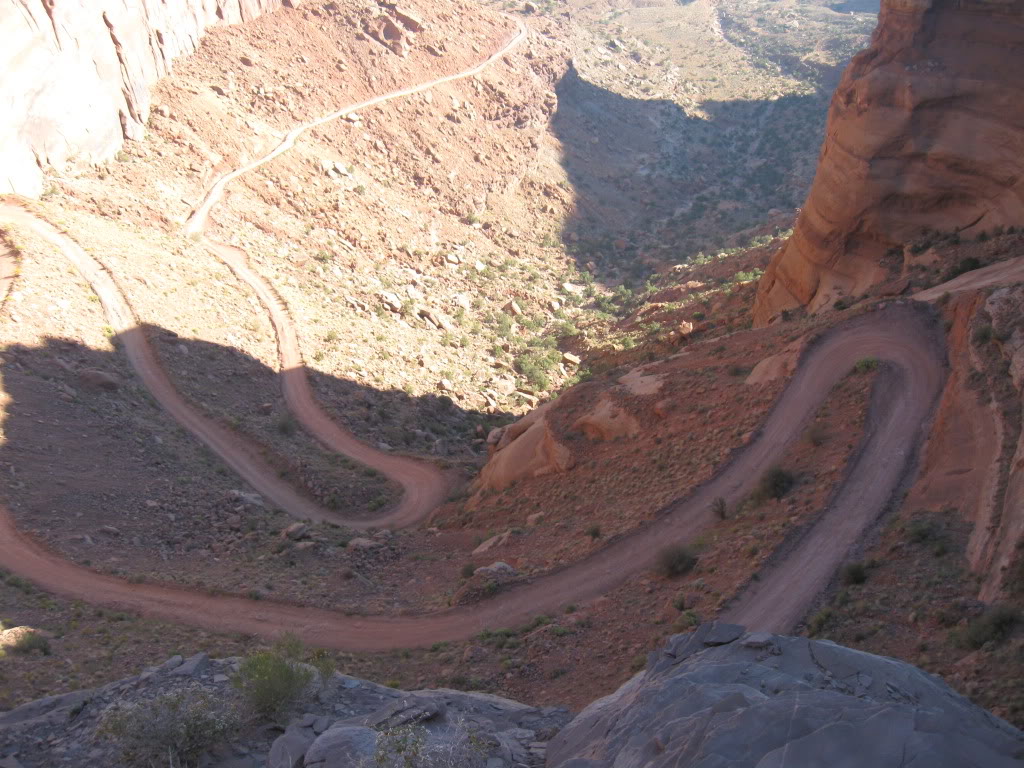 Again the pictures do not do the landscape justice. It is amazing to see.

After reaching the "bottom" you head out hugging the vertical walls of the various mesas,canyons buttes and spires. 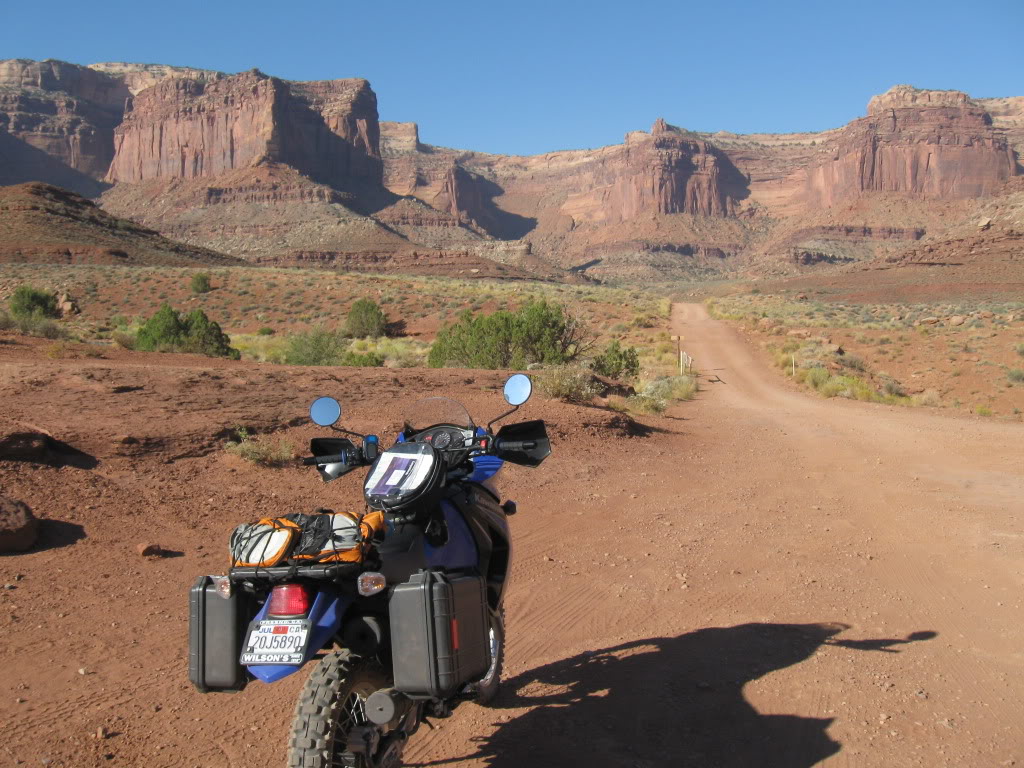 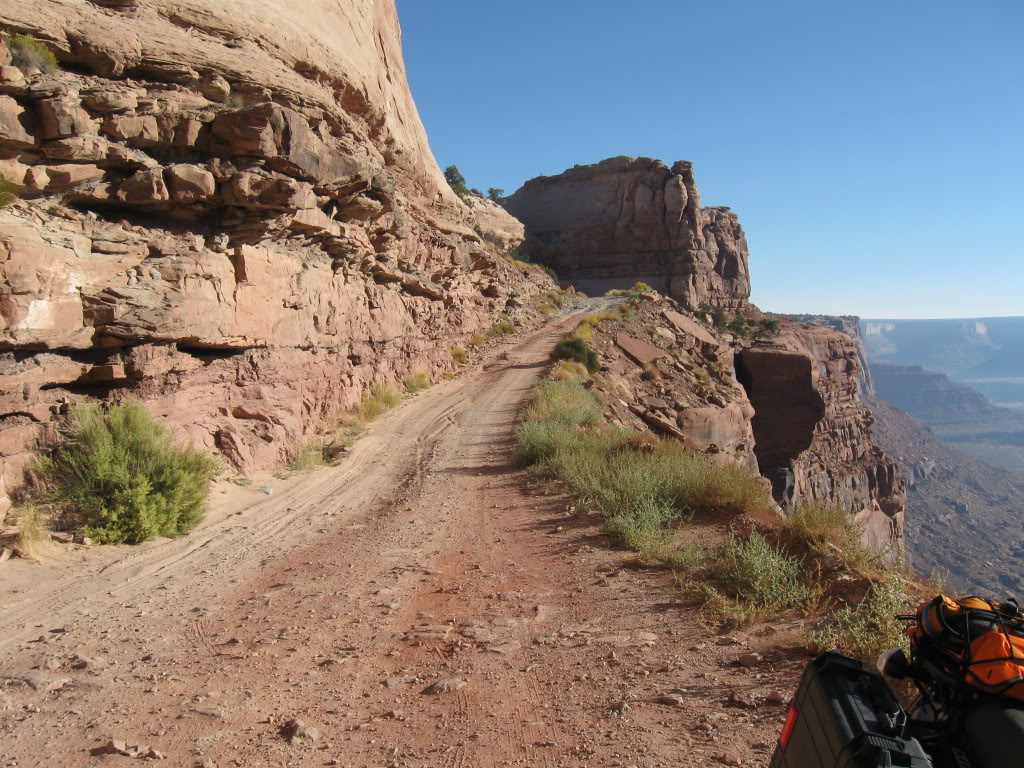 I rode pretty much all of the different "view" areas Mike had spoken to Me about the day before. 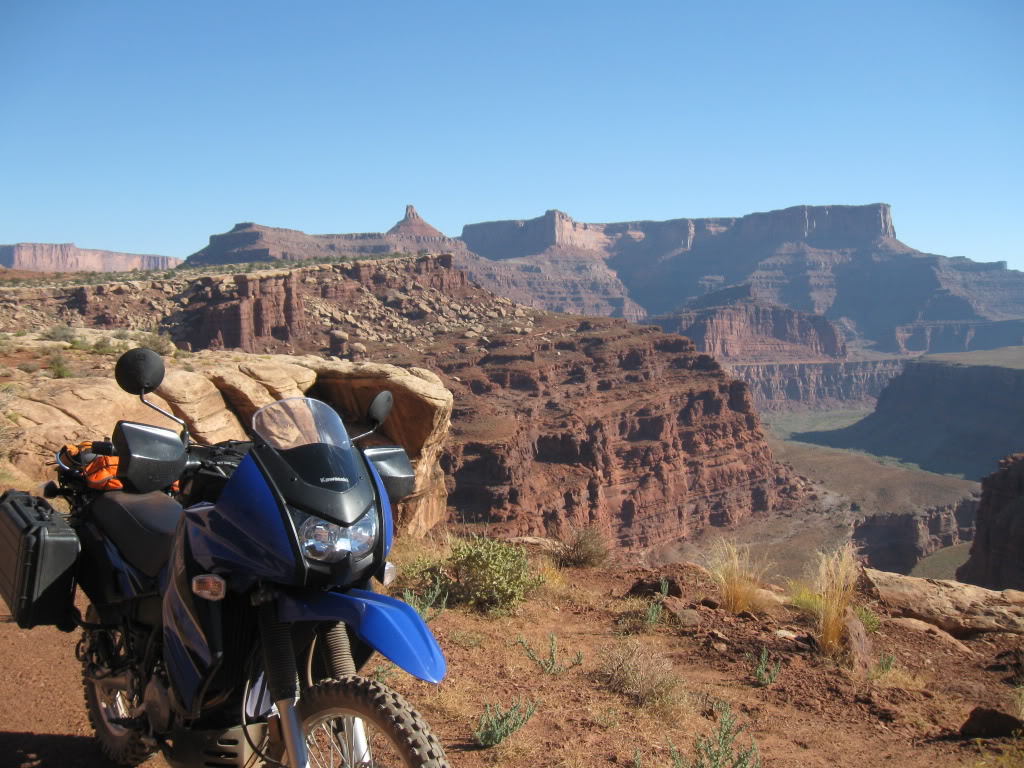 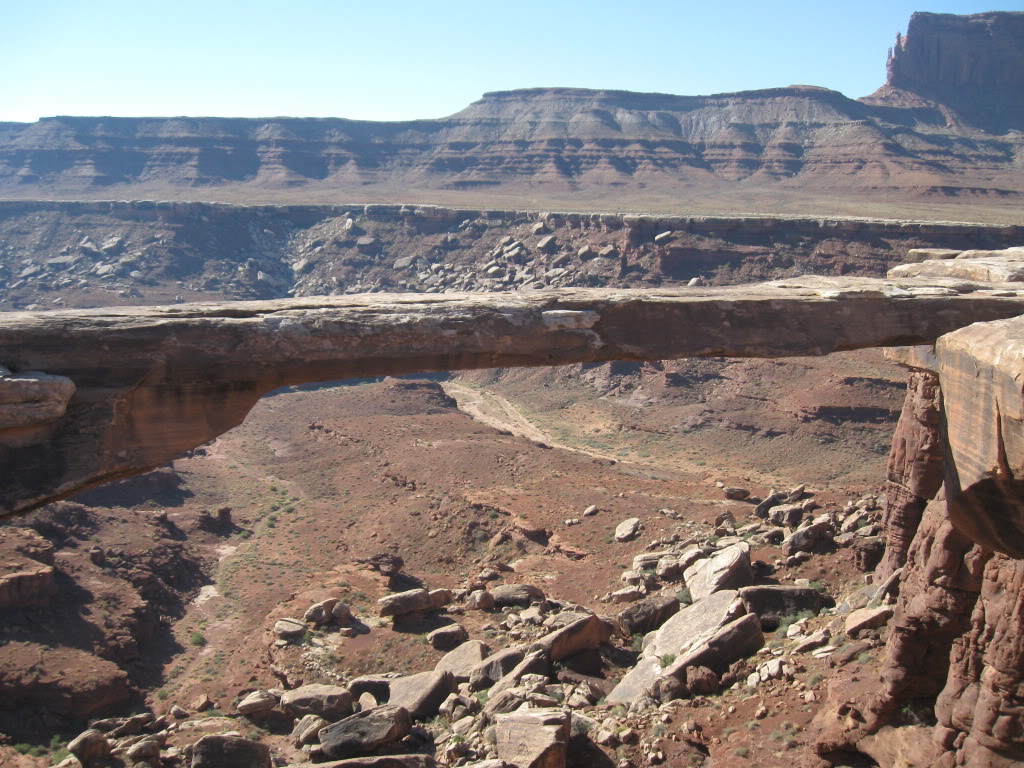 Musselman Arch. Yes you can walk it. It's about 5 feet wide and 30 or 40 feet long. It's also about 200 feet in the air. Following the trail you pass amazing scenery. You totally become "jaded" to it all and concentrate on the ride. Next stop was Lathrop Canyon and a trip down to the Colorado River. BIG mistake, went down about 1/4 mile and was really beginning to think I was not going to be able to get out. Very steep, loose, pot holed trail at about a 40 to 50 percent grade. Problem was, once I was started around the second corner it got steeper with no way to turn around. Short story: I found a spot a few turns later muscled the bike around and was able to try and make the climb out. Remember it is a KLR. It wasn't pretty but I did it with out falling off, or over for that matter. No pictures 'cuz I wasn't about to hike down there for shots of stuff nobody would believe anyway!
Then off to White Crack Overlook 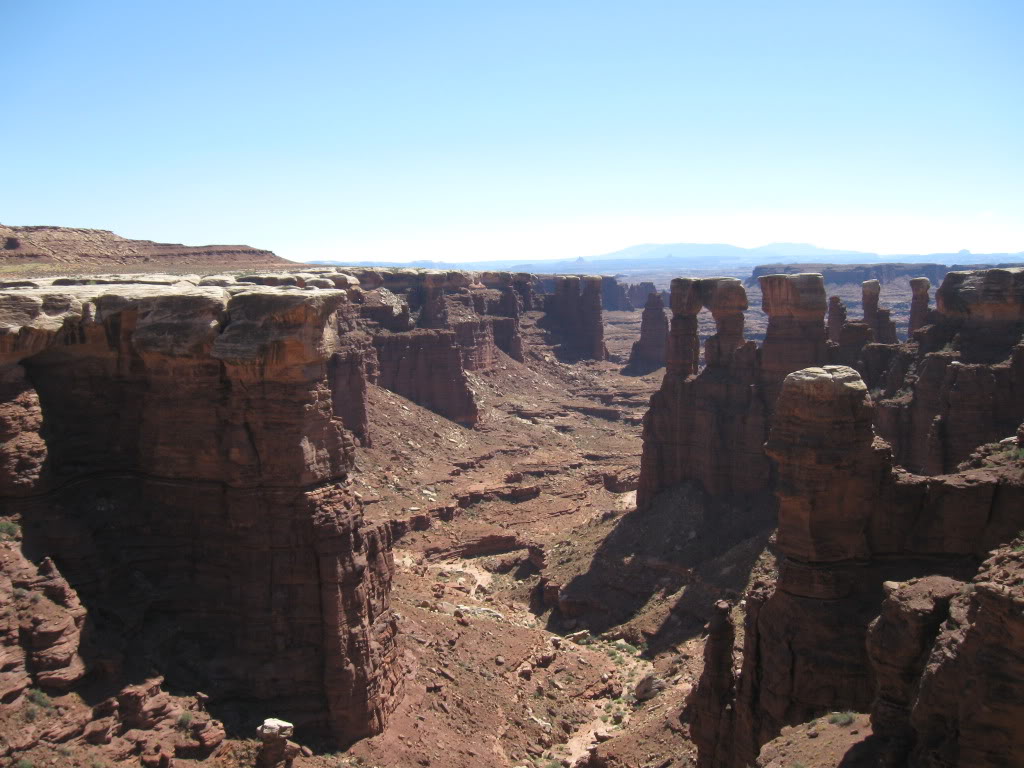 Remember these shots are looking out 40 or 50 miles! 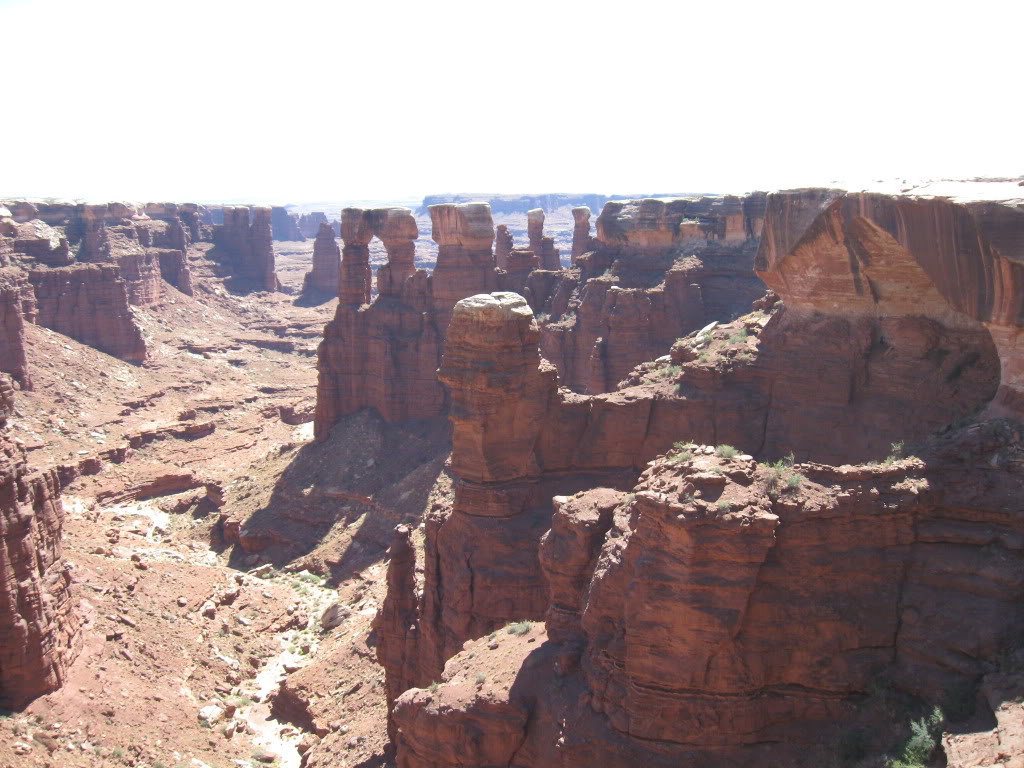 The trail was closed at a place called Potato Bottom. Any farther and I would have had to tun back any way due to lack of fuel. If White Rim had gone all the way through without the "washout" it was only another 40 or so miles. I had filled up just before entering the park and was showing 106 miles on the odometer. Figuring about 20 miles coming in to the trail Head I figured it had been a good start to the day. Definitely the best out and back I had ever been on. 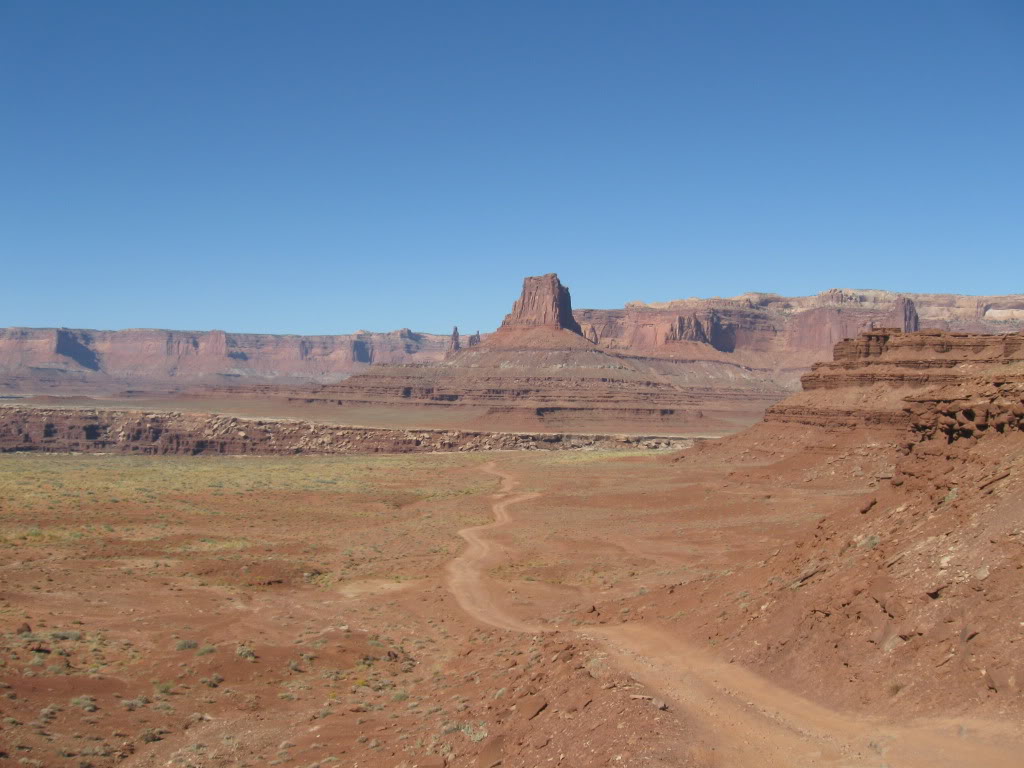 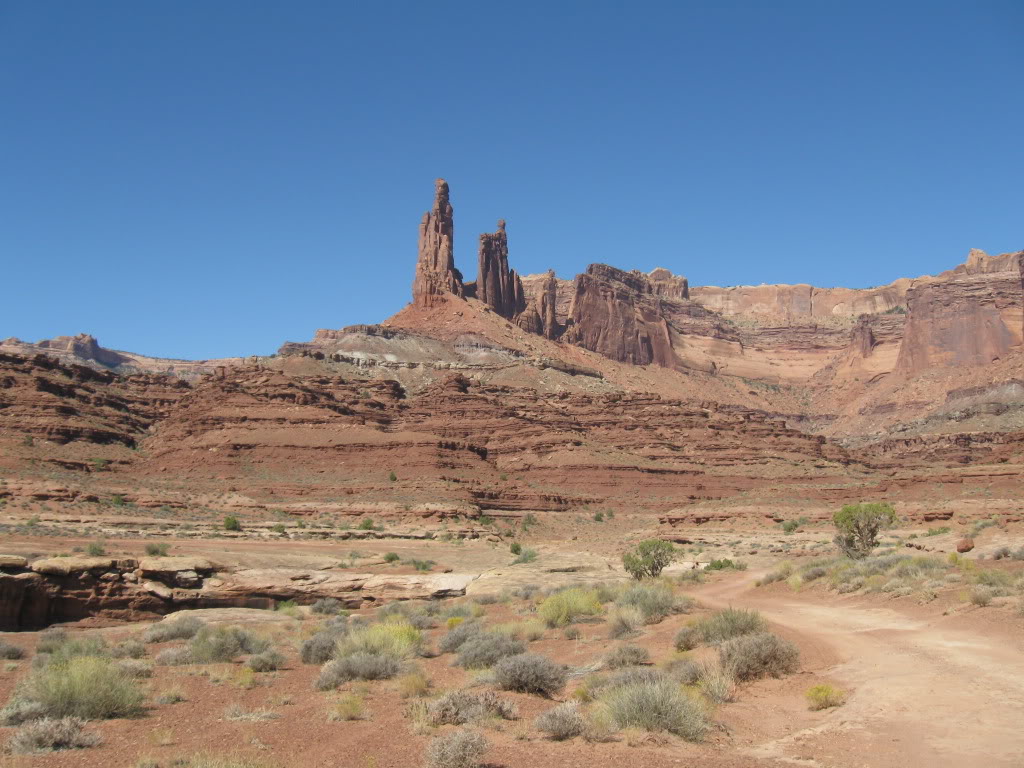 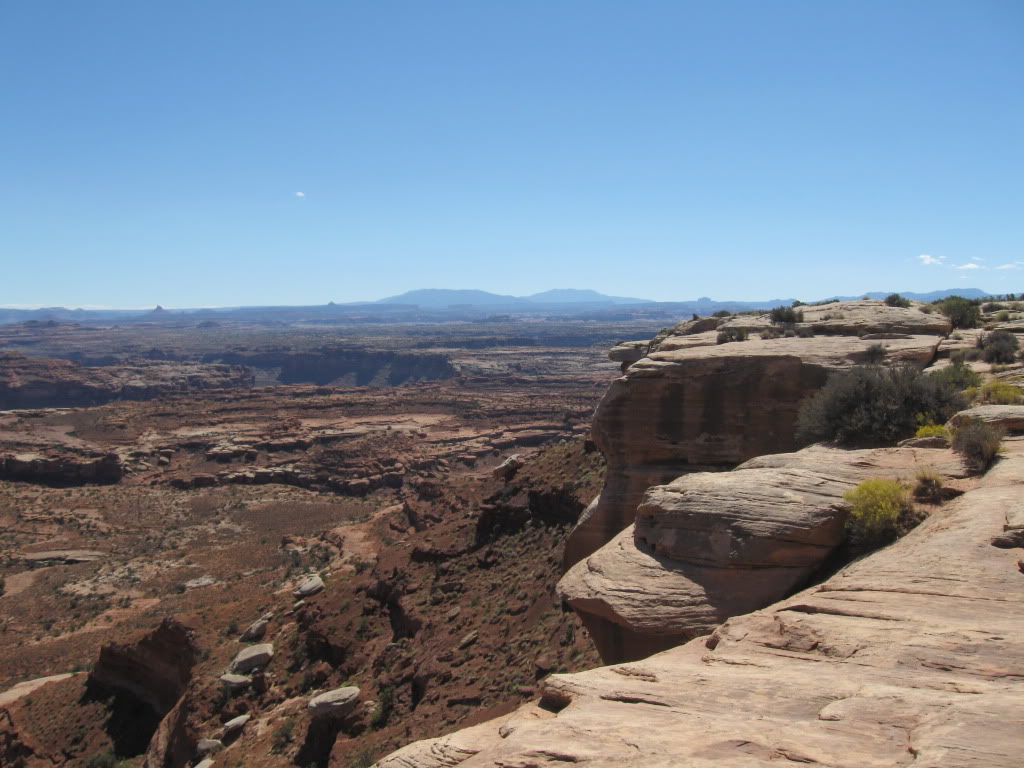 Just before the run up Shafer Switchbacks there is a cutoff called Potash road that takes you below Dead Horse Point. I decided that that was the direction to go as it would put me closer to Moab when I got out. 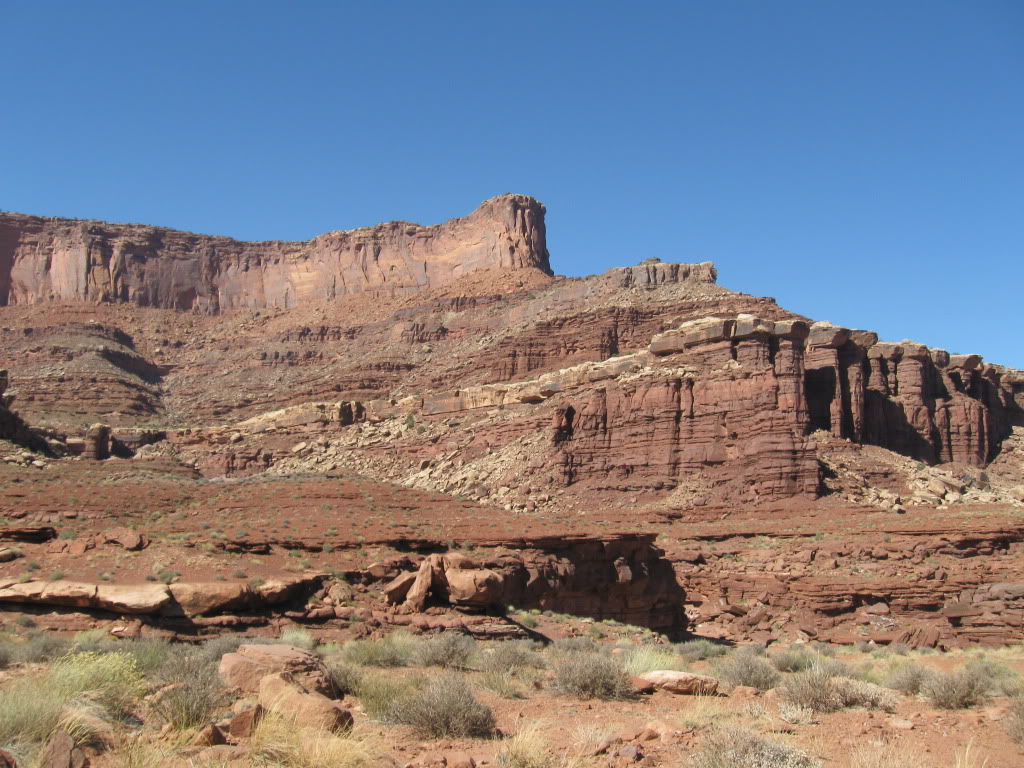 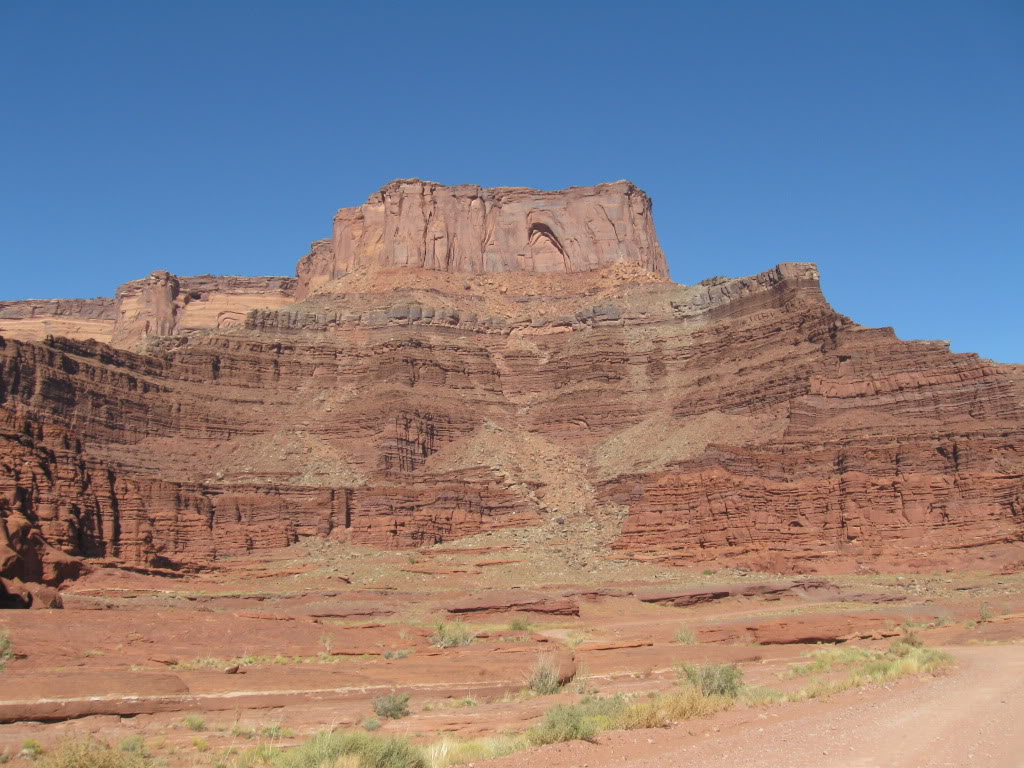 Wednesday morning I was planning on going down to Monument Valley and do the same thing ending up in Beaver Ut after riding Through Zion and Bryce Canyon for the heck of it. However the weather said different. Weather alerts were saying rain fall of 1-3 inches an HOUR starting around 1 pm in the Moab area. The system was heading up from the south which was the direction I was headed. Made about 40 miles before the wind and rain made me think better of my plan. I found the first road heading West and took it. Made it to Beaver earlier than I thought so I continued on into Nevada and points west. Spent the night in Ely again (got to stop somewhere) and took off for California in the morning. 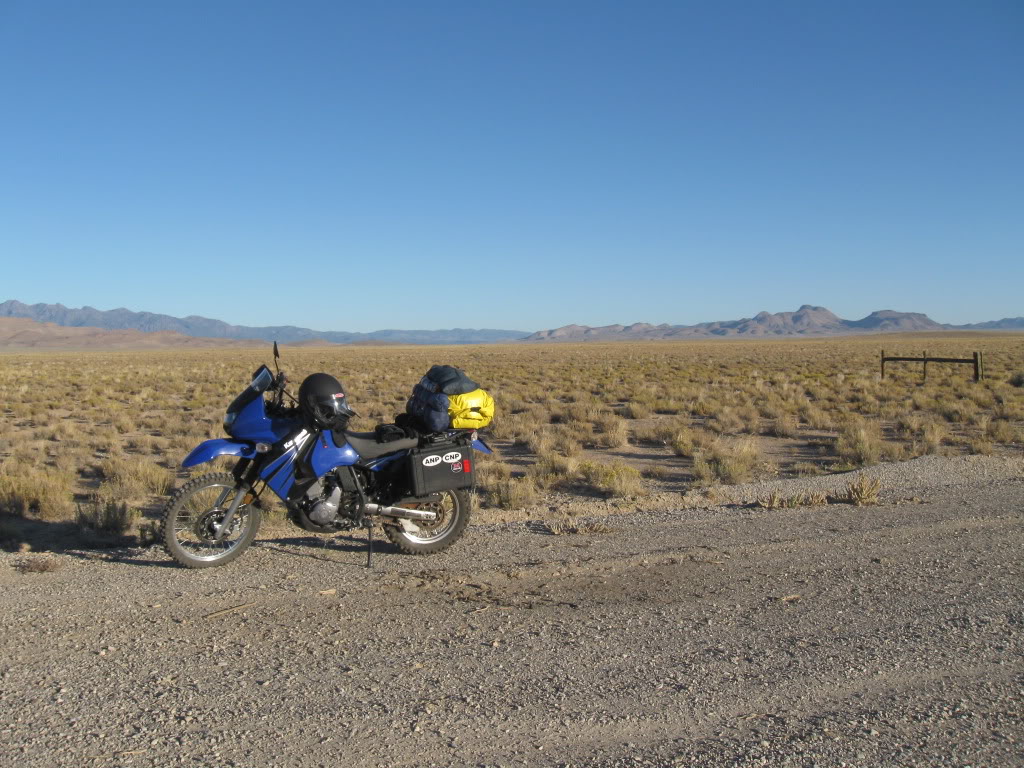 I don't care what anyone says, there is a reason Nevada is a test range. Nice people, but DAMN!
To make up for missing out on the chance to ride Monument Valley I ran up to Bodie for a peek at the ghost town. 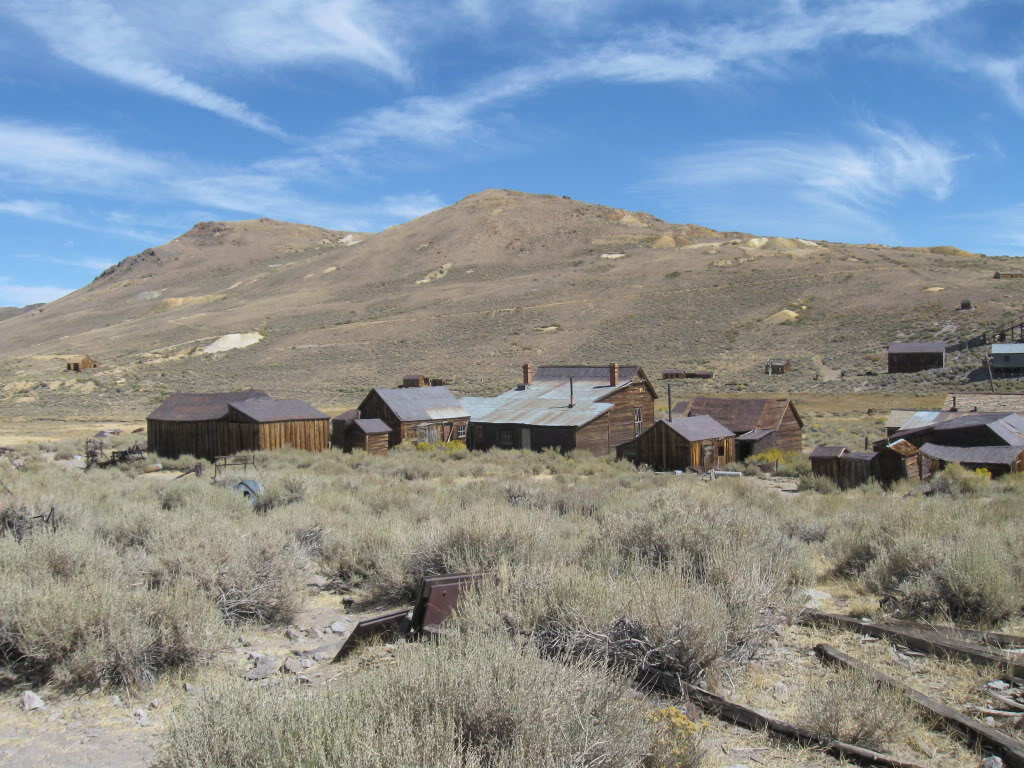 Yep, sure enough it's a ghost town. 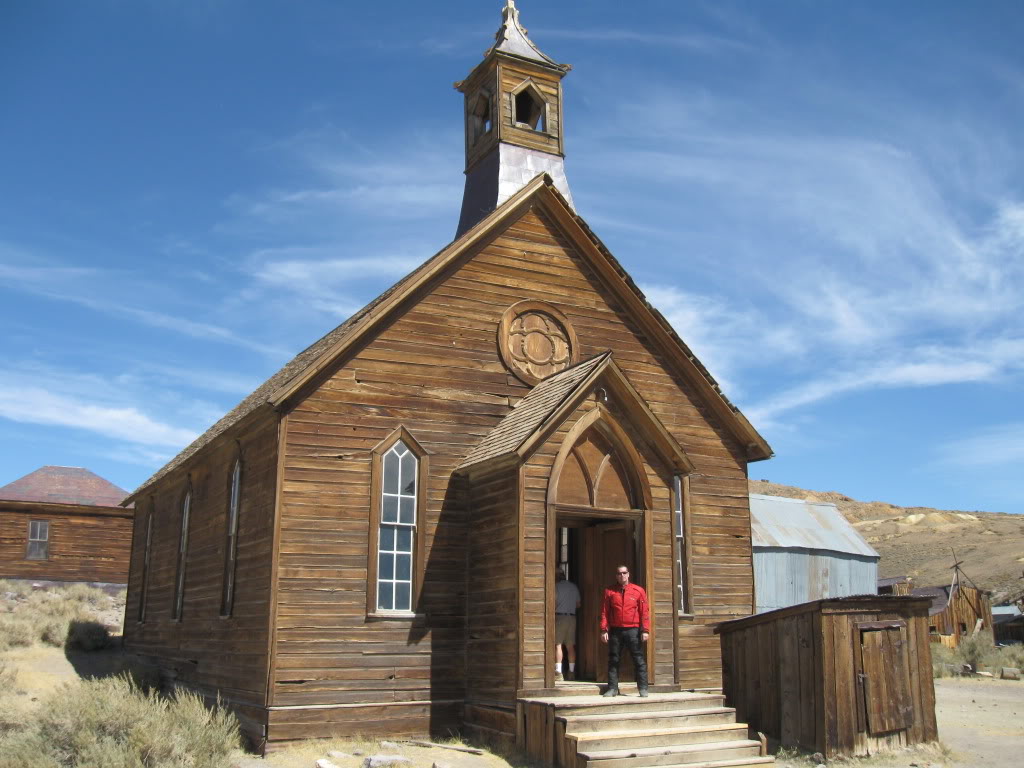 Then BACK through Yosemite 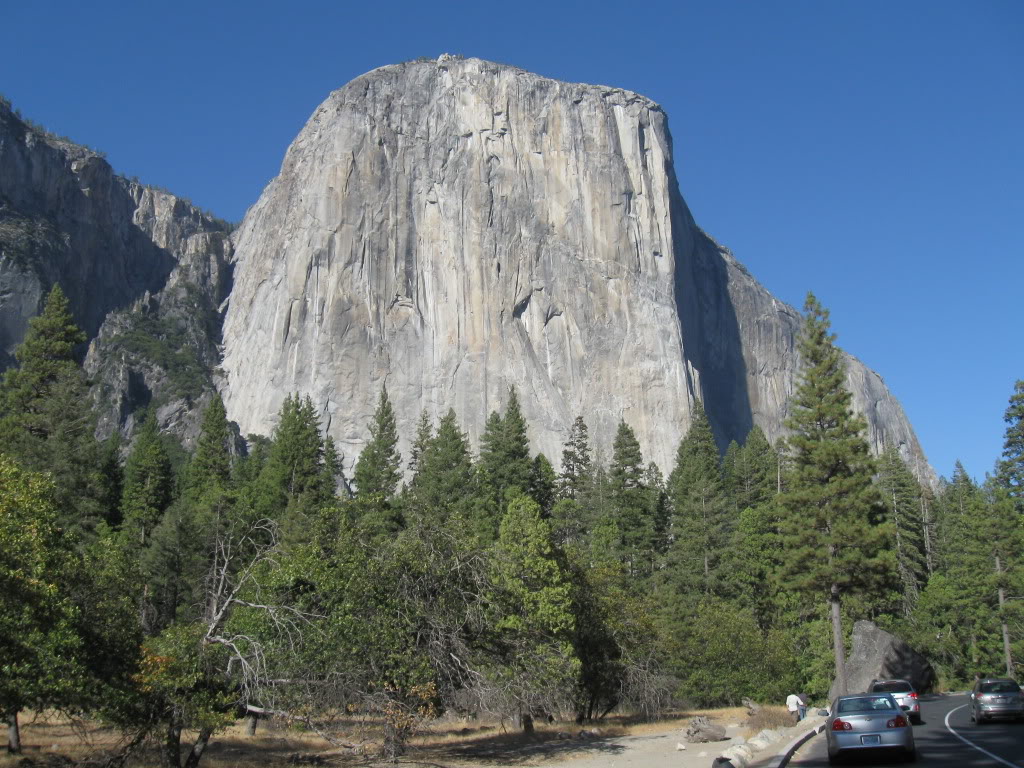 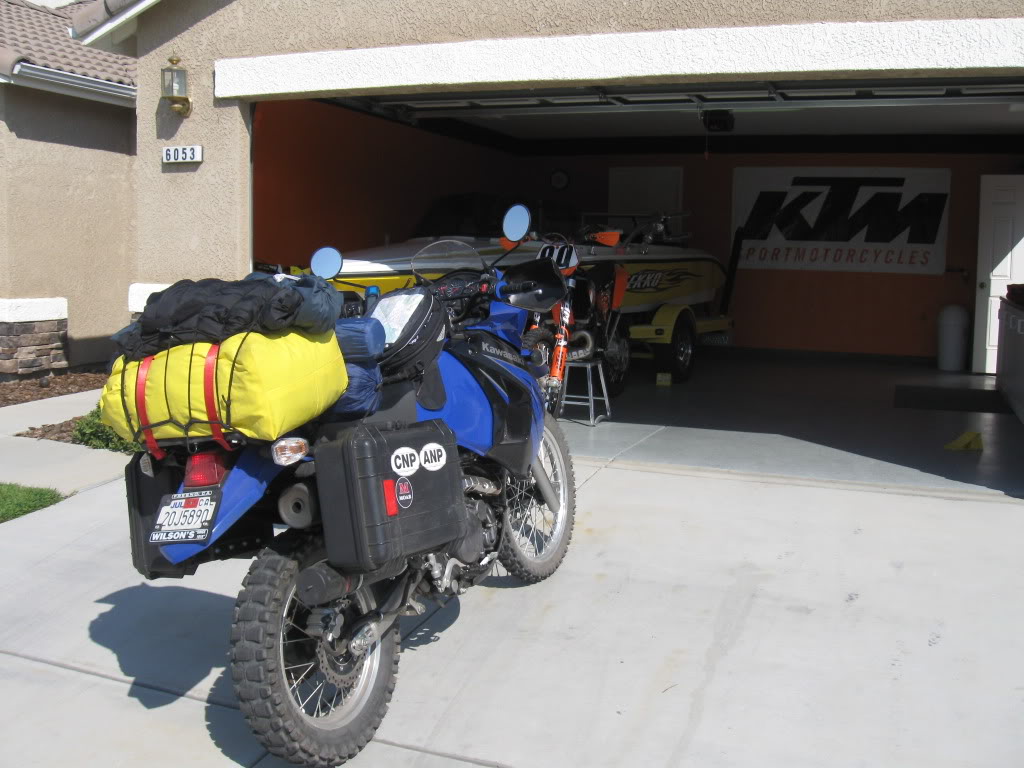 So I started the ride with a new KLR 650 that I had put 1406 miles on. I changed the stock tires for a more aggressive off road capable tire, Pirelli MT21s, added a set of pelican cases for saddle bags, (someone should ask how I did it for 200 bucks) put a dash on for accessory power outlets and switches for heated grips and the like, a $2.19 digital clock so I could watch the seconds go by as I rode through Nevada. (Cross wind both ways thank you very much) A welding rod holder from Home Depot to carry tools and spare tubes. (look under the right pelican case) That was about it. The bike never missed a beat, didn't use a drop of oil and always started right up. It also got 50+ miles to the gallon pretty much all the time.
Total ride? 2468 miles, doorstep to doorstep.
The Pirellis? Yeah, they're done.
As I said in the beginning, I had the best time. I had no time table or real agenda, just desires to see some places I wanted to see. I went where and when I wanted, and that in it's self is a vacation.
I'm begining to think about doing the TAT, or part of it next year, maybe Baja I don't know. I need a few more farkles for the bike, but I really think I have found a new passion in adventure riding.

Man, that is awesome!!! I told the ole lady, one year we need to fly out west and drive back home hitting all the major places like Yosemite, grand canyon, yellow stone and all the others. Great adventures and great pictures, I am truly envious.

WOW nice RR, i think that i am going to have to do a big trip like that some day soon cuz it just looks like to much fun to pass up. great pic's and way to pick up and go