it's so cool to see the progress. Keep up the good work.

Thanks for all the compliments, guys!

I'm done with the decomp mod. Thanks to Larry at kxriders.com for selling me a decomp valve (beautifully reworked, I might add). 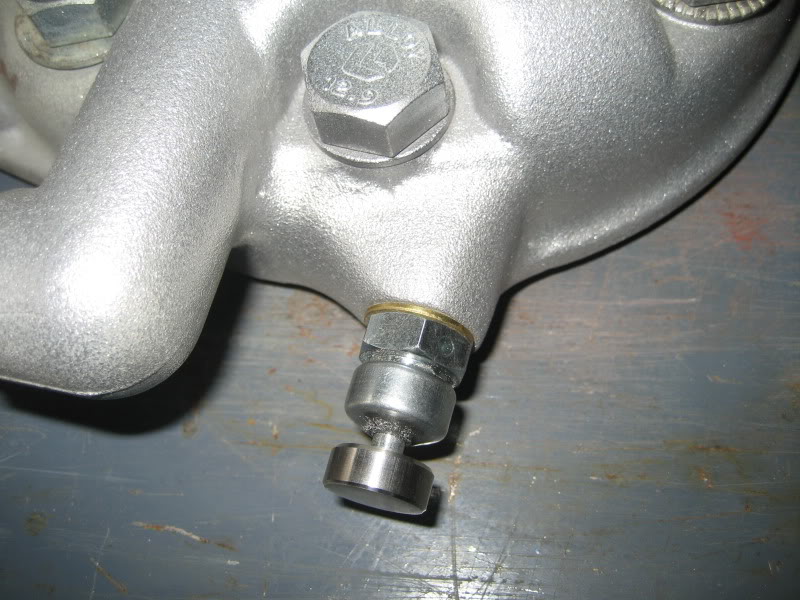 I also found the perfect blast media to match the factory finish. I don't know where to buy it yet, but it is glass bead that is used with traffic paint stripes.

Is that an AUTO Decomp valve??
No lever to hold? Whats the story on that thing ?

Looks great by the way!!

payloan:
Is that an AUTO Decomp valve??
No lever to hold? Whats the story on that thing ?


You just push the button and it resets automatically once the bike fires, pretty trick its going to be one of the first mods I do to my 500. Larry over on kxriders can install these in just about anything, there is another guy that has a lever operated version but I personally like the button better.

HammeredFlat4:
You just push the button and it resets automatically once the bike fires, pretty trick its going to be one of the first mods I do to my 500. Larry over on kxriders can install these in just about anything, there is another guy that has a lever operated version but I personally like the button better.
Click to expand...

cutting torch:
Next up is to make frame stops for the triples.
Click to expand...

The fork swap has been (mostly) completed!

Initially, I thought the triple clamp swap would be straight across from frame to frame, but I was wrong. The headset bearings are the same, and the head tubes were only different by 1/16. Well, race to race was a lot different, so I had to make a .200" spacer to go between the spanner nut and the bearing. I'll need to make a better one later, but this one worked for the mockup and fab of the stops.

You may be shocked by the following photo of how I made the spacer: 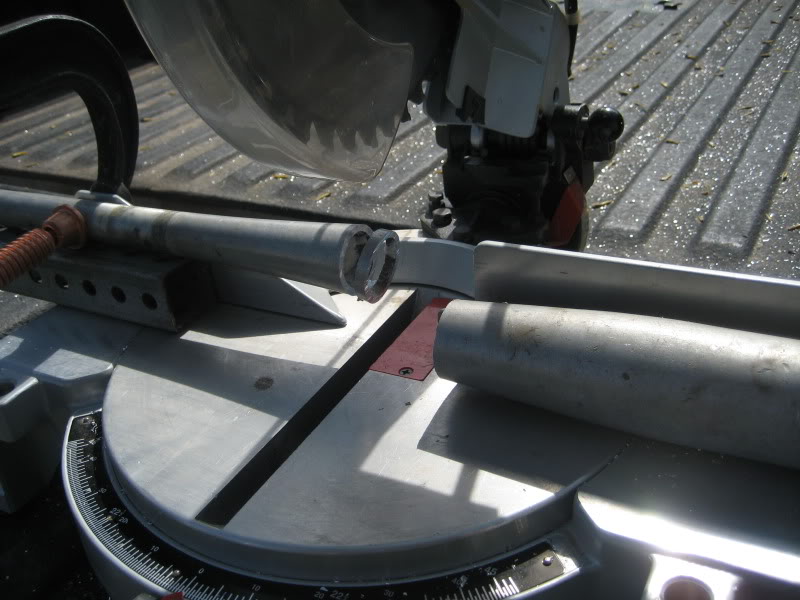 That was a plain old miter saw with a generic carbide contractor's blade. It cuts aluminum quite well. I cut aluminum on my tablesaw as well. I know, I'm nuts! As the pic shows, I did not cut all of the way through the bat to get the spacer I was looking to make. IF you decide to cut AL like this, and you are cutting off a small piece like my spacer, NEVER cut all the way through! If a blade tooth hooks it, it will fly like a bullet! Also, let the blade stop before you bring it back up through the cut.

This is the rough cut spacer: 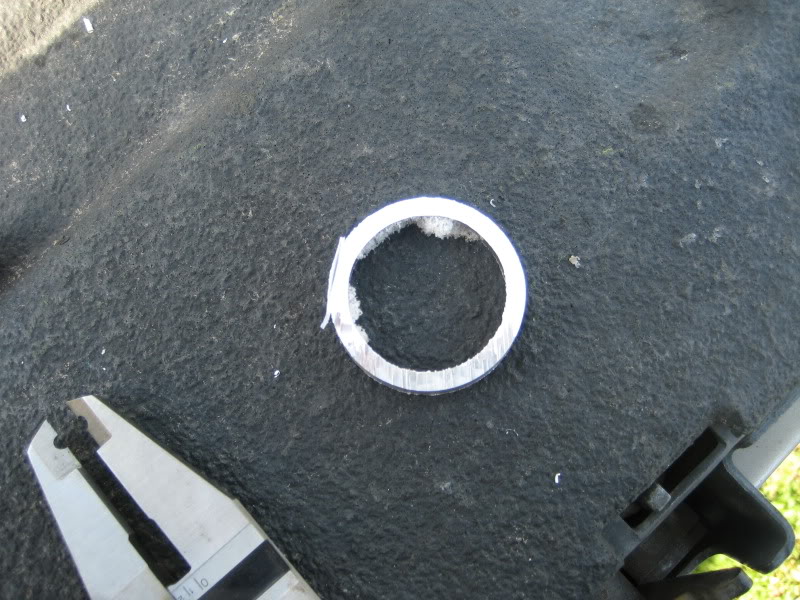 And this is where it went: 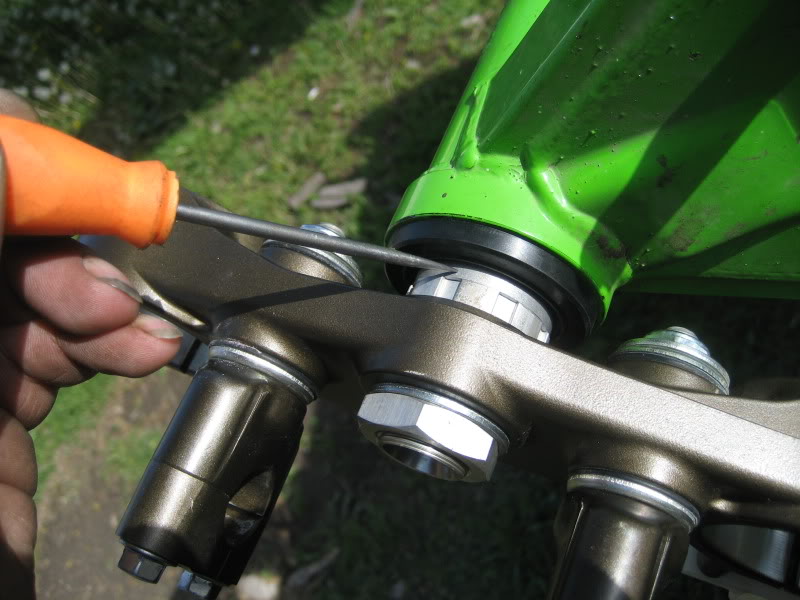 Now that I have covered my insanity with power tools, i'll cover the rest.....

I needed steering stops. The KX250 stop would not work with the KLX450 triples. The 250 stop is the tab on the front, and the 450 uses the frame on the back for stops: 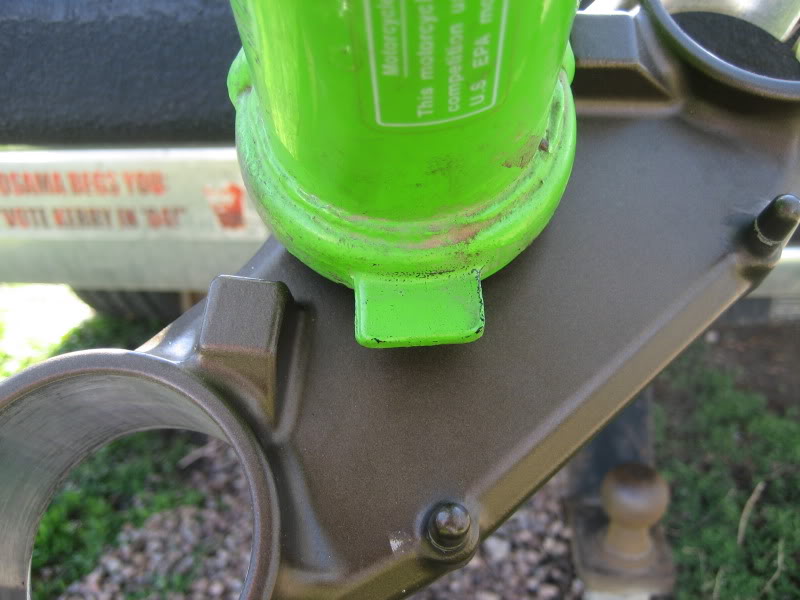 I needed to duplicate the 450 frame to get my stops: 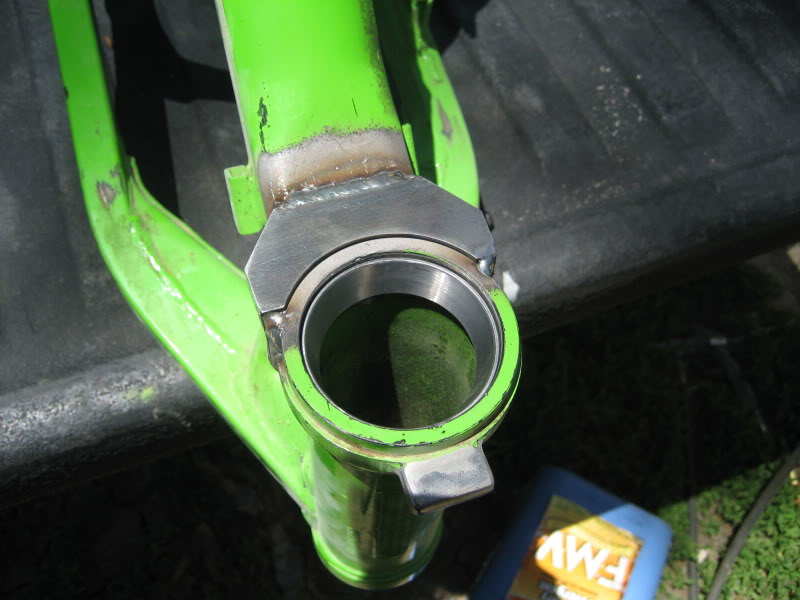 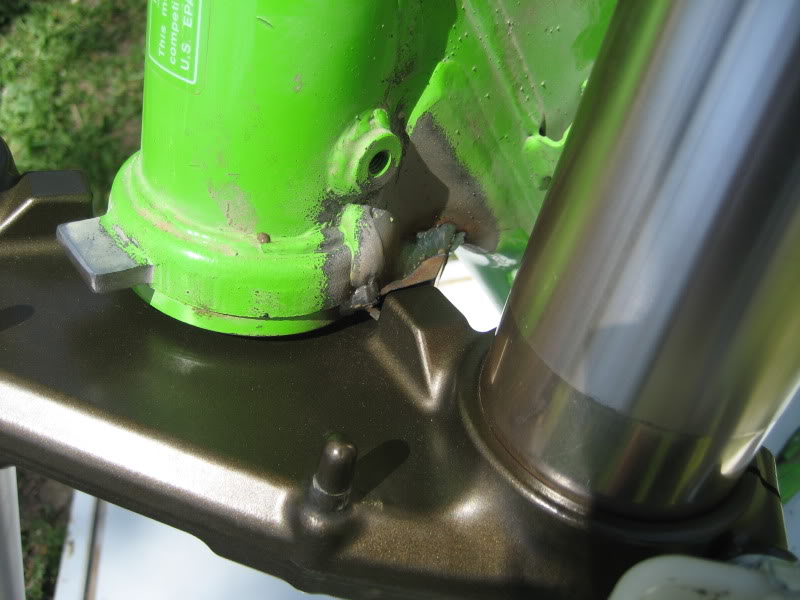 I set the final clearance to match the fork to frame clearance of the stock 250: 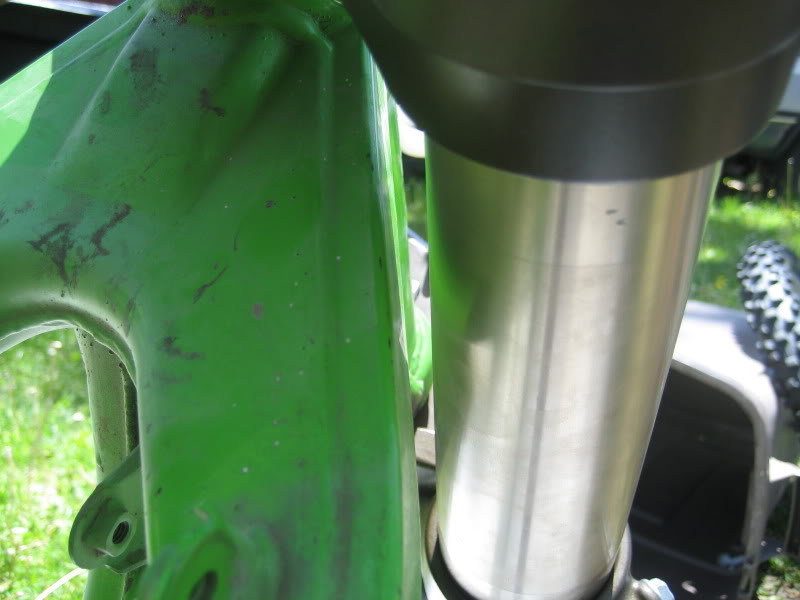 Using the aluminum baseball bat for spacer material is great. Nothing like looking through the junk pile to find something you can modify for a part is way better than spending $ on a new part.
great write up on the conversion, keep the posts and photos coming.

I like how you fabricate everything yourself, instead of going out and buying something.

I like how you fabricate everything yourself, instead of going out and buying something.
Click to expand...

I try to do that, but sometimes it's just worth it to buy a part, such as this headstay that did not work: (It is sitting on top of the front of the head.) 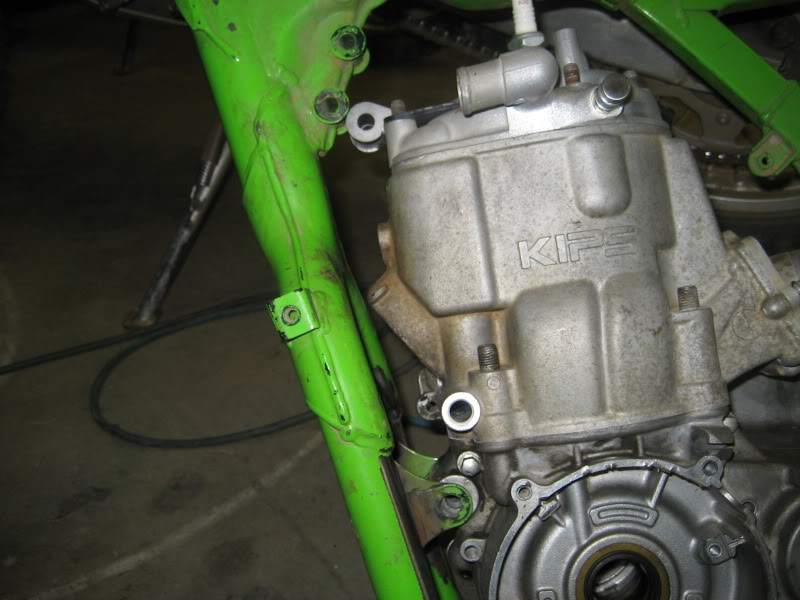 That is a part made by Jfabmotorsports over at kxriders.com. It's a nice part, beautifully made, but it just didn't work for my application. You would think that I was shit out of luck, buyer beware and all. Nope!

Jerry (Jfab) saw my post about how it didn't work for me, and he contacted me right away. We ended up working out a collaborative effort to make a headstay that will work with the KX500 motor in the KX250 chassis. He is going to send me two sets of laser-cut 4130 chromoly parts that are set up to my dimensions, with a little extra material for wiggle room. He is also going to take care of all shipping costs.

I know that some people might think that I am doing R+D for free and getting ripped off. I don't see it that way. My motivation is to get the part I need, and I am getting help from Jerry with the laser cut pieces. Also, I'm not going to go into business to sell this new part, so I might as well share the idea and the possibility of Jerry making it for sale to help out the guys that may need this part, but lack the means to make it.