Installing a mini rectifier to keep fan from draining battery

My fan was draining the battery, so I did some research and found a mod to add a second little rectifier to convert the AC voltage from the stator to dedicated use for the fan. The fan only runs when the engine is on and does not drain the battery now.
Here is what I did to hook up my Auxiliary rectifier with a parts list of what is required:

Remove seat and tank.
I started off by disconnecting the yellow wire quick disconnect under the tank. The wire comes directly from the stator. If you look closely, you can see the spade male connector and spade female connector connected to a yellow wire. 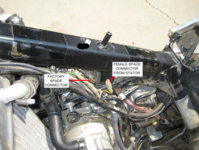 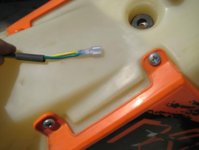 I hooked the splice joint between the existing yellow male and female spade connector. This allows me to return it to stock if required.

Next I cut the wires from the fan white connector where it connects to the original wiring connector. I put heat shrink tubing around the wires for safety. This allows the existing connector to remain untouched. I plugged in the fan connector, but this is optional as the wires are cut.

Now I made a length of ground wire to go from the new rectifier to the ground spot on the frame. I crimped on a ring tongue connector to go under the ground bolt. I used green wire, but brown would have been better as the schematic uses brown wire for all ground wire 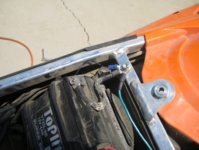 Ziptie the new rectifier out of the way in the airbox and you are done. 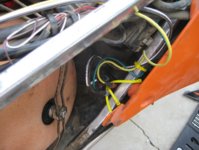