Staff member
As this is my home state just wondering how many more of you DBAer's live around here.

I'm close by Elkhart, IN (Michiana). So far I've only ridden track, but some of these "Addicts" have been pushing me to try some trails, so

I can usually ride Saturday or Sunday and have my own transpo.

Yes I'm close - head North until you can barely see through the Mosquitos - turn left at Bugtussle and your almost there!

Seriously, I'm going to google map it and see how far it is. I'd get a kick out of woods riding with a few of you loogans.

I'm practically your neighbour - only 1,566 Kilometers! Your down near Chicago and south of the big lake.

Naturaledge:
I'm practically your neighbour - only 1,566 Kilometers! Your down near Chicago and south of the big lake.
Click to expand...

Does Northern Michigan/Wisconsin have any good trail systems? (Meet in the middle)

Does Northern Michigan/Wisconsin have any good trail systems? (Meet in the middle)


I'm not sure but I have driven through there and there is some beautifull country - they must have some great trails. Hopefully, someone will chime in.

A Canuck and a Hoosier, meet in the windy city, to check out some trails...

Give me some time, there's a punch line in there somewhere.

timoyz:
Sounds like the begining of a good joke...

A Canuck and a Hoosier, meet in the windy city, to check out some trails...

Give me some time, there's a punch line in there somewhere.

"So the Canuck says, "Wow, I never realized the City was this big!" The Hoosier replies, "Wait until you see Chicago, we're still in Gary Indiana"

Southeast Ohio: My buddies thought it was too hot to ride this weekend, and went to the Casino. I stayed at the cabin and decided to go riding! I spent 2 days Boone'ing trails and going farther than I ever had before. Not a smart idea by yourself, as a bad wreck would leave you as coyote bait...you'd never be found for ??? But I took it real easy, no big hill climbs, no big speed. Met 4 other guys on the trail and they showed me what must be 5 times more trails than I had known, and the connectors to get to them from trails I do know! There was some epic riding! Found 2 decent tracks as well! Did 115 miles this weekend which is a TON in the area I ride! Left my camera at home, dammit! I will go back and get some pics as it would make a good ride report!

So what can of land is this that you ride on?

And YOU need a helmet cam as well! Who do you think you are calling Buck out like that

So what can of land is this that you ride on?
Click to expand...

KTMRack:
And YOU need a helmet cam as well! Who do you think you are calling Buck out like that

Hey, go back to your West forum.

I'm getting my cuz's still camera for Red Bud so I'll be sure to take it to the track when I ride, before I take it back that is.

But I have been thinking about getting a GoPro for MX and Snowboarding, but there's more important things I need right now.

James:
Hey, go back to your West forum.

I'm getting my cuz's still camera for Red Bud so I'll be sure to take it to the track when I ride, before I take it back that is.

But I have been thinking about getting a GoPro for MX and Snowboarding, but there's more important things I need right now.

what's the matter, DBA taking up a little time these days

what's the matter, DBA taking up a little time these days

damn you hit that on the head, it's getting better though. Well sort of.

Don't worrie go ride take a trip take your time me and rack will watch the place for ya.

So what can of land is this that you ride on?
Click to expand...


I have an old Oregon Scientific ATK2000 helmet cam somewhere if I can find it...its kind of crappy on sound and video is 480VGA at 30FPS so the pics look like a bad acid trip. I'll see if I can dig it up.

The land around here? Well, its all man-made. Virtually ALL of it was or is being surfaced mined for coal. With few exceptions, every hill, valley, lake, stream was made by the biggest earth moving machines ever made.

This machine in its lifetime moved TWICE the amount of material moved to make the Panama Canal.

Watch this vid. That "little" bulldozer you see is a monster D11 with a 10ft high x 20ft long blade. They have 20 of these working 24/7. The Spade is 20 stories high and can tear down a mountain and build it again. http://www.youtube.com/watch?v=l6ZQR5YfZdQ&feature=related

A birds eye view of the devastation this machine does: http://www.youtube.com/watch?v=6l2c-aQm0ak&feature=related
Because of the mining, this part of Ohio is one of the least inhabited places. Its reclaimed, but now VAST tracts of land look like the giant prairies in the Dakotas. The digging face of the machine is called the "high wall" and the place it dumps what it digs is called the "spoil bank". Two important terms you want to know if you want to stay alive riding down here. The high walls are 100 to 200foot cliffs. At their base is always a lake, and the spoil bank is a rounded hill that makes for some kick ass hill climbs.

Here is where the Spade died less than a mile from my cabin: Watch this because it goes with pics that follow http://www.youtube.com/watch?v=iEzdZa-qm4U

We climbed all over the Spade during the 6 months it took to cut it up. 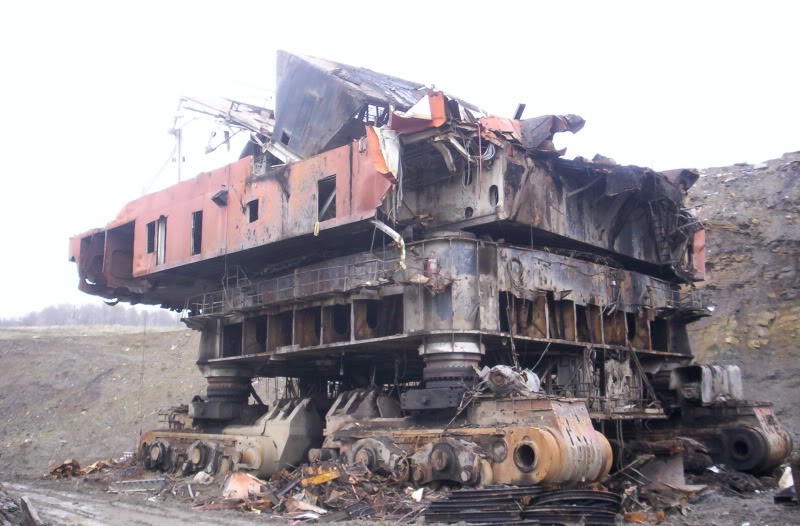 My buddies on the boom of the Spade after they blew it up. Bubble Boy in the plastic is actually from SoCal and was up visiting. He takes me on desert rides to all the places these guys here are posting about! 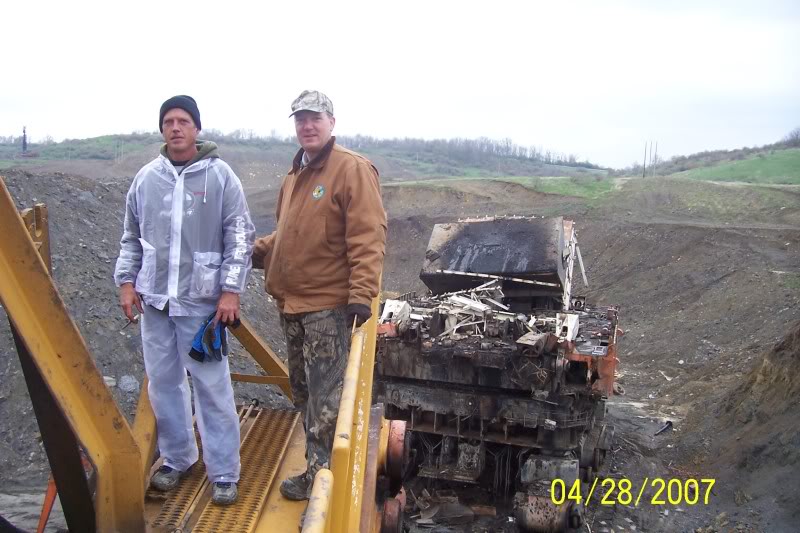 Me on the back of the Spade 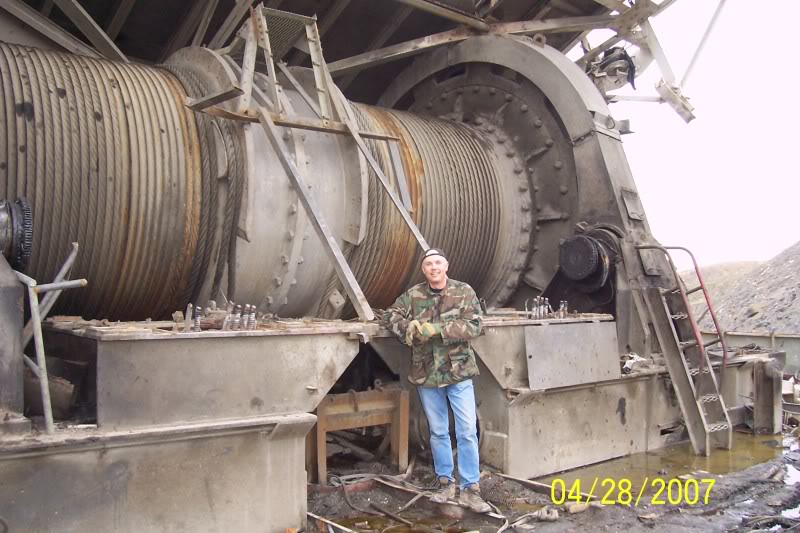 Here is exactly where the Spade sat when it was cut up. This hill in front of me is where I whacked my 22 lb turkey just 3 years after it was a moonscape. It's now overrun with wildlife: 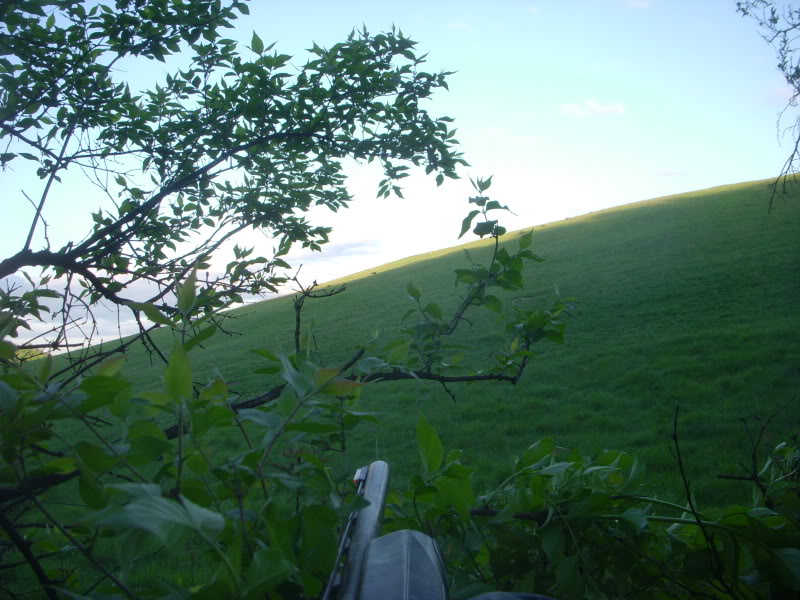 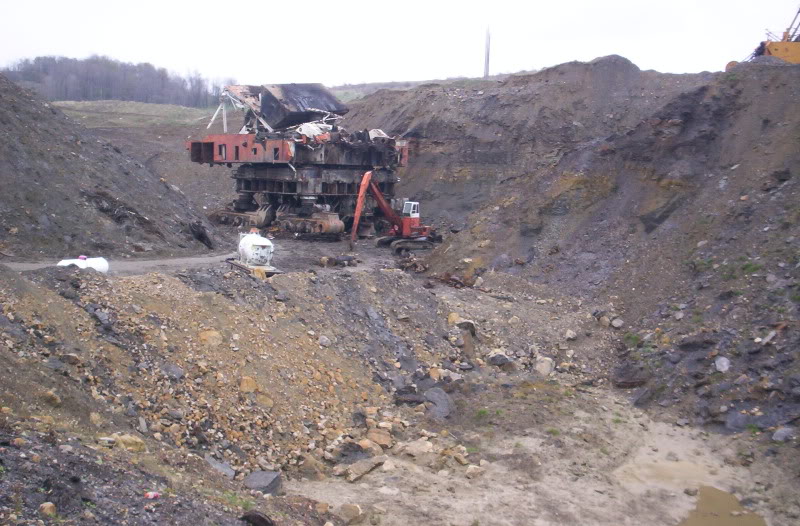 Behind me is the exact spot the Spade sat above, now reclaimed and only 3 years later:

Moonscape before reclamation: Illustrates the high wall and spoil banks of surface mining 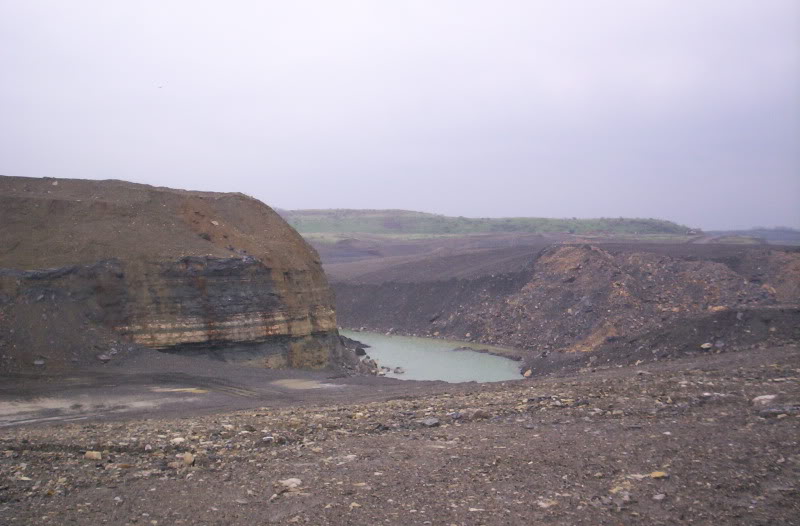 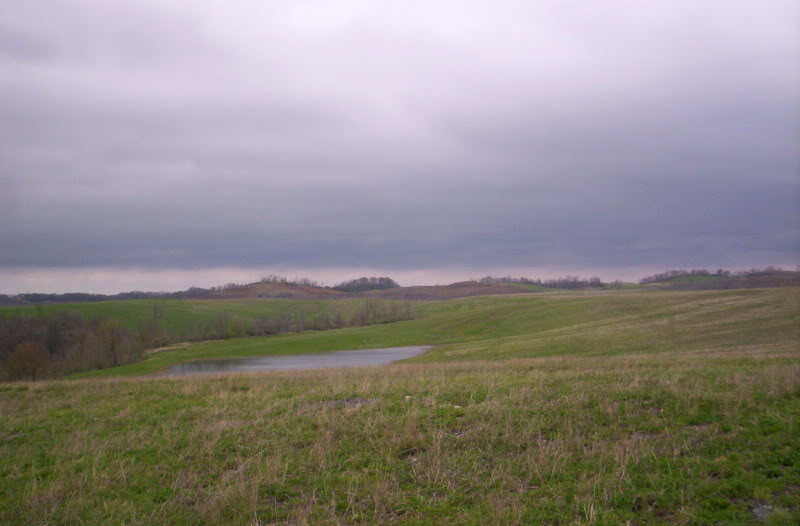 More (older)reclaimed moonscape: Sometimes tracts of woods evade the mining. The back of the land I own is to the far left. It was mined in the 40's thru the 60's and now has mature 60 year old hardwoods on it. It is absolutely spoiled with game and wildlife. All the lakes have good fish and there are good potable springs everywhere. 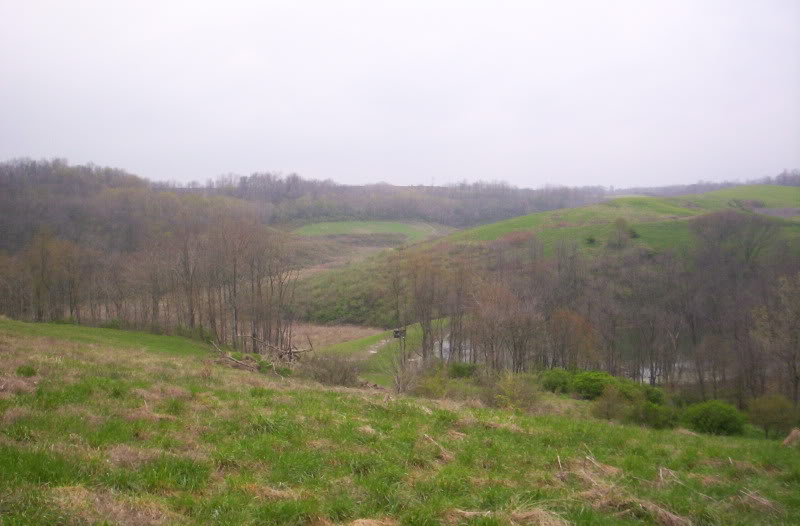 This is an example of unreclaimed moonscape. This was left years ago before the coal companies were required to do reclamation. Here you can see why the high walls are dangerous if you are busting ass through the woods on your bike. A fall of this wall and they won't have to bury you at the bottom. They do make some great places to ride, shoot and fish. This is just a tiny lake and wall. Most are much bigger. 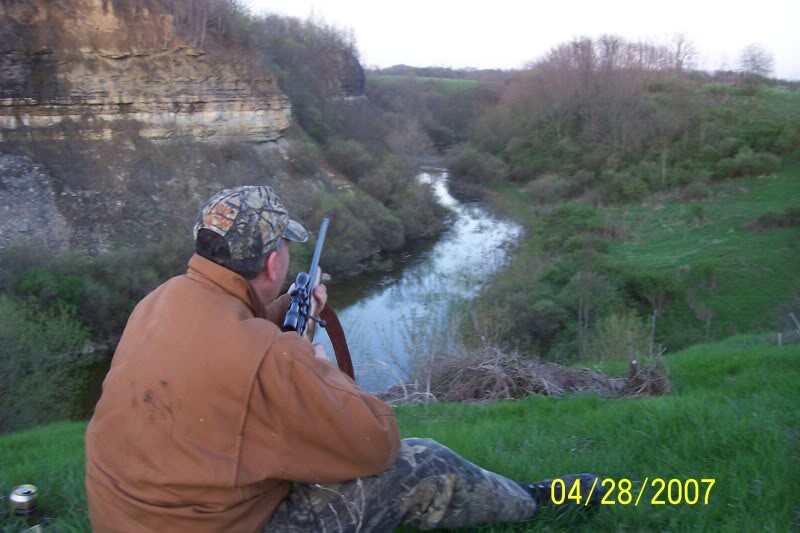 More unreclaimed moonscape probably mined in the 40's or 50's. 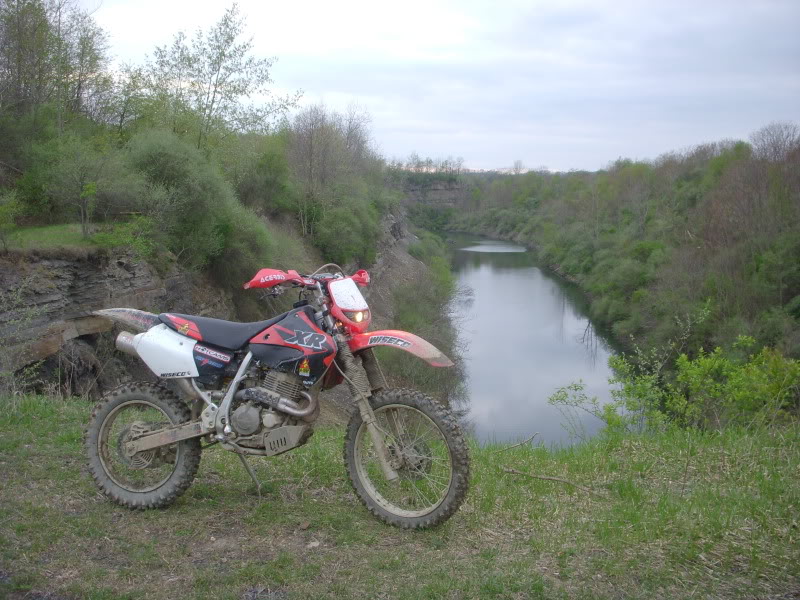 Bubble Boy lighting up the lake with an AK....because he can. There is NO ONE and nothing around for miles. You can do ANYTHING you want out here (ride, shoot, hunt, fish) unmolested by the law or anyone else for that matter. 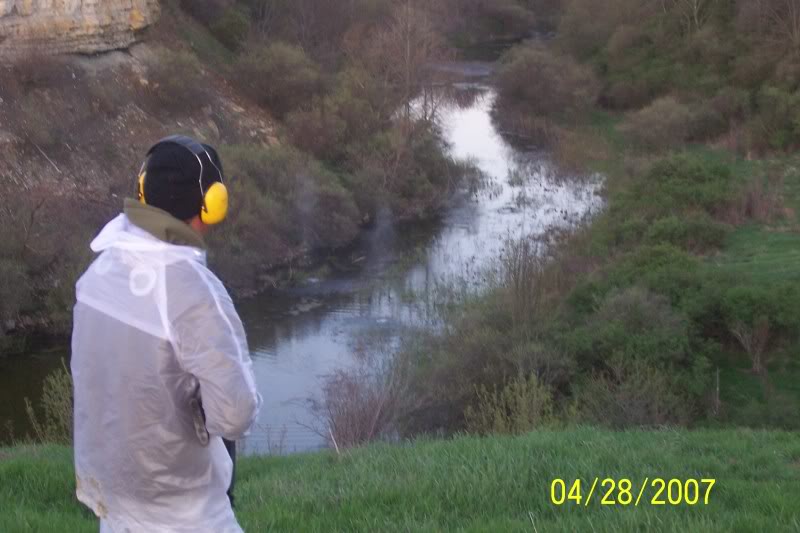 These pics are just some of the areas around me. There are also vast tracts of woodland with mature hardwoods that were mined more than 60 years ago. Thats where the single track riding is at. It's real challenging because a lot of it is like riding 200 foot high whoops with boulders and big trees. It will always remain uninhabited since it would be virtually impossible to do anything with it. The only reason people buy it is to hunt and enjoy the wilderness.That's what makes this place so cool. No people, No laws, vast areas of just shit that I like!