Ricky Brabec brings home the gold for Team Honda and the USA in the 2020 Dakar Rally.
Brabec finished second on the final stage to Honda teammate Jose Ignacio Cornejo on today’s stage by 53 seconds, but it was enough to give him a comfortable 16:26s victory over Rockstar Energy Husqvarna’s Pablo Quintanilla, with two-time Dakar champion, Red Bull KTM’s Toby Price, third in the overall standings.
The win is redemption for Brabec, who was leading the 2019 race until he retired with a broken motor.
“It’s a dream come true,” Brabec said at the finish. “Hopefully we can come back next year and repeat it. I know that it’s not going to be easy as the Husky and KTM boys will be breathing down our necks. I’m really excited to be here for Honda and for America as well. To be the only American to accomplish this goal is amazing. I think it’s really a dream come true. Now we’ve got to set our goals higher and accomplish more.”

After crashing on the final stage of the 2019 rally, Pablo Quintanilla made amends with second overall in 2020.
Quintanilla’s second place was the result of a solid second half of the rally, where the Chilean took two stage wins to move ahead of Price in the overall.
“I feel amazing,” said Quintanilla. “To spend most of 2019 in recovery and now to be here with my best ever result makes me extremely grateful. I never thought that I would be in this position at the beginning of the race. A podium at the Dakar is like a dream come true, especially after such a hard one this year. I still want that win so I’ll work hard and be back next year.” 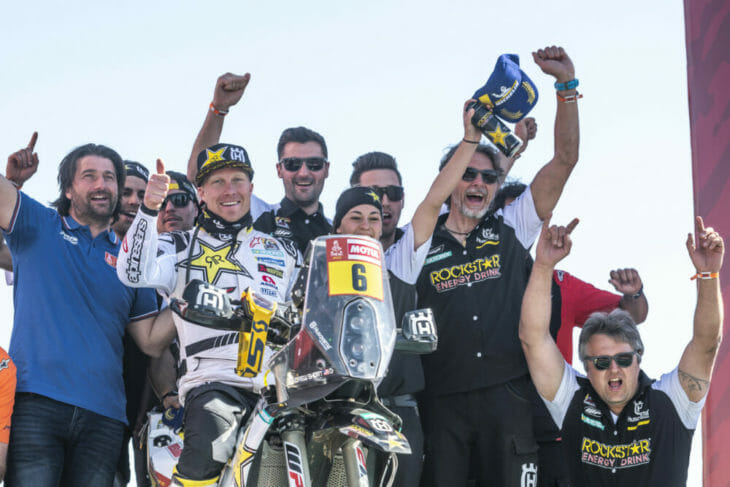 Andrew Short came home 10th overall in his third Dakar Rally.
Quintanilla’s teammate Andrew Short came home 10th on stage 12 to finish his third Dakar in 10th overall, one place behind the impressive Skyler Howes (KLYMCIW Racing Husqvarna).
“I’m really happy to get to the end of this year’s Dakar—it’s been a long race, good fun, but very tough for me, I had a lot of challenges,” Short said. “The first week in the north was beautiful – I’ve never raced anywhere like it. I had some issues in those first few days that really put me on the back foot for the rest of the event. It took a lot out of me as you prepare all year for this race and to have such a big knock so early on was tough. This is only my third Dakar and I’m still learning. A two-week event like this is certainly different to a one-week world championship event and you have to be able to gauge your speed the whole way through. I definitely want to be back here next year for Dakar 2021.”
Kyle McCoy (BAS Dakar KTM Racing) placed 60th outright after taking 58th on the final stage of the rally.

3 Americans in the top 10! Look at Skyler Howes 8th OA for a privateer