I was not able to make it down south to the desert so we had to ride somewhere. So, my friends Squirly426, Zman13, and I went camping at Moon Rock, Nv. The weather was supposed to be but cold but not raining or snowing so we went for it.

Squirly426 and I left my house Thursday @ 3pm and headed out for the four hour drive to get to camp.
We get to where 70 and 395 meet and head up the 395 to Red Rock Rd. which is the back way into Moon Rocks. Well, we should not have gone that way. It was not too bad but the roads were covered with 2 inches of solid ice, We were in a newer van only with traction control and no 4x4 and were towing a trailer. Took us about 1.5 hours to make it the next 8 miles to camp.

We get to camp and it's only 15 degrees outside so fire is priority. We instantly get a pile of wood out and douse with gasoline to get started. I'm not fucking around at this point with trying to get one started the old fashion way. Ok, so fire check! Set up EZ-UP and chairs along with beds the back of van and the little propane heaters.

Next was the beer drinking session along with my own little safety meeting as Squirly does not prefer to be safe. Just me and Squirly braving the elements as the temps drop to 11 degrees or colder that night. We were actually quite comfortable with the 5 layers of clothes and the raging seasoned oak fire. Plus, having a few beers in you does not hurt either.

We crashed about midnight in anticipation of riding the next day and waiting for our buddies to show up. We got up in the morning and poured water out of a gallon jug into a metal pot for coffee and it instantly turned into a mountain of slush and froze solid.

So, Squirly and I get our bikes started and head up Dogskin ridge to see how far we can make it and take some pics. I made it about 3/4 of the big hill climb before the snow took me over. Squirly on his KTM540 big bore beast made it to the top and was just throwing snow everywhere. Oh, and my bike would not start in these temp with no kick start. I had to be towed and bump start both mornings. I think the oil was so cold it was not allowing the gears to move very well, because it had spark. We did about 7 miles of goofing off waiting for mike and took these pics.

While sitting on Dogskin ridge I finally see Zman13's truck barreling at about 55 down the frozen road to camp like a madman. You can tell he is ripping it and having fun. So, I head down to meet up with him while Squirly makes his way down from the top.

While sitting on Dogskin ridge I finally see Zman13's truck barreling at about 55 down the frozen road to camp like a madman. You can tell he is ripping it and having fun. So, I head down to meet up
with him while Squirly makes his way down from the top.

After meeting up with Zman13 and getting his tent and camp set, he geared up so we could go for a nice after lunch ride. We headed out and found some epic soil along with some crazy ice and snow. Temps were in the mid to high 20's while riding.

After our first little safety meeting we head out for more awesome dirt but find deep snow and ice instead. It was very slick in spots and difficult to get momentum. The DRZ seemed to actually do well in this case for once. No snow naps for me!

Here's where it gets interesting!

You can tell that we are starting to get into the nasty stuff. The ground under the snow is frozen solid and covered with about an 1 or two of sheet ice, covered in about a half a foot to a foot of powder. Oh, and woops are very decieving when they look level because of the snow. You just don't know how deep they will get.

The little black spec in front is me getting the fresh line.

One of the snow naps he hurt his knee again so that was not so good! It was not easy to get down these hills with the ice and then the snow being frozen, you would constantly float and sink and float and sink. I was lucky enough to go first and follow rabbit tracks as opposed to tire tracks. I would have had a snow nap for sure if I had to follow tire tracks.

So, we get back from riding and stoke the fire to get warm, change out of wet gear and start the beer drinking. We are waiting for Niles who went with Zman13 and I last year on our 8 day desert trip to Spangler. He is driving up from Placerville for the night to party with us and have a reunion of sorts.

Niles arrives and he is called "WingDing" for a reason. Dude is a totall goofball. He brought some bottle rockets but no beer.

We had some fun at midnight and lit off some sobe bombs along with a christmas tree. It was bright! 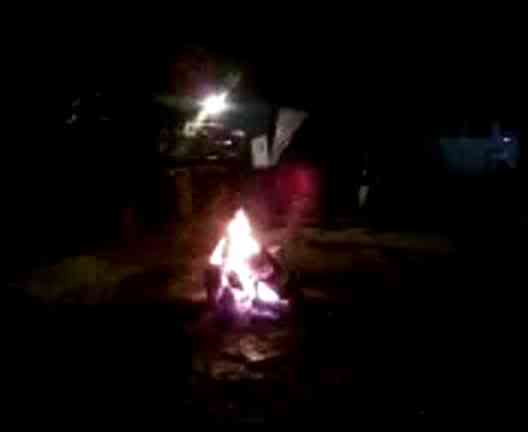 After the New Years bufoonery we all crashed expecting a good days ride as more snow would be melting off.
We were totally wrong and woke up to snow flurries with a new 2" on the ground and no sign of it stopping.
So, at this point we decide it's game over and pack up to head home to make sure we get over the passes on the way back.

Squirly and I left and Zman13 and Niles were going to go wheeling their trucks. Here is some pics Zman13 took while wheeling.

As, we thought it was a good idea to get home as the passes were blizzard like and packing in quick. No need for chains and made it home safe. We went the long way to avoid the back way we came in. Good times and a great experience. I feel a sense of accomplishment knowing that I can survive and ride dirt bikes in extreme weather conditions with the right equipment and lots and lots of firewood. 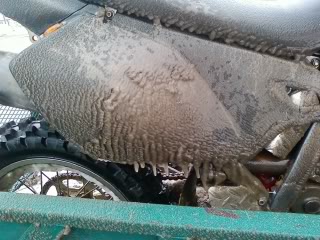 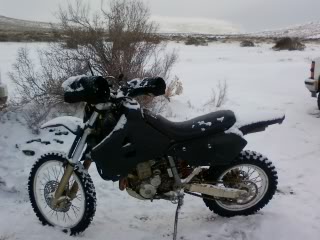 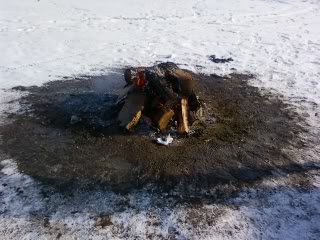 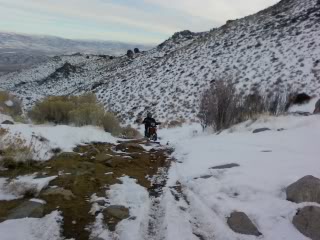 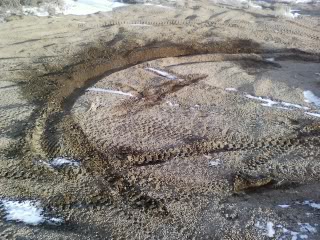 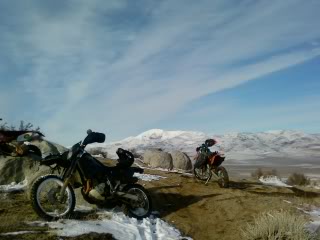 That is a hellva adventure Rock!

I want to get out to the dez this spring.

Great pics! Hey you guys have bigger balls then a snowman! Haha

Lot's of peeps pussy out when the temps take a dive! Especially in the teens or less! Kudos to you! I just think it makes things more interesting in a different way, huh?

You almost could have gone snowmobiling.

Curtis74:
You almost could have gone snowmobiling.

Yeah, I was really wishing I had one of those trax for the back of the bike and a nice spiked front tire. That would have ripped through that stuff.

Great ride report. Good to see a little snow a low temps did not keep you home instead of riding...

Either that or I just have the ability to shut my brains reasoning off!

It wasn't much warmer @ Spangler area, ice crisp out.

That is way too hard core for me. You da man!

That is a freaking fantastic adventure. Though.................................. Even though I only live 20 min drive from the Moon Rocks. You would never find me out there in those conditions riding. Let alone, camping out like that. Sure you can call me a pussy all you want. But being a resident of the area and knowing how unpredictable and miserable the weather can be. I chose to stay home where its warm. I did get out riding the atv's with the kids. It was fun.
Share:
Reddit Pinterest Tumblr WhatsApp Email Share Link
Top