A Week In Spangler

Way back, sometime in September, Snow said he was doing the NHHA Series in 2018.

Being that the opening round was usually in Lucerne, which is very close, and since I haven't had a Dez camping trip in multiple years, I thought that this would be a excellent event to crash with the POS and Crew.
The wrenching started with a planned shakedown over the New Years, then came the rotten fuel return line on the POS. So we did a shake down ride only, which was eventful in itself.

With vacation for BH and myself approved, things were coming together, then something about a BLM paper werk problem, the race was changed to "Red Mountain @ Trona Road."
We scouted that area for a camp site, which a great one was found, then the week before depature, I zeroed in on the GPS coordinates, and realized it was at Dirt Diggers Spangler.

So plans were switched to Prospectors Camp in semi local Spangler, and on the day of departure, after diving around for final fill ups and dumps, 10 minutes parked back in the drive way, the anti freeze puddle started to form. Barzall was bought and "installed", and final prep was completed. This should have been a realization of things to come.

By the time we were on the road, Friday traffic and 35 MPH on the uphills, we didn't get to camp until very late. Fed the dog, had a beer, and went to bed. The next AM, we scouted around and move the rig to a permanent spot, and set up camp. 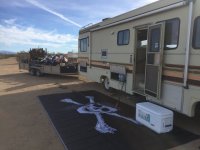 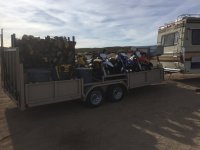 Well come one. Out with it already...

In the middle of "resizing."

timoyz:
In the middle of "resizing."

Oh, you are just wrong in the brain on so many levels.

Ah yes, A hill in sight 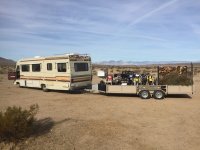 By the time we set up and got on the bikes Saturday, it was close to Noon. We hit the pit area for H&H, but with the kids races going on, there was no Snow in sight. We crossed the highway and rode some epic single track, but when I came to the end the was a little berm I climbed, when my bike sputtered and died. After fiddling and giving up, a truck was dispatched for me, where we made it to camp for beers and food.
Trying to get the 04 running Sunday AM and failing, I switched to the 490, which had a fuel leak, I rode Wendy the 250 over to watch the start.
I believe this would be the back side of Snow. 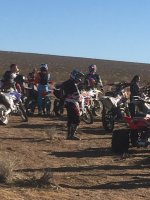 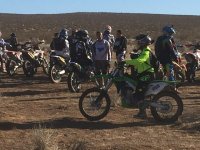 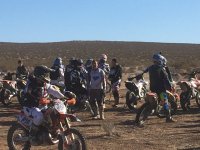 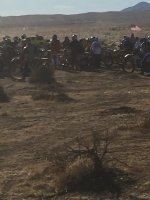 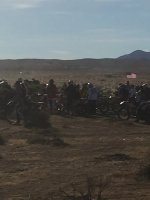 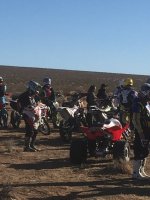 Somewhere on the second loop. 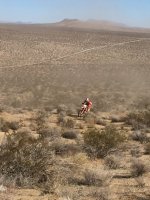 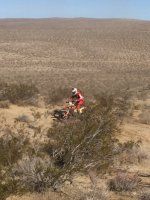 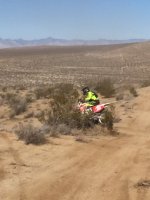 At the H&H start, Butt Head was going straight back to camp to eat, so Timo jumped on the 07 WR, and with Rolls we went and watched a couple different spots on the course. and on the way back to camp the expected flat tire came. 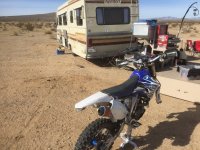 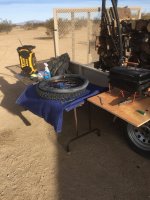 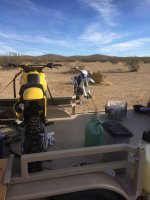 Before the trip was made I realized I had 4 rear tubes, and no front. So being the cheap bastard that I am, I bought one, and immediately pinched it. Checking the rest of the camp, the realization came that there weren't any other fronts to use. A more thorough float adjustment on Old Yellow, proved however to work, so I beat it over to hopefully catch Snow come across the finish. 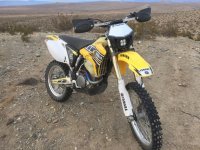 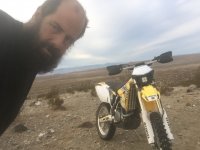 Snows pits were easy to find, since his bike was in the back of a chase truck on pit road.

Hung out a while and talked, Rolls showed just about the time Elizabeth crossed the line and was screaming like a Banshee to get her some wet one so she could clean up before her interview.

That was Rolls and I cue to go out and get 30+ miles in before back to Sunday night camp with cerveza and ... 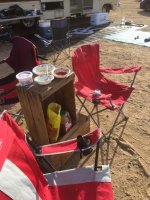 is that bigfoot looking at the trail cam??

MikeinFresno:
is that bigfoot looking at the trail cam??
Click to expand...

Yes, the elusive High Desert Sasquatch. It would sneak into camp and steal our cookies and beer.

Rolls:
Yes, the elusive High Desert Sasquatch. It would sneak into camp and steal our cookies and beer.
Click to expand...

But it does make a killer mexican burger..

I lurves your Ride Reports Timo!

PALMER84ONE:
But it does make a killer mexican burger..
Click to expand...

Now if I could just get it finished.

I dig that vintage black -n- yeller 2 stroke you have there in yer trailer. Looks like yall had fun...