I came across a bike today on craigslist called an MZ Baghira 660, a supermoto (or enduro) German bike with a rebadged Yamaha 660 four stroke. I had never heard of the name and I started looking up the company and it's history and I came across a lot of cool stuff about this company that I wanted to share. The motorcycle/auto history is rich in this company's history, and so is the production of the modern 2 stroke (including one of the biggest scandals in motorcycle history)


Motorenwerke Zschopau (Zschopau engine factory) is a East German manufacturer located in Zschopau, Saxony. In 1907, the company is founded by Jørgen Skafte Rasmussen as bicycle factory. Later he creates the steam powered car called the DKW (Dampf-Kraft-Wagen: steam-driven car), while the steam powered car was unsuccessful, the company was renamed to DKW. Two-stroke engines are produced starting in 1919, and the first motorcycles are built in 1922. Three years later, the first German motorcycle assembly line was created at DKW in Zschopau.

Starting in 1932, the Auto Union is created with DKW, Wanderer, Audi, and Horch. The logo was the four rings that Audi uses today. At the start of World War II, all Auto Union factories are turned over to war-production for the German army. DKW begins manufacturing aircraft components, while the motorcycle department continues to build motorcycles for the army. In 1945, although managing to avoid serious bomb damage, the factory is completely stripped of all it's usable equipment by Soviets in an attempt to cripple any industrial production. DKW's RT125 motorcycle designs were distributed amongst the Allies as war reparations, resulting in the Harley Davidson Hummer, British BSA Bantam, and Soviet's MMZ M-1A Moskva.

Then comes Walter Kaaden, the man who will change two-stroke motorcycles. In early 1953, Kaaden has command of the MZ race department. Walter Kaaden was a literal rocket-scientist who, during WWII, helped develop the Hs 293 (radio-guided rocket-propelled missile). After Grand Prix banned superchargers, Kaaden developed MZ two-strokes combining disk valve induction and expansion chamber exhaust. Although the expansion chamber was not technically invented by Kaaden, his understanding of resonance waves led him to create expansion chambers as effective as they are today. The previous expansion chambers were created by Erich Wolf (DKW). Kaaden, using an oscilloscope, examined exhaust resonance waves to create profiles to maximize engine efficiency. The result of this development program was a 125 two-stroke that produces 100 bhp/liter. The engine was later developed to produce 200 bhp/liter in his 1961 125cc racer.

MZ's was a great success in Grand Prix racing, leading to East German propaganda and their Communist star; Ernst Degner.

Then comes what some call the biggest spy scandal in motorcycle history involving Degner selling MZ secrets to Suzuki:

The 1961 MZ 125 was a rocketship. Another winter of noisy, sweaty toil on the dyno had rewarded Kaaden with another two horsepower, taking the MZ to 25 horsepower, its workable powerband a whole 400rpm wide: 10,000 to 10,400rpm. The MZ was now the fastest motorcycle in the world championship.

Suzuki knew they didn’t have the time to learn Kaaden’s secrets the honest way. That might take years. Eventually, company president Shunzo Suzuki had to admit that Degner seemed the only way out of the mess they’d got themselves into.

Degner knew the MZ engines inside out and Petry (decorated two-stroke tuner) knew how to make a two-stroke fly. They wondered if they might offer their two-stroke expertise to the Japanese. It would be the perfect solution to Degner’s problem and it might just make both of them rich men. Petry would have to make the first move. Degner was watched by Stasi informers within the MZ team and by sportskommissar Hartmann, the urbane Communist Party man who kept an eye on things at every grand prix.

Suzuki weren’t just paying Degner for his riding skills. He would bring with him the full range of MZ’s engine secrets. He would then travel to Japan at the end of the season, accompanied by Petry, and spend the winter there, designing, building and developing Suzuki’s 1962 grand prix engine, using all the knowledge he had absorbed from Kaaden. The contract stipulated that Degner’s 125 must make at least 22 horsepower on Suzuki’s race shop dyno if he wanted the full £10,000.

During a secret meeting in town Degner and Petry signed individual contracts with the Suzuki Motor Company that would change the face of motorcycle racing for the next half-century. The deed had been done.

Degner arranged for an escape to the West for his family while he was at the Swedish Grand Prix. He was on his way to winning the 125cc World Championship, but his engine failed early in the race. East Germans then accuse him of deliberately destroying the engine after he had defected to the West. After the race, he got on a ferry to West Germany and met up with his family who had safely defected East Germany. Degner headed for Japan to sign with Suzuki with a head full of MZ secrets. In 1962, Degner won Suzuki's first Grand Prix on a Suzuki that resembled an MZ.

In 1983, Degner died under mysterious circumstances. Degner was dependent on medication after a crash that left his body with over 50 skin grafts, and his death possibly occurred due to overdose. Although rumors started, stating he committed suicide or was killed by the East German secret police (Stasi) to avenge his defection of East Germany.

1991: MZ sales drop dramatically, because the old communist market has vanished and the bikes are not attractive enough for the new market.

1992: the MuZ (Motorrad und Zweiradwerk) brand is established. Only 80 employees are left, but they are enthusiastic: the first new models, now with ROTAX four stroke engines, are a hit at the motorshows.

1996: MuZ is bought by the Malaysian corporation Hong Leong Group

2008: On 9 June, Motor Cycle News reports that MZ is to cease operations at the end of 2008 because the company's Malaysian backers had withdrawn their financial support after years of continuing losses.


Sorry, I got lazy there at the end and just started to copy and paste.

It's getting late. I hope yall enjoyed this bit of information as much as I did. Google it if you have the time, there's a lot of information I left out. Also, that excerpt from Stealing Speed: The Biggest Spy Scandal in Motorsport History contained in that link is a great read.

Phucker!! all that reading anticipating a pic at the end

I forgot to mention, they made a line of pretty sweet supermoto bikes and enduros under their new owners prior to shutting down in 2008.

Their 660cc line of bikes using the Yamaha 660 are Black Panther/Street Moto, Baghira, Enduro, Mastiff, etc. Unfortunately there is not too much information on their most recent bikes and of course parts will be hard to find. From what I hear, people love their line of supermoto bikes. 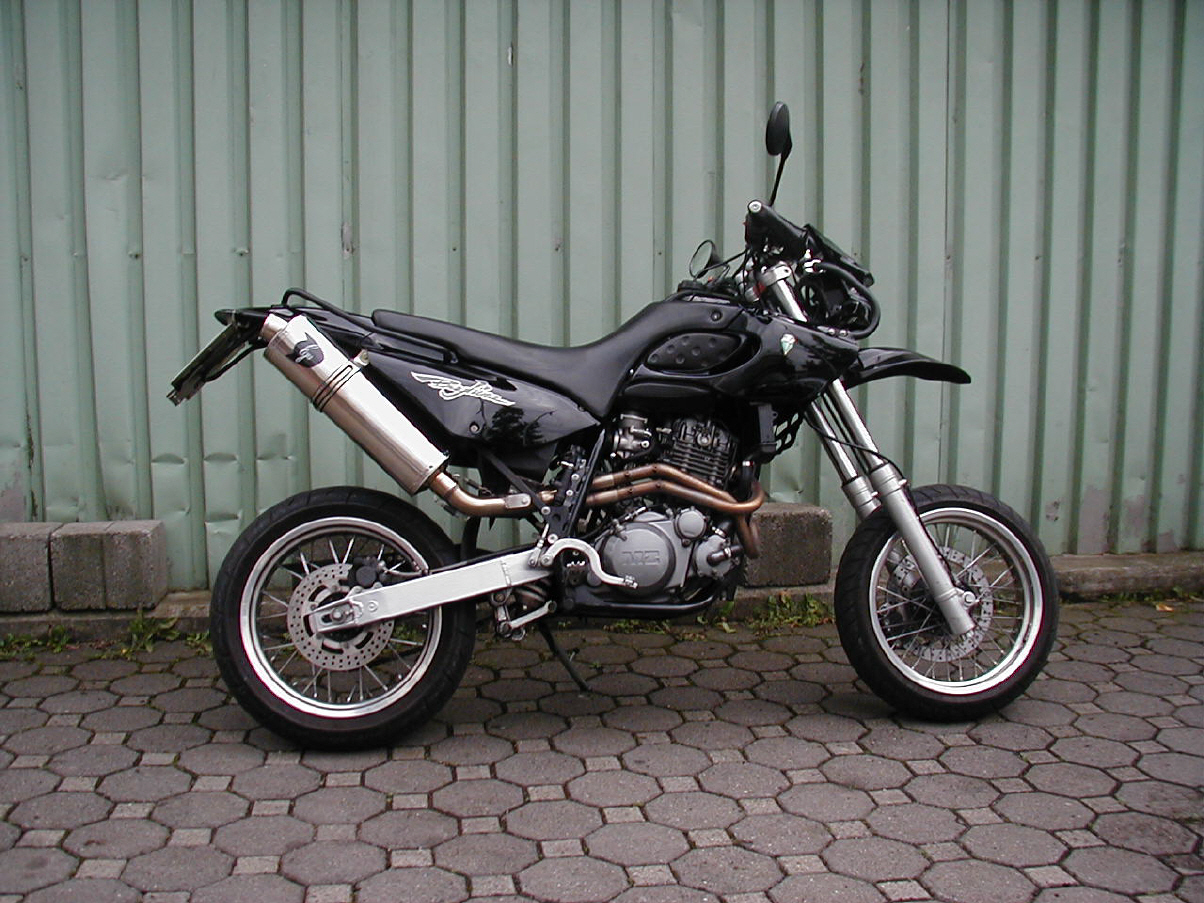 jackson409:
Phucker!! all that reading anticipating a pic at the end

There you go! That's the Baghira.

There you go! That's the Baghira.
Click to expand...

It's got a weird style, but it's unique. It uses a WP rear shock and Marzocchi forks and a Yamaha engine.

Here's a good review if anyone is interested.
http://www.roadrunner.travel/magazine/read/winter-2002/page/86/

There you go! That's the Baghira.
Click to expand...

Do they have a "mowgli" model? You know the kind with the "bear necessities"?

Thanks for posting that. I have a book by an Italian author that was the driving force behind their gokart engines, Comet etc. He gives a great deal of credit to the engineers from mz. There was some cross pollination between MZ and NSU at one time that resulted in some early supercharged two strokes, ones that utilized a piston to move air fuel mix to a piston.
K

They were pretty good at the ISDT back in the day.