Me and my daughter entered a local enduro race Sunday, it was a 3 hour race on a 5 mile course and tight woods riding, at the end of each lap there was an obstacle section including fallen logs and tires, not difficult but fun. Other than a test run at the MX track, it was the first time back on a bike since before my hand surgery, I still have stiffness in the hand and limited range of motion, the strength is probably at 20%, so this obviously presents problems with my clutch hand.it may have been the hottest day of the year so The all black riding gear and my 30 pound pack were a good choice as well. There were about 75 riders ages ranging from about 10 to 60 or so. When the race started I was behind my daughter to make sure she handled herself ok as she was on a friends bike(02 YZ 250) at first she was doing well but as we got into the tighter slower sections she began stalling, falling and overshooting corners, I was afraid of this as the bike is running 13/48 for gearing. She did the best she could but ended up scratching after the first lap. For me the first lap took much longer as I was helping Becki out of her jams, and as I began the second lap I noticed my hand was losing strength, so I tried to pull the clutch only when necessary and rely on throttle control to keep my momentum thru the turns. I found it difficult to stand because it seemed to cause discomfort in my left hand and arm, so I mostly rode sitting, this was ok except for my lower back was really taking a beating, however I still had a better lap. On the third lap I started to realize that if I changed the position of my bum hand on the bars, I could stand on the pegs and this helped me with my back and allowed me to settle into a good pace that really helped me find a comfortable groove, this continued for the 4th lap as well, at about the hour and a half mark I suddenly hit the wall and was struggling to maneuver the bike properly, I had a couple close calls with trees and over ran a few corners, I was seriously considering scratching as I was concerned with fatigue and getting injured as a result. When I crossed the check point on that lap my daughter was there cheering me on, somehow I got my second wind from her cheering, so I decided to do another lap. At this point I noticed I was low on gas and had about 45 minutes left in the event. I decided to click up into 3rd gear instead of 1st and 2nd and was able to navigate the course in a more fuel efficient mode, I was more familiar with the course at this point to allow me to be able to ride in that gear. However my familiarity with the course by now may have caused me to become overconfident, I was choosing my lines well but was really running to fast for my talent level when I overshot a corner and ended up in a tree, the bike fell and by the time I picked it up and got her started I felt as though my mojo was gone and while I wasn't hurt it seemed like a good time to take a break. At this time I realized I had 20 minutes left in the race and was about 15 minutes from the check point. So I took a 5 minute break and got back on my way, strategically getting me thru that Lap after the 3 hour mark. They had an option for a bonus lap and when asked if I wanted it I quickly declined, bI finished the race and didn't run out of gas, and that was my goal, just finish..... I felt bad Becki didn't do better but I'm relieved that she didn't get hurt and my hand was able to do well enough to do the job. 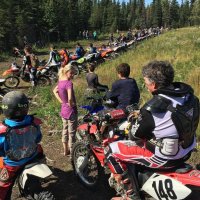 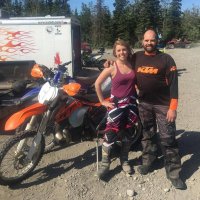 time for a rekluse

Awesome write-up Steve. Glad to hear you're back on the bike.
I was wondering how that hand was doing.

Trfsrfr:
Awesome write-up Steve. Glad to hear you're back on the bike.
I was wondering how that hand was doing.
Click to expand...

My finger is pretty upset at me but , other than that it's hard to complain.

so basically you're old?

To some of the guys out there, I'm a young pup.

Hopefully there will be one or more events to come this year, this one was the 3rd in this years series. but the first one I was able to enter.

2strokesteve89:
Hopefully there will be one or more events to come this year, this one was the 3rd in this years series. but the first one I was able to enter.
Click to expand...

Well if you would stop letting engine blocks fall on you the you might make it.

Mihylo33:
Well if you would stop letting engine blocks fall on you the you might make it.
Click to expand... 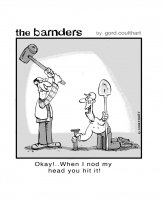