doing what u love and adult life

ok so when i ate shit earlier i bruised my knee and thought it wasnt bad and i could still power thru work so i thought not too much of it..well hours later its swollen as fuk and altho i still think its not bad it hurts like a bitch when im putting pressure on it at work (warehouse work)...i got thru one hour and it started to get worse so i told my boss and he sent me to the nurses office to ice it and then he sent me home...now it made me think, even tho fuk i hate thinking like a damn adult, all the shit i love and live for (extreme sports) is interferring with my job aka money, is there a balance to still doing what i love and being 'an adult' when an injury is putting my adult life on the line...is anyone else going thru this? i kno a part of me wants to just say "fuk it, just try to not get hurt" but come on, like we plan for that shit....

Staff member
Damn, that is a baseball!
Yeah, I know what you mean. Can't be out huckin' 40' doubles back to back and expect to make it to the office monday morning. I'll stick to the trails until I win the lottery or something.

I have been chatting with other sportbike riding folks about the amount of risk each person is willing to accept in their lives. It varies from person to person, but typically the main thing we all have in common as motorcycle riders is we can't live without them. -BIG DAN

I'll see your knee and raise you a thigh 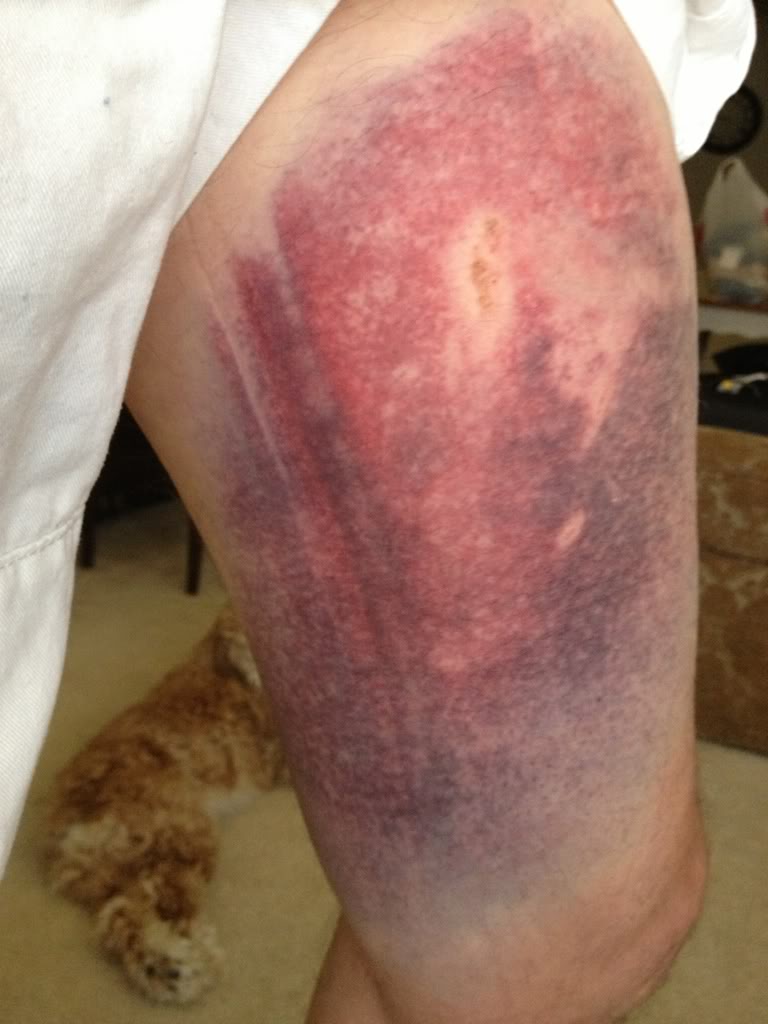 Can't really worry about it. Can't blame the bike ya know. I'll be 49 this year and still rather do a 80' table than a 40' double. Something about that gap...

2Wheels:
I'll see your knee and raise you a thigh

Can't really worry about it. Can't blame the bike ya know. I'll be 49 this year and still rather do a 80' table than a 40' double. Something about that gap...
Click to expand...

holy shit! i feel like suuuuch a pussy haha

ps..what do u do for a living and how do u get by living this life and keeping a job?

This thought comes across my mind more often than not with an increased work load, truck payment, and other debt.

Every time I unload the bikes the thought of injury crosses my mind, but I try to stay inside the 80% rule, meaning ride at 80% of your capability so you have that 20% reserve to bail yourself out of a jam.

thrashgal:
ps..what do u do for a living and how do u get by living this life and keeping a job?
Click to expand...

I go to work sore! Fortunately I'm the boss/owner of my plumbing company so I can take it easy on myself and take random days off. (usually beautiful random riding days
off ha ha) I'm not trying to say you're a pansy for the knee not my meaning at all just saying you're not alone there. Pad up is
The best you can do and as Steve says ride inside your comfort zone. 17 yr old son wrecked ACL last year on the 125 got it repaired and he wrecked it again this week on the 450 and had surgery yesterday. As he was going under said mom please don't sell my bike. fkn-a no way son. If you wanna quit that's one thing but we'll never take it from you.
My story? ok here ya go
Jan 09 I went over the bars landed flat on a camelbak full of ice and water broke L-1 & L-2. Went into hospital in Jan and they sent me home in April in a wheelchair. First 3 weeks I was paralyzed from the waist down. Dead legs- nothing. Scary feeling for sure. Slowly got minimal feeling back but couldn't move. They gave up on me and sent me home after 90 days of rehab. Sent me home with all the medication in my file cabinet which was like 350 hydrocodones. I had em gone through in the first month. Eating 5 at a time fucking self-pity drooling wheelchair vegetable drug addict. Wife barely paying all the bills truck repo'd and sold my bike. Finally after a few months of this I took a hard look at myself and went after my rehab all on my own. No coach no pills no bullshit. A year and a half later I couldn't get a job cause I could barely walk so I started my own company. 6 years later I couldn't be happier. My company is a success beyond imagination. Years ago I told my wife I was going to buy her a new house and that's what I have done. She hasn't paid a single mortgage payment or bill in years. Do I still ride? Damn right! Got a garage full of bikes. Is it still scary? Damn right! I didnt get up out of that chair so I could hide in the corner. I'm proud of who I am and what I came from. I didn't die and sometimes I wished I had believe me, but as long as I'm alive I'm gonna live. You think that cancer kids and leukemia kids would be timid and afraid if they had their burden lifted? Id like to think not. Id like to think that if given the chance they would be up out of that hospital bed skateboarding and swimming and windsurfing and dirt biking. You owe it to them to live the life you have been given. Don't waste it being afraid, they wouldn't.

Very good for you John, not sure I would want to live after feeling that pain and no feeling in my legs. bummer for the knee Jessie.
Not as bad as John but shitsville.
I used to be a real damn good MTB'r back when it started in the early days (late 80's) Used to go to Mammoth every year with a group of guys. None of them could come close to my time on the Kamikaze Downhill run. Pros used to do it in under 6 minutes and I was just over that. (They are probably under 5 now with all the technology bikes have). I was slow peddling up hill, but would always catch my group on the downhills. Anyway, casual ride accross my local mountain one year with a couple friends and I came around a corner, hi sided a rut strait into a wall of jaged rocks. Skinned my patella tendon off my knee cap like an orange peel. Two surgeries 6 months later I could walk again. I had 5 kids under 8, and found out one more on the way as I laid in the hospital bed getting prep for surgerie #1. Was out of work for the time being (Gov. job so I was covered by insurance and after all my time off was used up, catastrophic leave (employees giving their vacation time to me) kept a paycheck coming in. Got back on the bike and continued my lifestyle for a few more years. Realized I was to old for this shit (mid 30's LOL) and grabbed the throttle again. It had been over 12 years since I had Moto bikes, and the wife couldn't stop me. Got the kids bikes, and I just ride trails, etc. Used to track back in the late 70's but I'll leave that to the kids, and guys that can. I like the wheels closer to the ground now. And yes, I will use up 80-90% of my comfort zone on any given ride, can't keep up with my youngest 20yo now, unless I keep him on my rear tire. Riding moto I have not been hurt as bad as MTB.

I ride within my limits nowadays. No more big doubles, nothing to prove here except to myself. I also don't ride hard when I'm exhausted or push the envelope when I'm tired. That's when mistakes happen and I've seen too many lives and careers end as a result of that.
You must log in or register to reply here.
Share:
Reddit Pinterest Tumblr WhatsApp Email Link
Top