An unforgetable day riding in the Cardamon Mountains, Cambodia 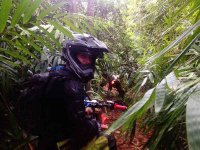 Haven't posted for a while... been too busy riding! This is one of the days from a recent ride with a couple of mates who came over from Australia. The great thing about living in Cambodia is that so many people come through, there is always an opportunity to get on the bikes and go riding. Angkor Wat is great, but to truly experience Cambodia you gotta get on a bike. The boys wanted to ride the Cardamons down to the south as it offers the most challenging riding with a wide variety of terrain. My riding buddies were Ian, Scott, Tim & La; all accomplished riders, so we had a blast. This is from day four of our trip, on the trail from Koh Kong Town to Chipat, nestled in the heart of the Cardamon mountains. 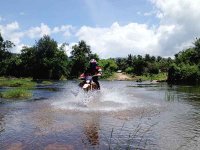 We had all been anticipating this day, being the most technical section of our journey. It can be taxing enough in the dry season and the fact that it had been raining nonstop overnight would put all our skills to the test. It was sunny when we left Koh Kong; A good sign!? Hopefully the trail would have a chance to dry out a bit, but his was not to be. The riding was easy going to begin with; highway that led us to the turnoff to Thma Bang village. We were on large sweeping, red dirt logging roads until we arrived at Thma Bang. Then the road narrowed and we started to climb as we entered the first bit of the mountain. It decided to start raining and the red clay road became so slippery that we were crossing up in ruts and driving sideways a lot of the time as we made our way up & down some fairly steep hills. Soon we arrived in the sleepy little village of Areng where there’s a large river crossing. Due to the rain it was questionable whether it was crossable as the river can change into a raging torrent after several hours of heavy rain. As it was, we got across fine and after loading up on petrol, coffee and sugary sweets, we headed off on what proved to be an unforgettable day. 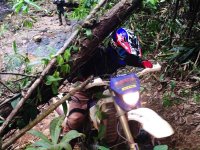 It had stopped raining, but was still pretty slippery as the trail turned to single track and we made our way through the mountains toward our first proper challenge for the day; A tree had fallen down across our path just before the entrance to a large creek, which was basically a 30 metre rock garden; easy enough in the dry, but now had filled up with water. La went first picking his way through the rocks around the corner, as we lifted the tree for him to pass. All sounded good until you could hear the unforgettable whine of an engine protesting about being dropped. I ran ahead to help La up; he’d come off pretty hard and smacked his elbow. We pulled the bike up as I noticed two even bigger trees the width of large telegraph poles had fallen across the entrance to the approaching hill climb. Strewn with rocks, roots and boulders this was a hard enough section without a damn tree in the way! There was just enough room to pull the bikes through on their sides but there had to be an easier way. I started to look for an alternate route. By that time Ian & the others had caught up. Scott approached the fallen down trees and gave one of them a good boot, causing it to disintegrate. It was rotten to the core and we had soon cleared enough space to be able to dismount and walk the bikes through. The other tree was solid and would not budge. I went first and got La’s bike to the top. It was an almighty climb with a winding rut that swallowed our bikes whole. Then we had a technical climb to the top, over boulders and rocky outcrops, and all the time vines catching on our Go Pros and helmets. Once at the top we all stopped for a rest. There was no rush …we had all day after all! 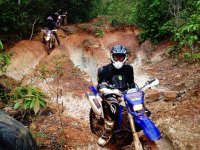 After some well needed trail mix & energy drinks we pressed on. We carried on up the hill for another 500 metres or so and then after a challenging descent serving up more of the same lay our next challenge. 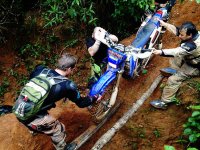 The next section was a little washed out section of the track which had been like this for years, consisting of two thin logs stretching across the washout holes with a drop either side. Basically you couldn’t ride out of it, if you rode into it, unless of course you were Graham Jarvis, who would not even bother with that futile approach; he would just wheelie [or endo across the logs] Unfortunately we were not even slightly close to Mr. Jarvis [I had tried riding across it in March only for the back to slip off and I ended up with the bike on top of me down this hole.] so it took all four of us to get all the bikes over. In March you could actually walk the bikes across on your own as the clay bank on the right was in good condition. That had deteriorated and it took a bit more maneuvering to get the bikes across, slowly edging forward bit by bit. Exhausted but beaming from ear to ear we sat down for a good 20 minutes before we continued. Everyone was pumped and in high spirits. There was a constant drizzle which kept the temperature down. In March the heat was stifling and we were all at risk of heat exhaustion. Give me more fucked up trails any day than that heat! 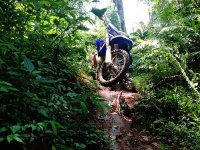 We were all pretty knackered now, as it had taken us 4 hours already to only go twenty km. This trail is very remote and due to the condition of the trail meant it would take a long time to get help if something went wrong. So that meant lots of rests and water breaks. We had one more hillclimb and descent to go, and then an easy 20 km of single track and small climbs as we dropped down towards Chipat. We got to the bottom and had a swim in a cool mountain stream. Everyone was pretty much spent now so we relaxed for a bit letting the water rush over us. It had been an epic ride so far and Ian and the boys where over the moon, man hugs all around, saying “it was the best riding of their lives. It had been an epic day so far. 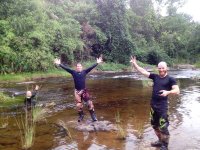 The hill climbs were over and it was mainly single track now, which was very overgrown with loads of vines stretching across the track ready to catch you unaware and you had to be careful not to garrote yourself. In many ways today was like a video game with the different levels of the game being all the challenges we faced. The next challenge was the Bamboo stage! It got so thick in places that we had to literally lie the bikes on the side and pull/push them through. Again you had to be careful driving through this stuff as I have impaled various limbs in the past due to these thickets being cut to get through them … an exaggeration but you had to be careful as they were vicious. We finally got back to civilization [sort of] and a welcome rain shower greeted us into the quiet riverside village of Chipat. We were so tired that night we could barely eat and before we know it we were out for the count. 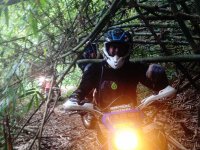 An awesome ride and my favourite trail for sure! Look forward to the next one. Who's coming over next? 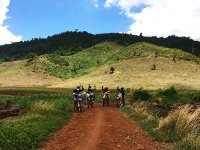 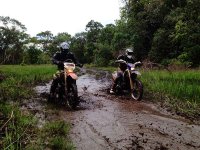 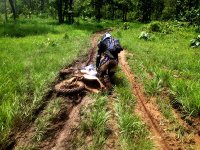 That's a great write up
Reminds me of why I got hooked on bikes in the first place -adventure!